For the first time, a completely paralyzed person walks again on his own two feet 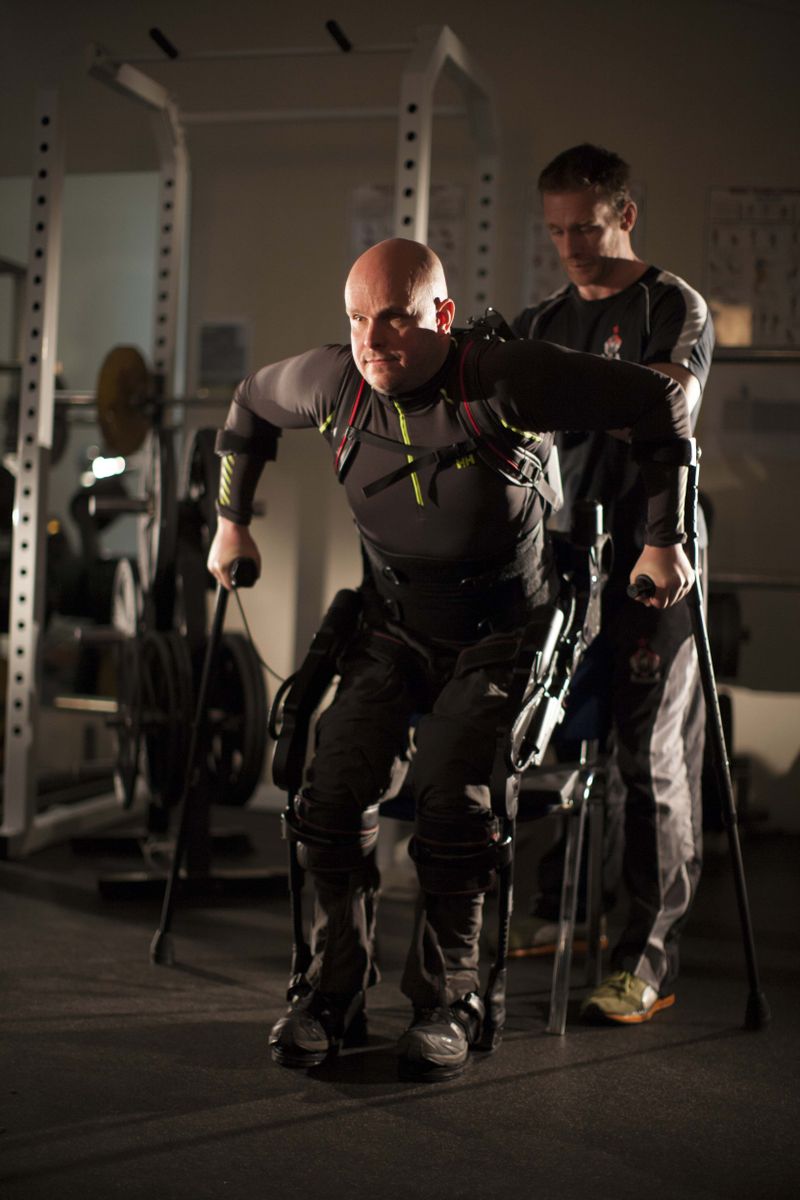 In July of this year, researchers accomplished a feat that didn’t seem possible just a few years ago. They were able to stimulate the nerves of patients who were completely paralyzed so that they could move their legs in a rhythmic pattern. Now, the same team of scientists have gone one step farther: With the help of a bionic suit, they enabled a paralyzed man to take thousands of steps during a five-day training session, and for the two weeks that followed.

The patient–a 39-year-old man who was paralyzed from the waist down four years ago from a severe fall–is the first completely paralyzed person to walk on his own. The results were published and presented at the IEEE Engineering in Medicine and Biology Society Meeting this week.

Mark Pollock, the patient, was able to walk again thanks in part to a non-invasive spinal stimulation technique (called epidural electrical stimulation) as well as a drug called buspirone, which helps to stimulate nerves and induce leg movements. Both the spinal stimulation and drug were used in the July study, which allowed five patients to rotate their legs back and forth on their own. According to the researchers, this was the first reported time that patients who were completely paralyzed were able to move their legs while lying down, without the help of surgery.

In the new study, the researchers got Mr. Pollock back on his feet with help from a bionic device that is meant to support a person’s legs and help them achieve mobility. The suit has sensors that measure how much the patient is moving his legs on his own versus how much the bionic device is doing the work for him.

The researchers believe this exoskeleton is a vital part of the training process. Almost like the training wheels on a bike, the suit adjusts its hold, allowing the patient to get used to supporting his or her own legs. The idea is that as the physical therapy sessions continue, the hold of the bionic suit lessens and the patient could eventually move his legs with as little support as possible from the suit.

Mark Pollock underwent a series of physical therapy sessions over the course of a few weeks, and then received five days of spinal stimulation training over a one-week span, for an hour each day.

The theory behind this combination therapy is that even in patients with complete paralysis, there are still nerves that are capable of being stimulated and put to work. Both the noninvasive technique and the drug act on those nerves in the spinal cord, activating them and allowing them to connect with the brain. Then the patient is able to voluntarily put those nerves to use.

On their own, these nerves are not able to reach their motor thresholds, which would allow them to connect to the brain, said V. Reggie Edgerton, the senior author of the study and a physiologist at UCLA. But with help from both the drug and the nerve stimulation, their motor thresholds are raised to the point where the nerves can be put to work and cause the muscles to move.

“This changes the property of the spinal cord so that the person can decide when to move,” he said. “With this stimulation and a little bit of training, dormant cells can regain their function.” Edgerton said these techniques are like putting a hearing aid on the spinal cord. It allows the rehabilitation to more easily engage the nerves and train them.

Like training wheels on a bike, the suit adjusts its hold, allowing the patient to get used to supporting his or her own legs

Whether or not patients with complete paralysis will ever be able to fully regain their ability to walk is still unknown. However, Edgerton is happy with this initial success as even this amount of stimulation allowed Mr. Pollock’s heart rate to go up. Further, as the patients underwent these therapies (in both the July study and this new one), they saw improved autonomic function, including increased blood pressure, heart rate, and bladder function–all things that could improve the quality of life for paraplegics, Edgerton said.

While extremely optimistic, Edgerton said this research was simply a proof of concept and more testing will give the researchers vital information about how much movement people with complete paralysis can recover. “We see where we are right now as the baseline,” Edgerton said. The study has yet to be tested in those with only partial paralysis and Edgerton and his team believe that those patients could possibly benefit even more as more of their nerves are functioning.

Edgerton said that it will likely be many years before these new approaches are available to everyone, but he believes this treatment, regardless of whether it can help those who are paralyzed walk completely on their own, could potentially improve the quality of life for those with both partial and complete paralysis.