These infrared images show some mammals keep their noses cool, while others maintain a warm snout. 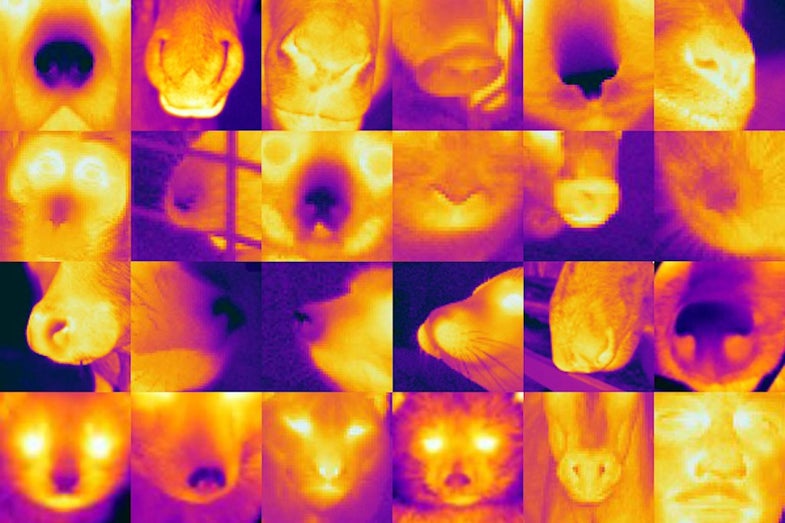 This collection of cute schnozzes illustrates an interesting fact: Some mammals have warm noses, while others maintain cooler ones. Can you guess which of the above noses belongs to which animal? The answers are at the bottom of this post. The images were made with an infrared camera, and the darkest parts represent 68 degrees Fahrenheit (20 degrees Celsius), while the lightest parts are a little more than 100 degrees Fahrenheit.

The pictures come from scientists at Lund University in Sweden, who recently began studying a specialized mammalian nose structure called the rhinarium. “We want to know what mammals can do with specialized nose tips,” Lund zoologist Ronald Kröger tells Popular Science. Many mammals—including cows, deer and dogs, but not humans—have rhinaria, which, unlike human noses, are wet and hairless. The interiors of rhinaria also probably differ from human noses in their nerve connections, Kröger says. With respect to temperature, he and his colleagues are examining how keeping rhinaria cool helps animals.

The newly established nose research group hasn’t published any scientific papers yet. The group is currently writing papers based on research performed over the last year, Kröger says.

Previously, he researched animal vision, but got curious about rhinaria when his dog touched him with its cold nose, which made him wonder about its unusual temperature. “I thought, this is so interesting, we have to know more,” he says.

The animals above are:

Bonus: Check out this time series of a dog’s nose as it falls asleep (top row) and awakens (bottom row). Dogs keep their noses wet and a few degrees cooler than body temperature while they’re awake. When they rest, however, the nose becomes drier and warmer.