A construction project led to a remarkable sauropod discovery. 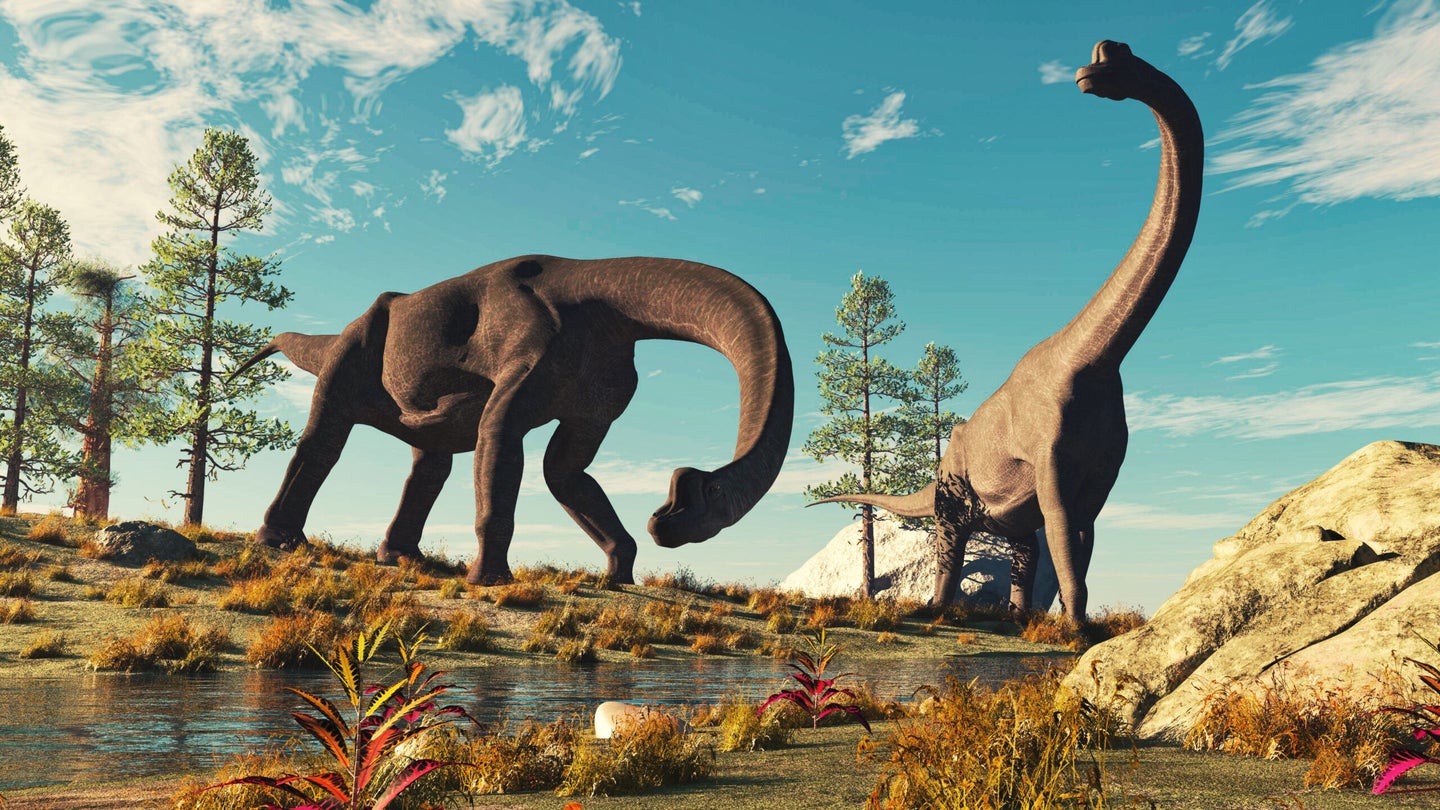 A 3D rendering of two brachiosaurus (a genus of sauropod) near a stream in the nature. Deposit Photos
SHARE

Fulfilling the dreams of child paleontologists everywhere, the skeletal remains of a possible sauropod, the group that includes the iconic brachiosaurus genus, have been found in a backyard. The 82-foot-long skeleton was uncovered in Pombal, a city in central Portugal.

In 2017, the property owner noticed some fragments of fossilized bones during a backyard construction project. The owner contacted a research team who investigated the site and launched an excavation campaign. Between August 1 and 10 of this year, Portuguese and Spanish paleontologists working on the site have unearthed what could be the remains of the largest sauropod dinosaur ever found in Europe.

[Related: This fossilized dinosaur embryo is curled up just like a baby bird.]

“It is not usual to find all the ribs of an animal like this, let alone in this position, maintaining their original anatomical position. This mode of preservation is relatively uncommon in the fossil record of dinosaurs, in particular sauropods, from the Portuguese Upper Jurassic”, said Elisabete Malafaia, Postdoctoral researcher at the Faculty of Sciences of the University of Lisbon (Ciências ULisboa), Portugal, in a press release.

Sauropods were long-necked, long-tailed, herbivorous dinosaurs that stood on four legs (or quadrupedal). The smallest sauropods stood at about 50 feet and the largest (Brachiosaurus) standing at an astounding 98 feet tall and weighed over 170,000 pounds.

Researchers have gathered an important set of axial skeleton parts from the site, including vertebrae and ribs of a possible brachiosaurid sauropod dinosaur. The Brachiosauridae group lived during the Upper Jurassic period to the Lower Cretaceous period, about 160 to 100 million years ago. Brachiosauridaes are characterized by their very developed forelimbs. Some of the most notable species in this group of sauropods, are  Brachiosaurus altithorax, Giraffatitan brancai, and Lusotitan atalaiensis (found in western Portugal). A leaf-munching, herd-moving brachiosaurus was also the first dinosaur spotted by famed fictional paleontologist Alan Grant, tenacious fictional paleobotanist Ellie Sattler, and witty fictional chaotician Ian Malcolm in 1993’s Jurassic Park.

[Related: The largest dinosaurs got huge way earlier than we thought.]

The team is now testing a hypothesis that there are more parts of the skeleton that could be uncovered at other deposit sites.

“The research in the Monte Agudo paleontological locality confirms that the region of Pombal has an important fossil record of Late Jurassic vertebrates, which in the last decades has provided the discovery of abundant materials very significant for the knowledge of the continental faunas that inhabited the Iberian Peninsula at about 145 million years ago”, adds Malafaia.