Sometimes art imitates reality. Sometimes reality imitates art. And sometimes you can’t tell what came first. This month, Square Enix, the video game company famous for producing games like Final Fantasy and Dragon Quest, hosted a conference on the future of human augmentation. To my knowledge, it’s the first example of a video game maker setting out to organize a bioethics conference around the subject of a game.

The term human augmentation is a catchall for body enhancements. Whether people are using prosthetics, inserting electronics into their bodies, or taking pills to live longer, they’re augmenting themselves. The impetus for the conference called Human by Design is the release of the latest installment in the franchise Deus Ex: Mankind Divided, which comes out on Tuesday. The gritty cyberpunk role-playing game takes place in a future where people are segregated because of their augmentations. Its metal-armed protagonist Adam Jensen lives in a world of “mechanical apartheid.”

The developers organized the conference to contextualize the themes of the game while simultaneously introducing gaming audiences to the debates revolving around emerging biotechnology. Part of the point of the science fiction genre is to speculate on how new technologies change the human experience. We should all be speculating more and debating about what’s technologically feasible and how those possibilities might impact our society.

That said, mixing fact with fantasy without clearly demarcating the lines can turn off, or worse, mislead an audience. Sometimes the panels felt like a prelude to a video game, and while I sat in the dark theater sometimes I felt as though I was living in one.

Only in a video game could Zoltan Istvan, a transhumanist presidential candidate, go on stage to advocate human photosynthesis. “I have friends who want to use the new genome editing CRISPR technology to grow a third eye in the back of their head,” said Istvan. “They’re also trying to splice plant DNA into their arms so that they could go out into the sun and photosynthesize.”

There are plenty of real and interesting debates taking place about what’s happening now in technology such as how to provide access to better prosthetics and other forms of healthcare to the broader public.

The high points of Human by Design came when Steven Sanchez, who suffered a spinal cord injury, and Cathrine Disney, who was born with a congenital amputation, spoke about how their prosthetics changed their daily lives. Disney described her experience with prosthetic arms as a child. “They’re not only offensively ugly in their attempts to mimic human hands, they’re heavy, clunky, and ultimately useless,” she said. 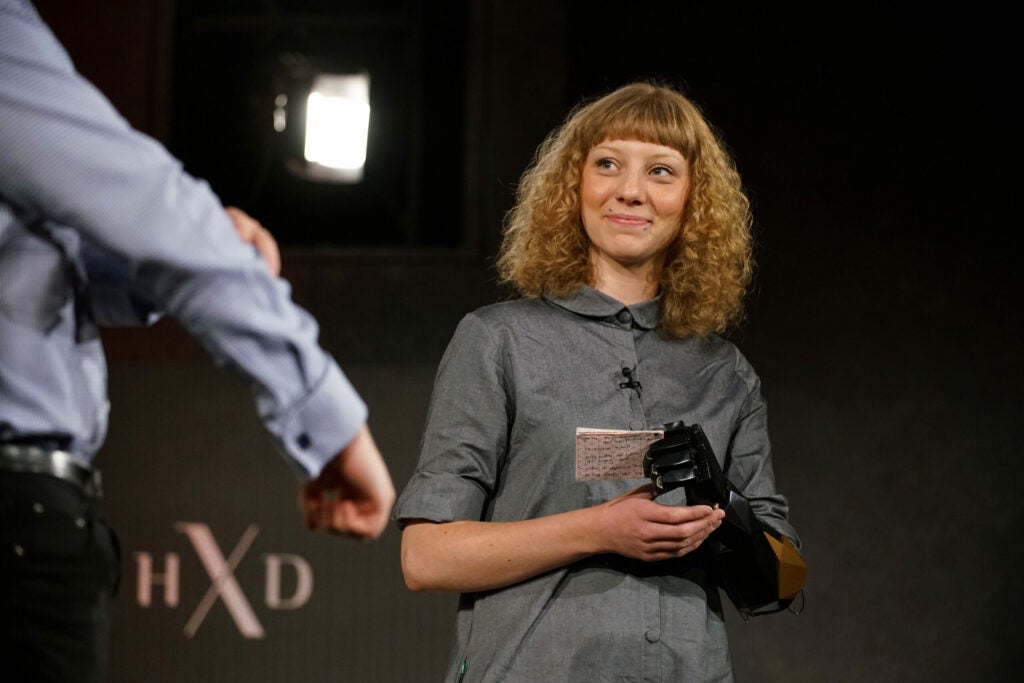 Cathrine Disney speaks about her prosthesis designed with Open Bionics at the Human by Design conference.

Sanchez and Disney eloquently described how mechanized prosthetics changed theirs. Disney designed herself a new robotic arm with Open Bionics and Deus Ex. “Instead of being the elephant in the room, all eyes are on us for the right reasons,” she said, describing how the new arm affected her self-esteem.

Several of the panelists released of a set of ethical principles regarding the future of human augmentation. Have a look.