Most dinosaurs were landlubbers, but this Cretaceous predator may have been found splashing in shallow waters for a meal. 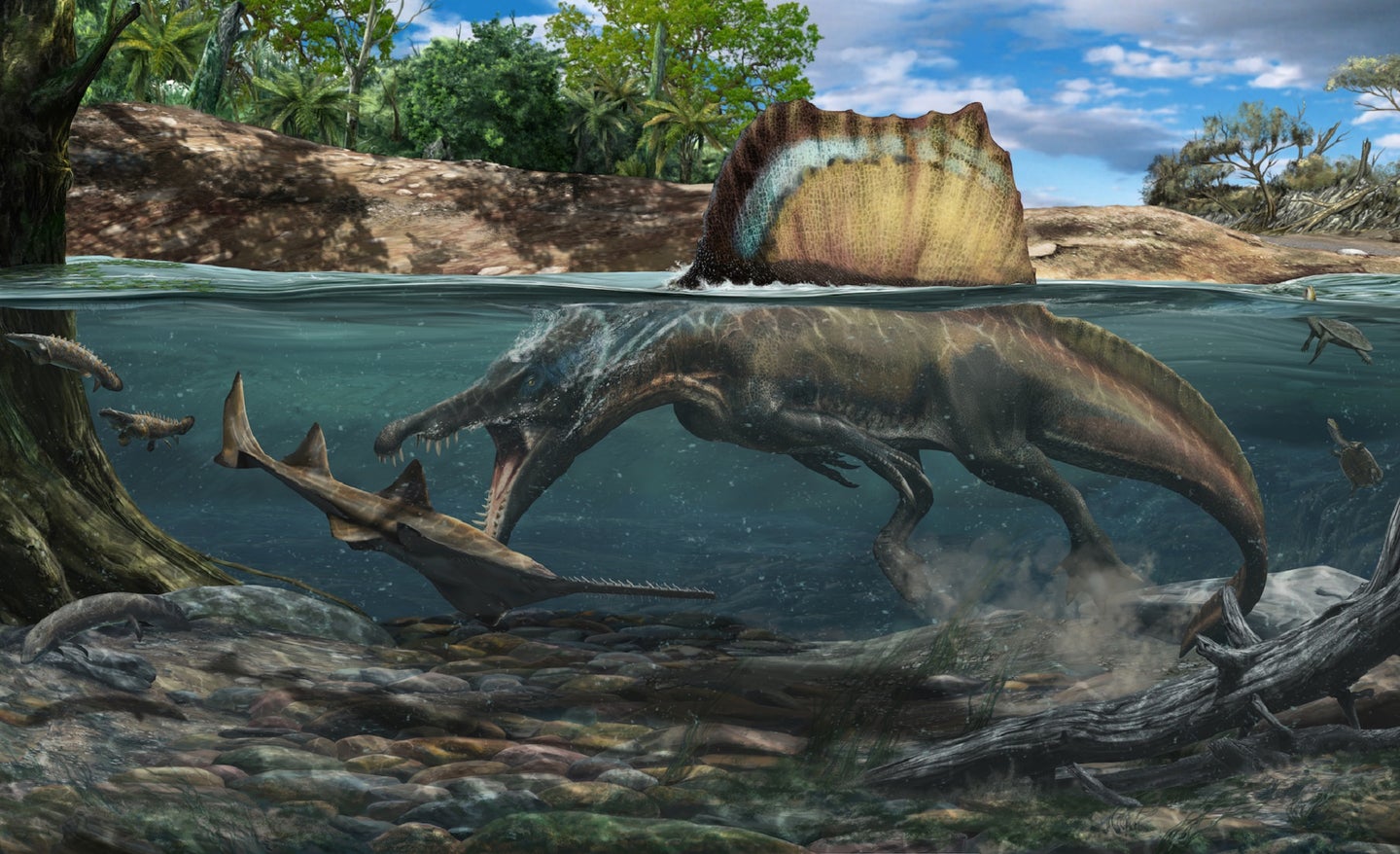 These spiny backed Cretaceous beasts may have been quite decent swimmers. Davide Bonadonna
SHARE

More than 90 million years ago, a dinosaur similar in size to T. rex cruised through shallow waters in search of prey, scientists reported today in the journal Nature.

A number of ancient reptiles such as plesiosaurs and ichthyosaurs are known to have had marine lifestyles, but dinosaurs have generally been considered landlubbers. However, an analysis of the density of 380 bones belonging to a variety of dinosaurs, other extinct creatures, and present-day animals suggests that the iconic Cretaceous dinosaur Spinosaurus and one of its close relatives were capable swimmers.

Based on the new findings and other reports, it’s “strongly plausible” that Spinosaurus was an aquatic dinosaur, says Alexandra Houssaye, a paleontologist at the French National Natural History Museum in Paris who wasn’t involved in the research.

While Spinosaurus probably didn’t have the agility or diving abilities seen in today’s seals or dolphins, its bones suggest the enormous predator was more comfortable in water than on land and may have swam along the riverbed like a misshapen hippopotamus or crocodile, Houssaye says.

[Related: Most dinosaurs didn’t swim—but this ‘dino equivalent of Jaws’ sure did]

Spinosaurus belongs to a family of meat-eating dinosaurs known as spinosaurids that emerged during the Jurassic Period. They had narrow, crocodile-like faces and long spines along their backs that could grow to around 6 feet tall, says Matteo Fabbri, a paleontologist at the Field Museum of Natural History in Chicago and coauthor of the study. Although Spinosaurus wasn’t quite as heavy as T. rex, it was longer, with some specimens reaching an estimated 50 feet.

The first Spinosaurus fossil was discovered in Egypt in the early 20th Century but was destroyed during World War II. During the 1980s and 1990s, researchers began to find fragmented fossils from Spinosaurus and its family members around the globe and surmised that spinosaurids were mostly land dwellers that sometimes waded through the water in search of fish, similar to present-day herons.

Then in 2014, a Spinosaurus skeleton in unusually good condition was identified in Morocco. “It’s created a huge debate in the field of paleontology,” Fabbri says. He and his collaborators noted a number of traits, including stubby hindlimbs and paddle-like feet, that hinted that the dinosaur was at least partly aquatic. In 2020, the team reported that Spinosaurus’s tail had an unusual fin-like shape that could have propelled it through the water similarly to the tails of modern crocodiles.

Still, Fabbri says, it can be difficult to judge how much time an animal spent underwater by the shape of its bones. Today’s whales and seals have plenty of skeletal characteristics that reveal their aquatic tendencies. But in other water-loving species, such as hippos and tapirs, these features aren’t as obvious.

Even though they have a well-documented aquatic lifestyle, “if you look at skeletons of hippos they look much more like terrestrial animals than anything else,” Fabbri says. “So is it possible that maybe we’re underestimating the ecological diversity of the fossil record because we are only focusing on anatomy?”

To address this question, he and his colleagues measured the bone density of Spinosaurus and two other spinosaurids, Baryonyx and Suchomimus, and compared them to other dinosaurs and extinct reptiles, Cretaceous birds, as well as a wide array of modern birds, mammals, and reptiles. The researchers examined the thighbones and ribs of their specimens using CT scanning and by examining thin slices of bone under the microscope.

“Higher density means there’s more tissue per single volumetric unit,” Fabbri says. “If you are an aquatic animal…if you are denser you can sink easily, and therefore you have more buoyancy control.”

Animals that submerge themselves underwater, such as hippos, manatees, crocodilians, and penguins, have denser bones than terrestrial animals and aquatic animals that dive deeply to search for food, including ichthyosaurs and modern whales and seals. These more active swimmers rely on their own movements, rather than bulky bones, to control their buoyancy, Houssaye says. When land-dwelling animals such as the ancestors of today’s whales take to the water, dense bones evolve early in the transition. “​​The inner structure changes more quickly than the shape of the bones,” she says.

Fabbri and his team observed that generally an animal’s bone density was mostly unrelated to its body size. They also noted that flying animals were somewhat more likely to have lightweight bones, and the densest bones were found among aquatic animals. In shallow-water specialists, he says, “You don’t have this donut-shaped cross section where you have bone outside and emptiness in the middle; you simply have a lot of bone that reaches to the center.”

The researchers found that both Spinosaurus and Baryonyx had extremely dense bones, similar to penguins, cormorants, and plesiosaurs. They may have returned to land to lay their eggs, Fabbri says, but probably spent most of their time in the water.

[Related: These ancient, swimming reptiles may have been the biggest animals of all time]

On the other hand, Suchomimus had bones more similar to the other dinosaurs included in the analysis, suggesting it didn’t hunt underwater like its cousins. However, Suchomimus’s elongated snout and cone-shaped teeth suggest that it did feed on fish, and may have waded along riverbanks.

Most dinosaurs probably weren’t built for living in the water, Fabbri says. Nonetheless, there may be other extinct animals who were better suited for swimming than scientists have previously assumed based on the shape of their bones. The next step, he says, is to measure the bone density of a broader array of dinosaur fossils.

“The fossil record is pretty patchy, meaning that a majority of skeletons are very fragmentary,” Fabbri says. “So this was very exciting because it was a way to say, okay not only can we understand the ecological adaptations in the fossil record, but you don’t need a full skeleton to understand it.”

One limitation of the analysis is that very compact ribs are sometimes seen in land animals, Houssaye notes, so these bones aren’t necessarily indicative of an aquatic lifestyle. Still, the densely-packed thighbones Fabbri and his colleagues observed in Spinosaurus do suggest that these dinosaurs were water dwellers. In the future, she says, researchers may find more evidence for Spinosaurus’s aquatic nature by examining the density of additional bones such as the forelimbs and investigating whether density is consistent throughout the length of the bones.

“Because there are not many bones, we need to exploit them as much as possible,” she says.