Miniature Aroma Sensors Put A Nose In Your Pocket 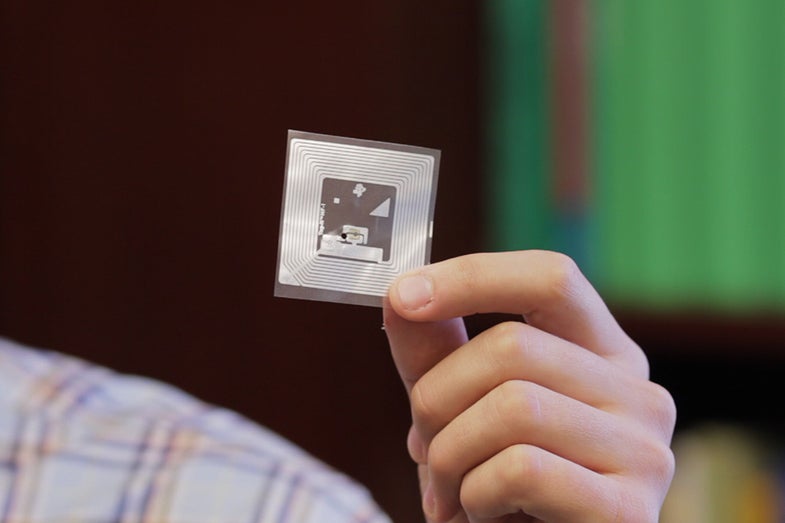 One of the sensors designed by Timothy Swager's group at MIT. MIT/Melanie Gonick
SHARE

When you crack open a week-old box of Chinese takeout, you stick your nose in it. When you flip the tab on a brew that’s been sitting in the sun for a few days, you stick your nose in it. We use our noses to tell whether food is fresh or stale, and whether we think it’s safe to eat or not. But your nose probably can’t pick out a single disease-causing microbe or staleness-signaling chemical that appears in aged food.

Laser-printer sized machines with long names like “gas chromatographs” and “mass spectrometers” can identify food-spoiling agents, but cost thousands of dollars. For those of us who don’t work in a laboratory, researchers and entrepreneurs are experimenting with accessories that integrate freshness sensors with refrigerators, coffee grinders, and smart phones. They’re so-called electronic noses for your food. 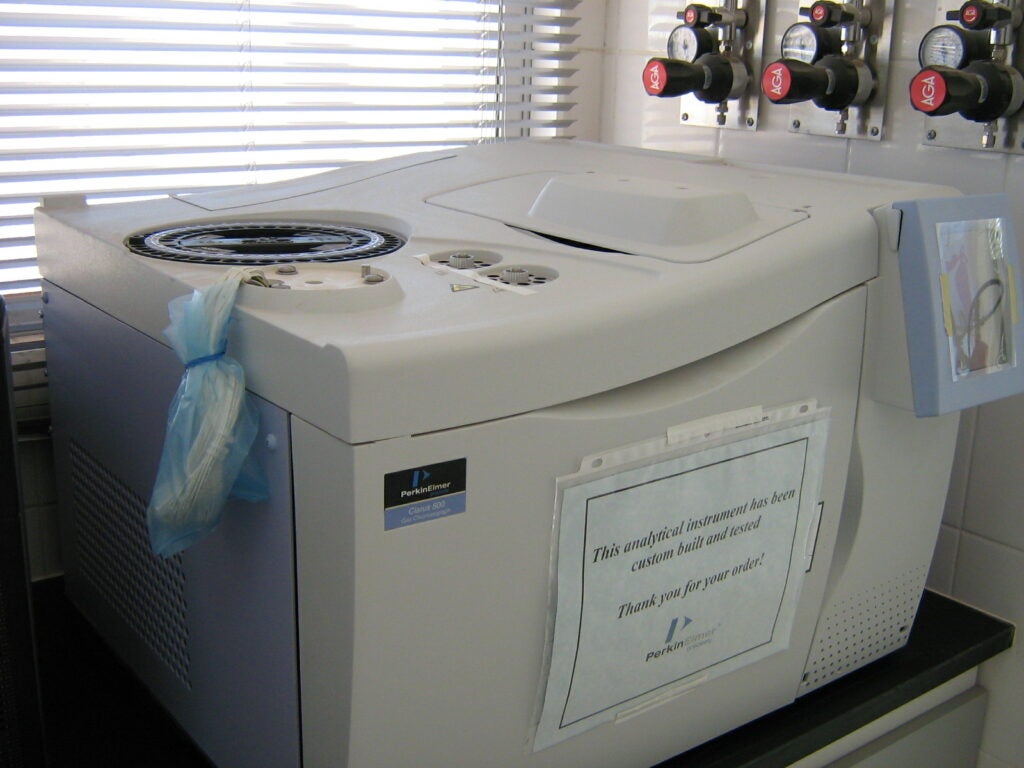 Instruments such as these are commonly used to tell what chemicals are present in different substances.

Electronic noses have been around since the 1980s, but researchers have only recently started adding mobile components to target consumers. Some experts are skeptical that these systems are necessary or even work better than a human palate, but we may soon see electronic noses sniffing the everyday things we eat and drink. 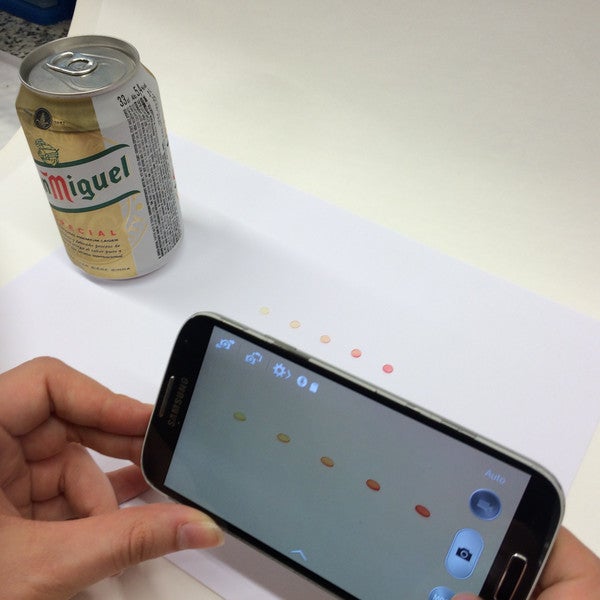 Researchers developed an app that can read the color of a chemical detector looking for furfural, a stale-tasting chemical.

For Spanish brewing company Mahou San Miguel, beer seemed like a natural fit for a freshness-detecting system. The company worked with scientists from Complutense University of Madrid (UCM) on a chemical system and Android app that could detect when pale lager beers go stale.

“I’m not an expert beer taster but I would say the flavor is a little more sweet, but not in a good way,” said María Cruz Moreno-Bondi, an analytical chemist at UCM. “When you smell it, you don’t like it.”

Their system focuses on a single chemical called furfural. Furfural accumulates in beer over time, and could possibly signal that the brew has gone stale. The team created colored disks with a furfural-detecting chemical dye–when they put beer diluted with water, ethanol and hydrochloric acid on the disk, the chemical dye changes color. The accompanying mobile app reads a photo of the color-changed dye and converts the color into the amount of furfural in the beer.

The system might not be scalable to all beers, nor work better than a human, says Matt Simpson, Beer Industry Consultant and founder of The Beer Sommelier LLC. “There’s only one way [to detect freshness], as a trained beer judge,” he said, “which is through olfactory sense,” meaning your sense of smell, and taste. “You figure out what the various flaws are in a beer and pick them out through aroma and flavor. To try and segregate just one or two compounds you’re doing a disservice to whatever beer you’re analyzing.”

When beer gets old, some of its chemicals change in the presence of oxygen. The new chemicals could spoil the flavor or introduce new ones. Some beers actually taste better after some oxidation, however, like the sherry-noted barleywines, chocolatey imperial stouts or fruity belgian strong ales, says Simpson. He pointed out that light beers spoil more quickly and have a shorter shelf life, but he didn’t know whether an app would be useful for big brewers who typically hire quality control tasters. “They’ve already got mechanisms in place to detect stale beer,” he said. “I don’t know why they’d need an app for it, maybe to make these guys’ jobs easier.”

But could a mobile app combined with a non-expert palette help smaller brewers or bartenders who don’t have access to a quality control staff? Who knows. While the project received a lot of interest, says researcher Elena Benito Peña, it’s currently on hold.

Others are trying their hand at mobile-integrated freshness-detection in coffee. The Voltaire is a portable coffee grinder that will use detectors to sniff a selection of compounds that comes off of coffee beans as they age in order to read the coffee’s freshness.

There’s a lot of important chemistry that goes into tasting coffee. “It harkens back to the moment I’m at a coffee shop and spend 16 bucks on a pound of beans,” says Samantha Rose, CEO of GIR, or Get It Right, the company that created the Voltaire. “If they taste great, I use them again. But if they taste different, is it because they’re bad or is it a flavor I should be appreciating? If they’re really bad, should I be ordering in a different quantity, or is this roaster sending beans less fresh than normal?”

Lots of people in the specialty coffee community think there’s a specific time where a cup of coffee will taste best, beginning somewhere between 12 and 24 hours after roasting according to Bill Ristenpart, a chemical engineer at UC Davis who teaches a course called The Design of Coffee: An Engineering Approach.

Coffee beans continue letting off carbon dioxide and other gasses for a few days after roasting. The Voltaire grinder creates graphs of the amount of gas, which you can read on a mobile app. Through machine learning, the sensors might be able to collect carbon dioxide curves from each specific bean to learn when they’ve gone stale, and one day automatically order new beans or suggest a different amount of beans if there were lots of beans left, according to Scott Heimendinger, technical director of Modernist Cuisine, who engineered the detectors.

Ristenpart cautions that there is remarkably little in the way of peer-reviewed science in the coffee industry, something he and his group at UC Davis is trying to fix. “In terms of hard data there isn’t much in the way of how coffee tastes versus time,” he says. Dan Cox, president of Coffee Analysts, agrees. “We wish there was a way to visually tell whether coffee was fresh or not.” He applauded the effort and thought the Voltaire was an interesting idea, but would want to see the results of a taste test with a panel of experts to confirm that the freshness detecting method works.

Rose is working on mollifying those concerns with tasting panels. “We have more data gathering to do before we have something that’s conclusive, but our strategy with the whole thing is to keep it very transparent,” she says. She hopes to make all of the Voltaire data as public as legally possible. After all, the product is intended for the coffee community as a whole, she says. 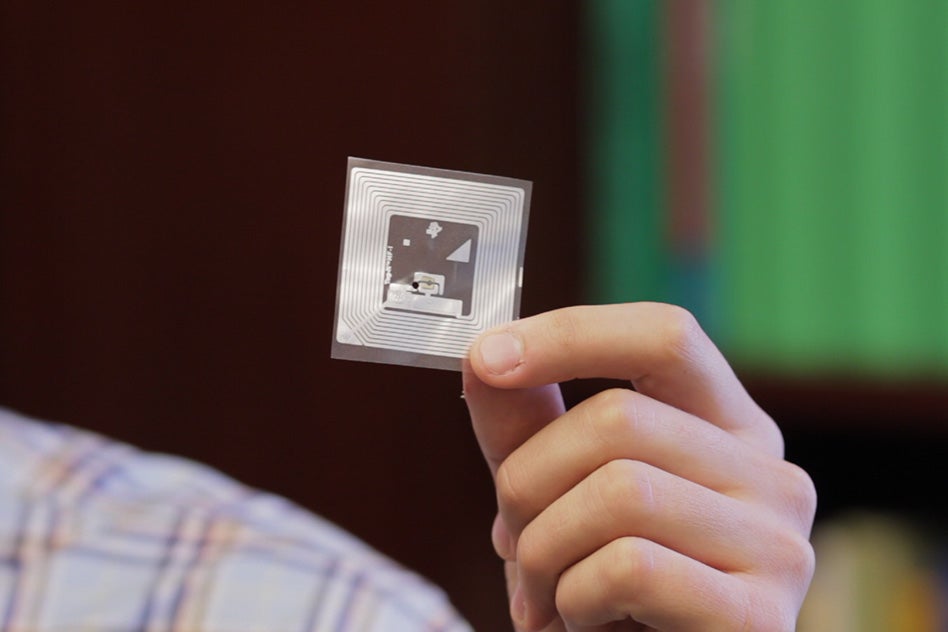 Freshness isn’t just about taste, though. Microbes can grow in foods, and chemicals interacting over time can leaving behind products that could be bad for your health. Plus, a lot of expiration dates are unreliable.

Tim Swager runs a lab at the Massachusetts Institute of Technology, and dreams of a “smart refrigerator that knows everything that’s in it.” If food producers put small radio frequency identifying (RFID) sensors on packages, the gas information combined with the day the food entered a fridge could create a dynamic expiration date. “Something can go bad quickly if it was left warm when it’s not supposed to be,” said Swager. “Dynamic expiration dates are really important because it would reduce the amount of waste.”

Plus, with added mobile integration, your phone could notify you that hey, maybe you shouldn’t eat those three-week-old leftovers.

The technology Swager describes exists; his lab creates thin, small sensors (like the metal security stickers you find at the department store) that can detect the chemicals that come off of spoiled meat or rotting fruits. The sensors contain a circuit with carbon nanotubes that are engineered to wait until a molecule of the offending gas passes through. That changes how electricity passes through the sensor, and a smartphone can detect the change.

Swager cautioned that there could be some privacy concerns, since an advertiser would love to know everything someone had in their fridge.

There are plenty of other new applications for electronic noses; but keep your nose open. As researchers add mobile convenience to these products, one day, yours might not be the only nose sniffing your food.