Inside a suit that makes you feel 85 years old 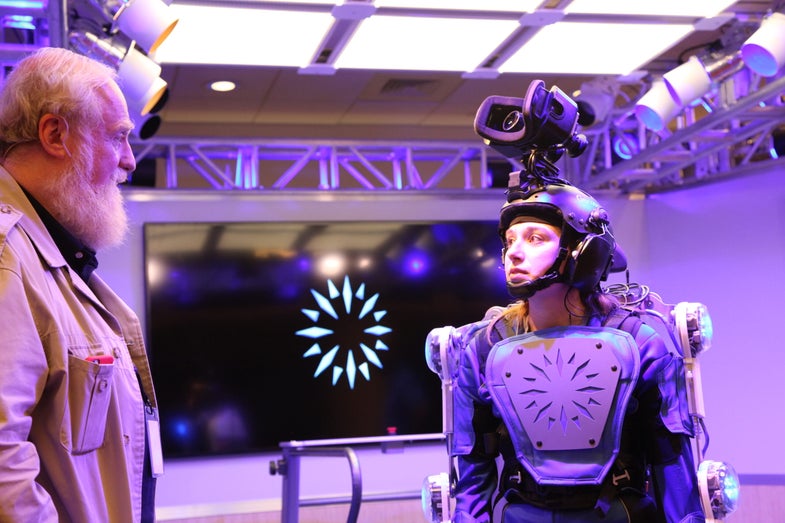 Panting and sweating with a heart rate of 125 beats per minute and rising, I look up at Bran Ferren, whose futuristic aging suit I’m currently outfitting. “How far do you think you went?” he asks. “Pretty far,” I say feeling exhausted but proud and at the same time struggling to keep myself from falling too far back on the moving treadmill. “If you keep going for another minute or two, you will have made it a half of a city block. Let’s add in a hip replacement.” Oh, great.

The R70i Aging Suit, which I’m wearing, is part of an exhibition at the Liberty Science Center in Jersey City, New Jersey, which opened Friday and runs through the 10th of this month. Run by Genworth Financial, a company that focuses on long-term care insurance, in partnership with Applied Minds, the exhibit’s goal is to get younger generations to understand what it really feels like, physically, to age. And in doing so, perhaps become more empathetic to aging parents, grandparents, and other older individuals in their lives.

But how successfully can a suit simulate aging?

Pretty well, actually. The suit itself weighs about 40 pounds and it took a good 10 minutes for me, with two people helping, to actually get strapped inside of it. Already, before any further experiments went on, I felt some effects. The suit makes your arms and legs feel heavy and stiff, and the augmented reality headset with a pair of high definition cameras attached to it that act as my “eyes” made my vision blurry. I still have yet to need glasses so this was quite striking for me. But this was only the start of it.

The point of the experience is to have both the person inside the suit and the audience understand what it’s like to get older. Every malady, whether it’s a visual or hearing disturbance, is seen or heard by the audience through screens and speakers, or simply through the physical reaction of the person wearing the suit.

As I stood at the first station, my already blurry vision became significantly worse and then distorted around the edges. This quickly turned into tunnel vision and soon all I could see was whatever was directly in front of me. I was experiencing the effects of glaucoma, Ferren, the co-founder of Applied Minds and the mastermind behind the suit, told me. After that, floaters and flashes of light zoomed in front of my eyes, I saw fringes of color around the edges of the treadmill in front of me (cataracts) and gradually I lost my vision all together. “This is age-related macular degeneration,” Ferren explained. Ferren flipped a switch and I was relieved to have my normal blurry vision back. 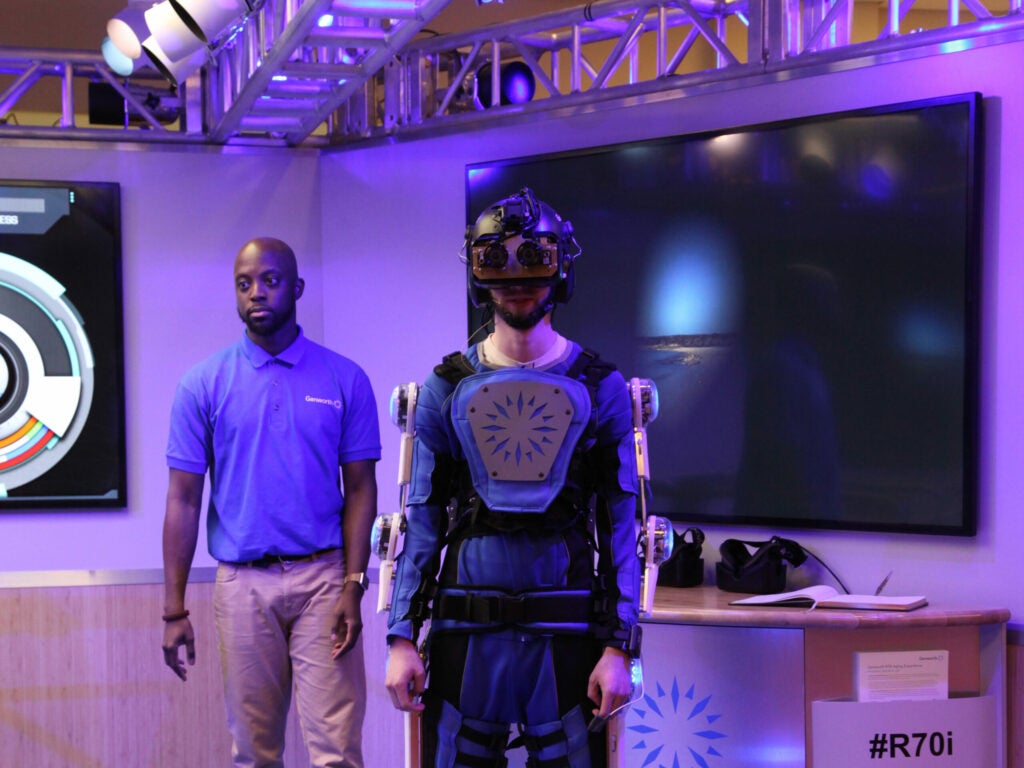 Part of the idea behind this experience, says Ferren, who used to do creative design for Walt Disney Company, is that some of these conditions are somewhat preventable. Diligently wearing sunglasses every time you go out in the sun can help prevent some of these eye related conditions. But just like other preventative measures like eating healthy and exercising to prevent diabetes and heart disease, it’s hard to force yourself to prevent something that you’ve never experienced.

After my vision loss, came my hearing. In addition to the headset, I was also wearing a set of headphones that were attached to the computer strapped to my back. Loss of hearing is also common as we age, and that can be worsened if we listen to very loud music, go to too many concerts without ear protection, or play loud instruments.

I listened as noises became more muffled and background noise, meant to be the chatter of people at a restaurant or on a busy street, became so loud that it was extremely difficult to focus on what anyone was saying to me. I also had trouble hearing because the ringing in my ears, tinnitus, kept getting louder and louder. 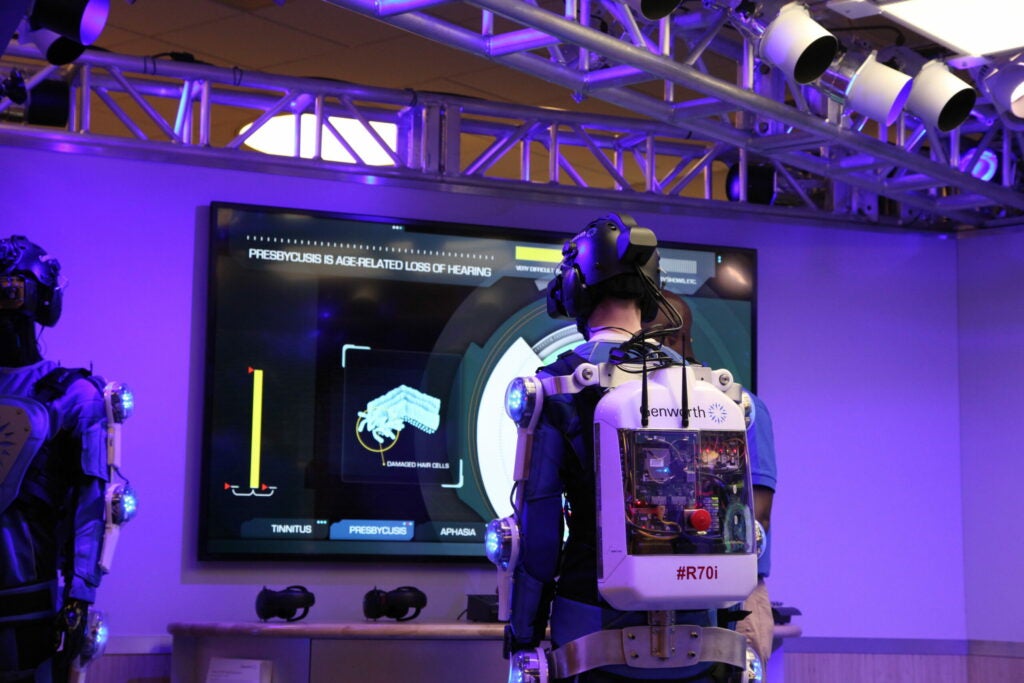 The aging suit has microphones and noise-cancelling headphones that are hooked up to a computer. Together, they create an immersive understanding of the hearing impairments that accompany aging.

Finally, I experienced aphasia. As I tried to answer a simple question of why I decided to become a journalist, the words I was trying to say came out but at such a delay that it threw me off completely. This was achieved by having whatever I said played back into my headphones at a slight delay. As the presenters will note, this isn’t how aphasia works exactly, however the effect it has is similar to the frustrations that a person with aphasia might have.

Then it was on to the treadmill, where walking a few steps feels like the last leg of a marathon that you want to finish so badly but you simply cannot. I had lost muscle strength, Ferren reminded me. As if that wasn’t grueling enough, he let one of my legs stay at its normal, exhausting stride and the other one he knocked out to the extreme—mimicking how he felt just prior to having his hip replaced.

As a lifelong athlete and runner myself, this treadmill exercise hit me hard. Is this really what it’s going to feel like when the daily wear and tear of my muscles and joints accumulates?

When I finally lifted my headset and stepped out of my suit, I was amazed at how immersed I really was in the experience and how much I had adjusted to my new body in just that short amount of time–and yes, I was quite relieved to be young again.

What effect can wearing this suit have?

One of the points that Ferren brought up is that as we continue to live longer, our loved ones will be faced with the task of taking care of us. No one really wants to get old, and while future technological advances may be able to halt some effects of aging, we are still likely to experience many of these ailments when we reach a certain age. And when it comes down to it, aging is a lot less scary when those who care for you understand your pain. Virtual reality has let us not only peer into an alternative reality that we aren’t likely to experience, but now into a reality that our parents and grandparents are experiencing, and that we, one day, will too.

When I was younger, I remember my grandmother used to drive with my family all the way to the place where we were going to hike, only to find a good bench at the hike’s entrance to sit on. “Enjoy the hike, I’ll be here when you get back,” she’d say. As a kid I found it hard to understand why she didn’t want to come with us. After going a half a city block on the treadmill with the aging suit on, I think I get it.

My best friend’s father has a form of aphasia called progressive nonfluent aphasia or PNA, a less talked about and insidious form of frontotemporal dementia in which the person has trouble producing the words they want to say even though they still fully understand the meaning of those words. Aside from the daily struggles of adjusting to a new lifestyle, I surmise that for her and her family the most frustrating part of dealing with it all is that it’s nearly impossible to understand what that must feel like for him.

Perhaps stepping into the suit will break down some of the barriers that separate our generations and will allow for better understanding and ultimately more compassionate and empathetic care. As Atticus Finch tells Scout in To Kill A Mockingbird, “You never really understand a person until you consider things from his point of view…Until you climb inside of his skin and walk around in it.” With the R70i Aging Suit, you nearly can.