If you want to pick a favorite animal that will surprise even the quirkiest first date, you can’t go wrong... 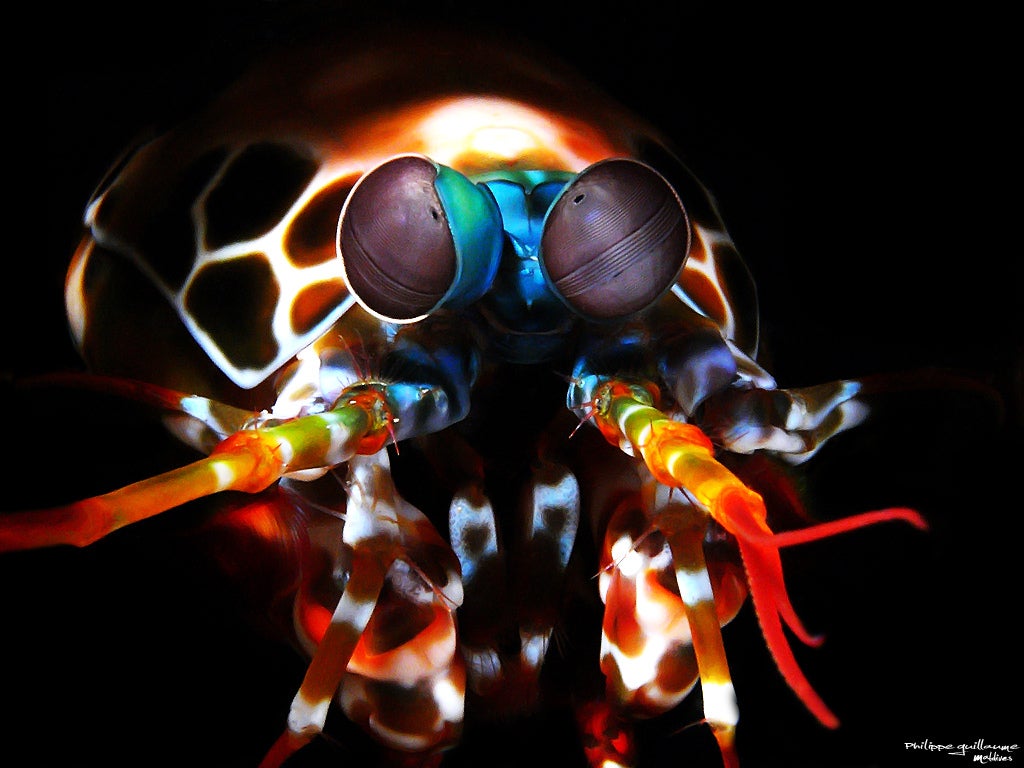 If you want to pick a favorite animal that will surprise even the quirkiest first date, you can’t go wrong with the mantis shrimp. This foot-long, coral reef-dwelling crustacean has a rainbow tail, and punches its prey so hard and so fast that it creates underwater shockwaves.

But for many people, that just isn’t cool enough; instead, they fixate on the mantis shrimp’s vision. Within each large, roving eye, mantis shrimp have twelve types of color-sensitive cells called photoreceptors. That’s four times as many as we humans have, despite our self-assurance that we have the best vision in the animal kingdom.

This seeming contradiction—that a dim-witted, oversized version of the shrimp from last night’s Chinese takeout can see better than we can—has led otherwise smart people into waxing poetic about the world through a shrimp’s eyes. “Where we see a rainbow, the mantis shrimp sees a thermonuclear bomb of light and beauty,” wrote Matthew Inman of The Oatmeal. To Jad Abumrad and Robert Krulwich of Radiolab, the mantis shrimp sees its surroundings in the richest, most harmonious chorus of colors imaginable.

“But it didn’t really make sense,” according to doctoral research student Hanne Thoen at the University of Queensland in Brisbane, Australia, “as you really don’t need that many photoreceptors to see color and discriminate well.”

It’s a lovely thought that a glass-punching, rainbow-colored crustacean could have sensory and aesthetic capabilities beyond our wildest dreams. Yet mathematical models predict that even a so-called “ideal system” for color vision would need no more than seven photoreceptors, tops. Beyond the questionable “need” for twelve photoreceptors, “such a large number of photoreceptors would also require a large amount of processing power” for a shrimp brain to encode color like the rest of the animal kingdom—a brain whose complexity we are only beginning to explore, Thoen said.

To test the romantic theory, Thoen gave mantis shrimp vision tests to see if their extra photoreceptors actually helped them distinguish between extremely similar colors. First, she and her colleagues trained between four and seven individuals of a small species of mantis shrimp (Haptosquilla trispinosa) to recognize ten different colors, such as royal blue, bright green, and true red. These shrimp were then released from their burrows and presented with a choice between two colored lights: the color they knew and another one differing in wavelength by 5 to 100 nanometers. When the colored lights differed by 50 to 100 nanometers—for example, powder blue versus neon green—the mantis shrimp chose the color they had been trained to recognize up to 80 percent of the time. But when the colors differed by less than 25 nanometers—say, powder blue versus light teal—their accuracy dropped to around 50 percent. That’s no better than if they were guessing.

“The fact that they were this bad at discriminating color was quite surprising,” noted Thoen.

We humans, however, are capable of distinguishing between nuances in color as similar as 1 to 4 nanometers—just a hair lighter or darker than powder blue. So how come mantis shrimp eyes, with their twelve photoreceptors, aren’t sensitive enough to detect similarly slight variations in color?

Mantis shrimp must not process color like the rest of us, but instead have a completely different type of color vision, Thoen suggested. She and her team hypothesize that as mantis shrimp scan the sea, their unique eyes take in signals from all twelve photoreceptors at once and, lightning-quick, recognize the telling colors of a competitor or potential meal. This means they still have exceptional color vision. It’s just not exceptional in the way we originally thought.

When I told a friend that mantis shrimp can’t see the extravagantly complex colors we had originally envisioned, she couldn’t hide her disappointment. I can understand why. With their vibrant, tie-dyed appearance and shockingly powerful appendages, these “tiny, colorful badasses” of the sea have serious appeal. Even more so when topped off with a level of color vision we humans would envy. Learning that mantis shrimp color vision isn’t the most incredible ever would be like learning that the blue whale isn’t actually the largest organism on earth—and that it’s just been wearing a fat suit to trick us all this time. We feel a little cheated.

Yet I don’t feel entirely cheated. The role of science—with its incremental process of asking, answering, and asking again—is to show us a more truthful representation of the world. But at any given time, it can’t deliver the full truth: only a snapshot of our current understanding. Sometimes it’s hard for us to let go of our attachment to certain ideas, especially beautiful ones, when we learn something that adjusts the lens and changes our understanding. Yet armed with this new understanding, perhaps we can become more like the mantis shrimp and develop new ways of seeing the world too.