Plan B Must Be Available OTC For Women And Girls Of All Ages, Federal Judge Rules

The Food and Drug Administration ordered to comply within 30 days 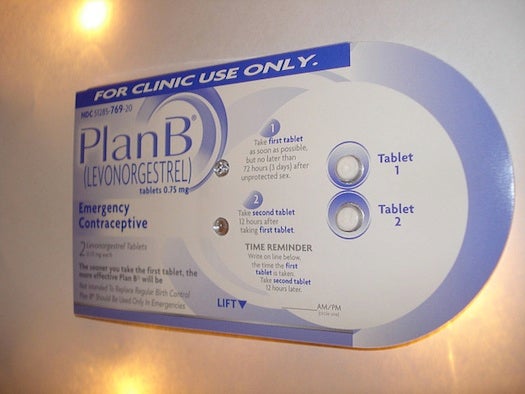 A federal judge ruled today that the U.S. Food and Drug Administration must make emergency contraception—often called the “morning after pill” or by its brand name, “Plan B”—available over-the-counter for girls and women of all ages. The administration must comply within 30 days, Judge Edward R. Korman of the Federal District Court said.

Previously, women over the age of 17 could legally get Plan B and its generic counterparts over-the-counter, but younger girls needed a prescription. The history of getting this approval is a fascinating—and long—case of politics versus science.

The science at stake is actually pretty simple. Biologically, the medication works in the same way, and is safe, for women and girls of all ages. The important questions for younger girls included: Do girls under 17 understand how to use Plan B properly, without the help of a doctor? Do they know that it’s not designed for use as a routine contraception? That it won’t protect them against sexually transmitted diseases?

Major medical groups, including the American Medical Association, the American Congress of Obstericians and Gynecologists, and the American Academy of Pediatrics, have long recommended over-the-counter Plan B access for all ages. In 2011, FDA Commissioner Margaret Hamburg issued a statement saying that FDA scientists found that girls under 17 are able to safely use Plan B without a doctor’s guidance.

Hamburg was overruled, however, by Health and Human Services Secretary Kathleen Sebelius, who said the FDA data didn’t include girls as young as 11, some of whom are able to get pregnant. The overruling was a historic first, the New York Times reported.

In a memo about his decision, Korman wrote that the number of 11-year-olds requesting Plan B will likely be miniscule and that Sebelius’ reasoning was “an excuse to deprive the overwhelming majority of women of their right to obtain contraceptives without unjustified and burdensome restrictions.” The FDA has approved other drugs for over-the-counter sale that are dangerous for kids, he wrote.

This isn’t the first time a federal court has considered this issue. In 2005, Korman oversaw a similar case. At that time, he said the FDA allowed political pressure from the Bush Administration to get in the way of its usual policy. He still left the ultimate decision up to the agency, however. “It was my view that the decision whether to make Plan B available without a prescription regardless of age was one that should be made by the FDA, to which Congress had entrusted the responsibility, and not by a federal district judge,” he wrote in today’s memo.

It appears Korman changed his mind because the FDA was taking too long to do anything. He called the FDA’s actions an “administrative agency filibuster.”

The ruling covers a lot more interesting science. Korman wrote about how plan B works and whether it interferes with the ability of a fertilized embryo to attach the uterine wall and survive after fertilization. (There is no evidence Plan B prevents implantation, but it is also infeasible to conduct the studies that would rule out the possibility.)

He also looked at a study about the effects of making Plan B a prescription medication for some. The study found that the laws made Plan B more difficult to get for everyone, even for women over 17, who were previously legally allowed to buy Plan B over-the-counter. Many pharmacies incorrectly told researchers posing as 17-year-olds that they weren’t allowed to buy Plan B.