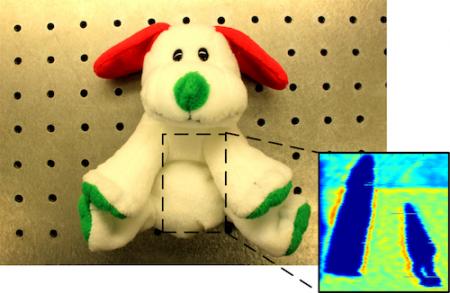 A new silicon microchip can do what no other silicon microchip could before, generating and transmitting radio waves in the terahertz range. The tiny chip operates at 300 times the speed of the CMOS chip in your smartphone, and could someday be used to peer through walls, inside containers and into the food supply.

It can see a knife hidden inside a teddy bear, like the image above. It can even determine the fat content of a piece of chicken, apparently.

Terahertz scanners have long been touted as the future of security–electromagnetic waves in that frequency range can penetrate where other forms of radiation cannot, but they don’t produce the damaging ionizing radiation of X-rays. T-rays can sense every molecule, so they could theoretically detect illicit drugs or explosives, or even hunt for cancer cells. They can see through walls and inside objects, so they would be useful security screeners. The problem has been that the scanners are huge, requiring lasers and many lenses to focus light, not to mention cooling equipment to keep everything at operating temperatures.

For that reason, electrical engineers have been trying to build terahertz scanners using common and cheap manufacturing processes, especially the complementary metal-oxide semiconductors that power most consumer devices. Earlier this year, researchers at the University of Texas at Dallas figured out how to build a special type of high-speed diode in CMOS, producing T-rays on a small scale. Now some researchers at Caltech have done one better, producing the world’s first integrated T-ray arrays.

The mere fact that it operates at terahertz frequencies is a breakthrough. No standard transistors can amplify a radio signal in that range. Silicon chips aren’t designed to operate in it. To get around those limitations, electrical engineering professor Ali Hajimiri and postdoc Kaushik Sengupta combined several transistors on one array, all operating in unison. When operating at the right frequencies, the transistors’ collective power can be combined, boosting the signal’s strength. In a Caltech news release, Hajimiri compared it to an army of ants hefting the same load as one elephant. “Nowadays we can make a very large number of transistors that individually are not very powerful, but when combined and working in unison, can do a lot more,” he said.

What’s more, they figured out how to get the entire chip to operate as an antenna, incorporating several pieces of metal instead of a single wire. (A wire wouldn’t work at terahertz frequencies.) The result is a chip-scale scanner that can produce and distribute T-rays. IBM helped produce the chip, according to Caltech. Hajimiri and Sengupta describe their new chip in the December issue of IEEE Journal of Solid-State Circuits.