Scientists predicted the current measles outbreaks a year ago

It should be no surprise that dense population centers with low vaccination rates would get outbreaks. 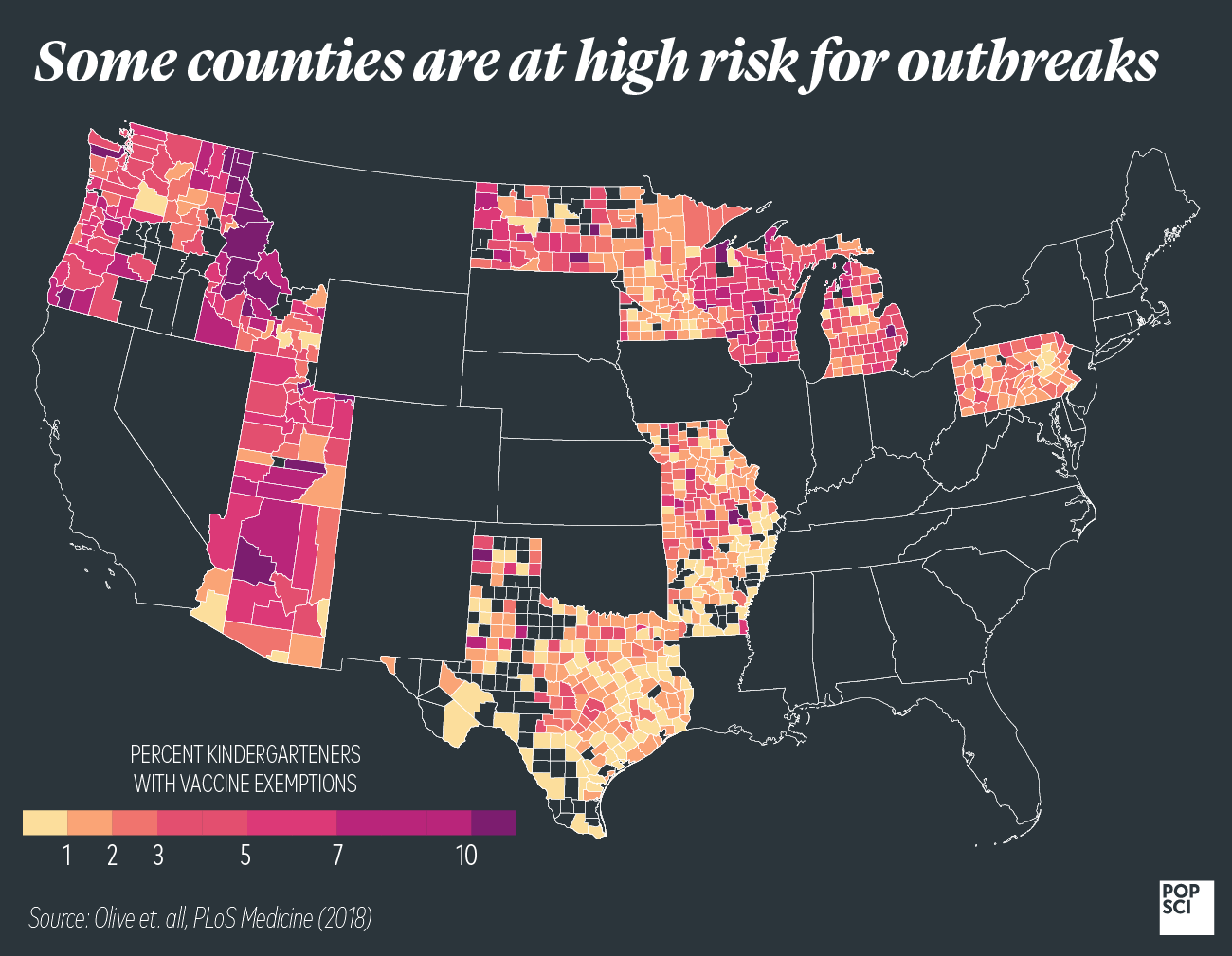 Data from most recent school year available, generally 2016-17 (2015-16 for a small number of counties). Infographic by Sara Chodosh
SHARE

Researchers have been warning us for some time that vaccination rates were dipping dangerously low. Non-medical vaccine exemptions have been rising in most of the 18 states that allow them, and some areas were forming pockets of un-immunized children who would be susceptible to viruses like measles.

One team in particular, at Baylor College of Medicine, went so far as to analyze which counties would be most likely to experience these outbreaks. They published the list, along with other analyses, in PLoS Medicine last June. It contained 14 counties—and so far three of them have had outbreaks. And the current outbreaks not on their list are largely being driven by Orthodox Jewish communities.

If you happen to be familiar with county names (or are just very good at geography), you might notice that these are all counties with cities in them. That’s intentional. “We looked at the data in two ways, first just by percentage of vaccine exemptions, which was the first map,” explains Peter Hotez, Dean of the National School of Tropical Medicine at Baylor and an expert in pediatric vaccinations who co-wrote the study. “But we noticed that was primarily showing rural areas, like Idaho, and we wanted some way to represent urban areas where there were large number of kids at risk.” They originally figured they’d look at roughly the top dozen urban counties, which ended up being those counties that had 400 or more kindergarteners with exemptions.

Though these predictions are less than a year old, we’re already seeing outbreaks in three of them: Portland, OR (Multnomah County); Houston, TX (Harris County); Kansas City (Jackson County). There’s also been a single measles case in King County, which contains Seattle, though so far it seems to be just the one.

It’s far too early to know if 2019 will be a record-breaking year for measles, but even if it isn’t, we’re still seeing a fundamental shift in the kind of outbreaks. Though the recent 130 cases in Rockland County, NY is larger than might have been expected, that outbreak was largely contained within an unvaccinated Orthodox Jewish community, where it’s not uncommon for children to get infected during a trip to Israel and bring the virus back to the U.S. The massive outbreak in 2014, resulting in a whopping 667 cases that year, was also largely the result of the virus spreading amongst unvaccinated Amish folks in Ohio. (There were also an unusual number of cases brought in from the Philippines, which experienced a large outbreak itself.) “I think we’ll always have outbreaks among specific religious groups, but most of those tend to be relatively small” Hotez says. “I think the big change is that now since 2017 we’re seeing outbreaks due to politicized vaccine exemptions due to lobbying efforts by anti-vaccine groups pushing [non-medical exemptions].”

The current outbreaks in Oregon, Washington, and Houston are all attributable to low vaccination rates, Hotez explains, not religious exemptions. “Those are the ones I’m especially worried about, and the ones we can easily prevent with sufficient political will.”

State legislators in Washington are now considering a change to the laws regulating non-medical exemptions. Representative Monica Stonier told Oregon Public Broadcasting that they were looking to tighten up the wording for religious exemptions and completely abolish the personal and philosophical exemptions. Meanwhile, the Oregon State Legislature is considering a bill that would require parents to get a health care practitioner to sign off saying they had reviewed immunization information with the parent. That would be on top of their current measure, which involves parents watching an educational video about vaccines before they’re allowed to request a non-medical exemption.

Departments of health in both states—and really, in all states—are urging anyone who isn’t already vaccinated to go get their MMR shot. The vaccine has saved more than 20 million lives globally—and that’s just since 2000. We can prevent these outbreaks. Go get your shot.