A mysterious polio-like illness in children has the CDC baffled

Sudden muscle weakness and paralysis has been hitting young kids, and experts haven't pinned down a cause. 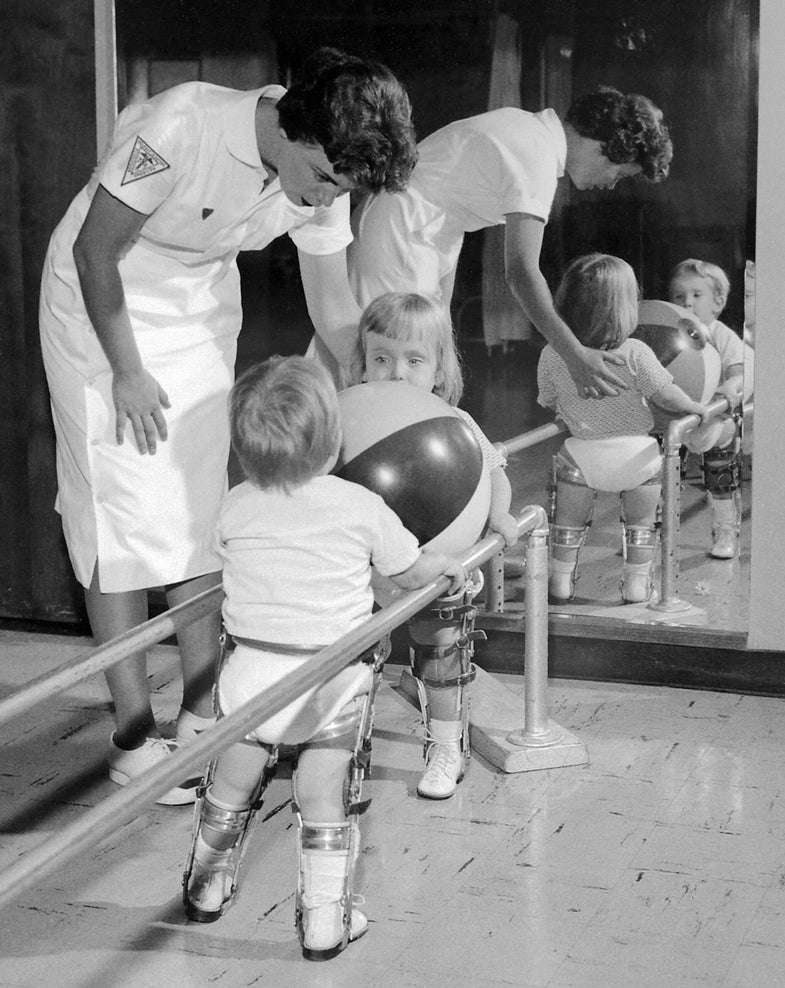 Mysterious illnesses don’t come around that often. Sudden, tiny outbreaks of rare diseases make headlines for their mystique, but they’re not so much unknown as the are unheard of. They’re only mysterious because most of us don’t spend our time browsing catalogues of unusual ailments. But a polio-like illness that’s been afflicting children for the last few years really does have the Centers for Disease Control (CDC) stumped.

Most of the time, the CDC’s job is to monitor already-known diseases. Outbreaks of listeria, prostate cancer deaths, and tuberculosis cases all fall under its purview—and all are fairly straightforward to track. We know what they all look like. This illness is different. Acute flaccid myelitis, or AFM, pops up unexpectedly, mostly in children, and thus far the CDC hasn’t been able to figure out exactly what causes it or even what’s happening inside the body.

The kids develop sudden-onset weakness in their muscles (arms, legs, and facial muscles can all be affected), sometimes escalating to paralysis in the extremities and occasionally affecting the lung muscles enough to make breathing a challenge. These symptoms are strikingly similar to some other viral diseases affecting the nervous system like polio, West Nile virus, and adenoviruses. But since experts haven’t had any luck tracking AFM back to one viral source, they’ve gotten somewhat stuck. And that’s precisely why the CDC is spreading the word: They need more people to be aware so they can collect more information.

“Despite extensive laboratory testing, we have not determined what pathogen or immune response caused the arm or leg weakness and paralysis in most patients,” said Nancy Messonnier, director of CDC’s National Center for Immunization and Respiratory Diseases, in a teleconference for the press. “We don’t know who may be at higher risk for developing AFM or the reasons why they may be at higher risk. We don’t fully understand the long-term consequences of AFM. We know that some patients diagnosed with AFM have recovered quickly and some continue to have paralysis and require ongoing care.” Beyond that, most of what we know is more demographic.

According the CDC, the average age of AFM patients is four, and 90 percent of all cases documented have occurred in children under age 18. We know that so far in 2018 there have been 62 confirmed cases across 22 states. Including those, there have been 386 in total since the CDC started tracking AFM in 2014. We also know the cases peak in late summer and early fall, though with no apparent geographic clusters.

The CDC is currently investigating 127 potential AFM cases, including those 62 confirmed reports, to try to figure out what’s causing this disease. “This is what [the] CDC is here for, to investigate these kinds of clusters of illness,” Messonnier said. That involves collecting stool, blood, and cerebrospinal fluid from suspected AFM patients and analyzing them to work out what they have in common. So far, none have tested positive for polio and though some have come back positive for enteroviruses and rhinoviruses, there’s been no consistent through line to connect the cases.

On top of the viral testing, the CDC is also looking at MRI (magnetic resonance imaging) scans of AFM patients. The disease affects gray matter in the brain and spine, which is part of how doctors are able to diagnose it, and experts are now reviewing scans both of confirmed and unconfirmed cases to see whether they can figure out something about the disease’s mechanism or perhaps identify previously unknown instances of AFM.

This has all been especially frustrating because there’s good reason to think that there is one single causative agent at work here. “If you are having the peaks of disease every late summer and early fall you would think we are finding a single agent,” Messonnier said. “That is what we are not finding. For individual cases we are finding agents, but nothing that provides the unifying diagnosis that we expect to explain this disease.”

To make sure they’re not missing anything, the CDC has also been consulting with outside experts since 2014, when they began collecting AFM case information.

Unfortunately, that’s all we know about this paralyzing disease. Messonnier urged parents to take their kids to a doctor immediately if they have sudden muscle weakness in their arms or legs, as well as to keep them fully vaccinated, wash hands regularly, and to use insect repellent to deter mosquitoes. All these steps help ward off viruses, which are the most likely culprit even if it’s not clear which virus is causing AFM. But Messonnier also warned that even though the CDC is concerned about the apparent rise in cases, that parents should keep in mind how exceedingly rare AFM still is; the chances of a child contracting the disease are less than one in a million. It’s important for everyone to be aware of serious illnesses like this one, but equally important to understand the rarity of contracting them.