Changing Food By Changing Its pH

The power of alkalinity 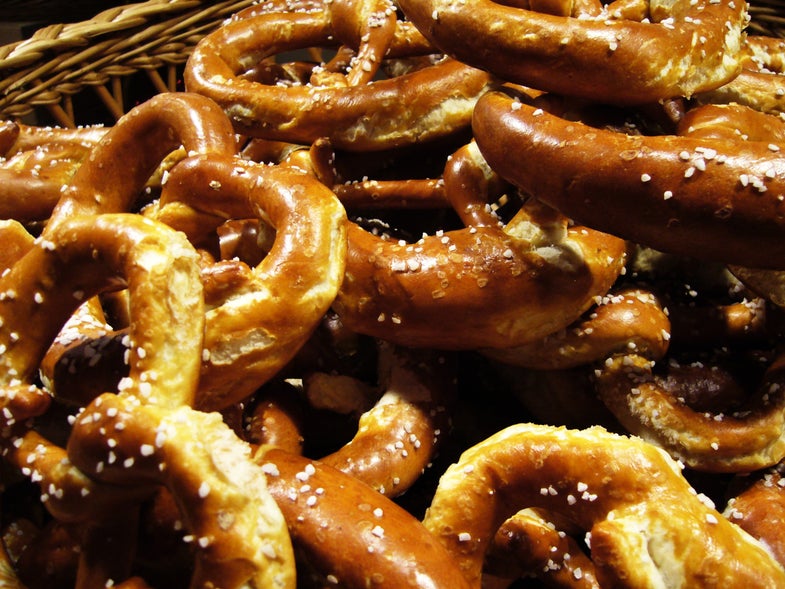 In the kitchen, we’re much more familiar with acids than we are with alkaline ingredients. Acids include vinegar, lemon juice–all kinds of things that we use to brighten foods or add sourness. Acid ingredients are also found in everyday fermented foods, like yogurt. Alkalinity’s a little more unusual.

We generally only encounter it as baking soda, which is something that we use to balance acidity and to generate bubbles when we’re baking, but not something that we add with a free hand to our everyday foods. So let’s start at the beginning. Alkalinity is the opposite of acidity–it has to do with the nature of water. Water can be broken into hydrogen ions (H+) and hydroxide ions (OH-). Acidic ingredients are those that, when mixed with water, leave more hydrogen ions than hydroxide ions in a water solution. Alkaline ingredients are the reverse: they leave you with fewer hydrogen ions and more hydroxide ions. As obtuse as that sounds, it matters because most foods have a lot of water in them–in general, they are mostly water–and the balance between hydrogen ions and hydroxide ions makes a big difference in the way the other components of the food behave. Carbohydrates, proteins, and fats are all very sensitive to their chemical environment.

In Central America, the people who domesticated maize discovered that that grain was more easily hulled and more nutritious when it was precooked in water containing seashells or wood ashes–alkaline materials. So corn was treated with alkaline water very early on in American culture to get the grain out of the seed coat and to make it easier to handle.

One other very good example of the difference between alkalinity and acidity in cooking is in browning reactions. Acidic conditions make browning very difficult. Think about sourdough bread. It’s sour because there’s a lot of acidity. But sourdough breads just don’t brown very well in the oven. So the sour flavor may be wonderful, but it’s really hard to get a nice brown-colored, flavorful crust. Whereas if you use just a little bit of alkalinity to make a soaking fluid for, say, pretzels, you get that amazing brown crust. Pretzels are cooked for a very short time, and it’s normally very difficult to get a lot of browning to take place in a short time. But if you soak or boil the pretzels briefly in alkaline water before baking them, they brown much faster.

Adding alkaline ingredients has a significant effect on the texture, color, and flavor of the noodle.

By changing the chemical environment of the dough, the components in the flour change their behavior, and they change in various desirable ways. The color changes, because pigments in the flour that are ordinarily invisible become visible under alkaline conditions and take on a yellow hue. The interaction of the gluten proteins (which create the solid structure of the noodle) are also changed in such a way that the noodles become firmer. This is not that well understood, but apparently the bonding between gluten molecules becomes stronger under alkaline conditions.

Flavor’s the thing that gives us the most pleasure in food, and it’s also the aspect of food that we know the least about.

And finally, there’s the effect on flavor. The flavor of alkaline noodles is really distinctive, and that’s as big a mystery as anything. Flavor’s the thing that gives us the most pleasure in food, and it’s also the aspect of food that we know the least about. Something happens when you cook alkaline noodles that creates a flavor that’s unique and pleasant. We know the taste of acidity–its sourness, its tartness. Alkalinity is harder to register, but it’s a kind of slick feeling in your mouth. If you take just a bit of baking soda and mix it with water and then put a drop of that on your tongue, you’ll see what I mean. It’s a little bitter, but mostly it’s a soapy kind of feeling. The more alkaline ingredients you include in a dough, the more you end up with that kind of slick, soapy feeling. (Past a certain point, that begins to get sort of unpleasant.) And the aroma gets eggier and eggier, too, which is weird in a noodle recipe that has no eggs whatsoever.

Read how to make your own alkaline noodles here.

This is an excerpt from Harold McGee’s piece “On Alkalinity” from issue 1 of Lucky Peach. The full essay is available on Lucky Peach’s newly minted website, luckypeach.com. If you loved this—or even just strongly liked it—subscribe to the magazine for a full year of essays, art, photography, and recipes that will bring delight to your heart.

Harold McGee writes about the science of food and cooking. He’s the author of On Food & Cooking: The Science & Lore of the Kitchen, Keys to Good Cooking, and posts at curiouscook.com.