5 Educational Programs For Learning By Making

These STEM efforts fuse physics and math with the joy of invention—just add glue. 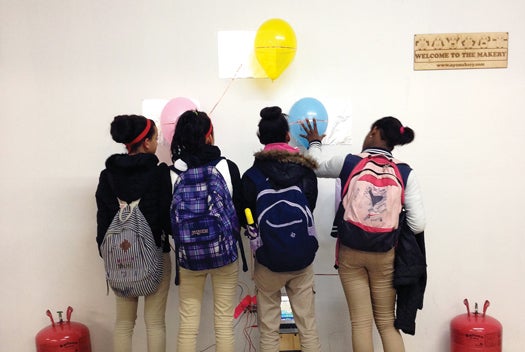 Frustrated with the decline of hands-on learning, Stanford University students created SparkTruck as a roving maker lab. They outfitted a Utilimaster van with tools like a laser cutter and hundreds of dollars worth of Popsicle sticks and miniature motors, then drove it across the country—twice—stopping at schools. It’s reached about 5,000 kids, plus inspired enough like-minded adults that the Stanford team created a “How to Make a SparkTruck” guide.

Cofounder Hsing Wei wants dropping by for an afternoon of creative engineering to be “as normal to people as walking into a store,” and so The Makery temporarily takes over some of New York’s most public spots. It runs pop-up workshops, such as “Create Your Own Simon Says,” in vacant storefronts, abandoned bodegas—even a former freight elevator. This spring, it turned an atrium at Rockefeller University into an air-propelled rocket-launching station.

A virtual summer camp for kids age 13 to 18, Maker Camp presents a different project, based on themes such as paper circuits and DIY fashion, every day for six weeks. Students collaborate online through Google Plus or in person at local affiliates like public libraries. Maker Camp also takes teens on virtual field trips to some of the biggest names in making, including Lego, Disneyland, and Jim Henson’s Creature Shop.

Los Angeles–based Maker Guild started three years ago by awarding digital badges for students who mastered skills like coding and soldering. Now, 17 guilds across eight states reach thousands of participants every year with projects like anti-tickle belts and wood-engraved playing cards. Kids between the ages of four and eight start out as Maker Sprouts, then graduate to Maker Tribes; the organization also runs programs for families, adults, and educators.