The lifecycle of a seasonal delicacy 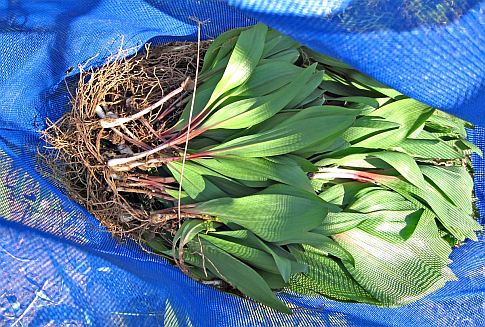 One of the ways that we know for sure that spring has sprung is the appearances of ramps on the trails and at the markets. Ramps, Allium tricoccum, are also known as wild leeks, ramson, and ail de bois. They appear in the springtime in deciduous forest areas from South Carolina to Canada and as far west as Missouri and Minnesota. West Virginia in particular is known for its celebration of this seasonal delicacy. Ramps grow in patches in cool shady areas with moist soil rich in organic materials. They begin to appear in late March and can be found through the end of May. By June the flowers have bloomed, leaving the seeds to appear on the leafless stalks. That is the end of wild leeks until the following season.

Ramps resemble scallions in that they have a white bulb at the bottom of the stalk, although the leaves are long, oval, and almost silky, with pointed ends. They often appear with distinctive reddish-purplish streaks along their hearts. After the leaves die back, usually some time in June, a scape, which is a leafless flower stalk growing directly from the root, appears. Clusters of small white flowers bloom in the summer. During late summer, the plants produce their three lobed pods, which gradually open to reveal shiny black seeds in small bouquet-like clusters.

Ramps are one of the last truly seasonal foods available in North America. While there are efforts underway to develop cultivation in order to preserve their availability, commercially available ramps are harvested from the wild. They require a forest setting to flourish and there is some debate among conservationists about whether or not commercial cultivation should be allowed. Ramps can be seeded whenever the soil is not frozen. Once planted, the seeds require a warm moist period to break root dormancy and germinate. Once the seeds break root dormancy, they then need a cold period to break their shoot dormancy. When the warm season returns, the plants begin to emerge from the soil. For this reason, late summer is a favorable time to plant. Seeds can be sown in early spring but there is no guarantee that they will sprout during that season because they need that cold period for the seedlings to emerge. Depending upon when the seeds are planted, in optimal conditions the seeds can take anywhere from six months to a year and a half to produce seedlings. Because of this, many growers prefer to work with bulbs or seedlings, transplanting them into the ground in March, once the ground has thawed.

Ramps have a strong flavor, a hybrid of onion and garlic, leaning heavily toward the garlic. They are edible from the tips of their leaves to their fleshy bulbous bottoms. Ramps are often considered a spring tonic for their early appearance combined with their strong flavor and infusion of minerals and nutrients at the end of a long winter season. Ramps have long been a favorite of ours. We’ve spent hours bent over crates of them in professional kitchens, meticulously cleaning and pickling them so that we could preserve their bounty for the months ahead. It’s a common practice and a beneficial one. There’s nothing quite like a great pickled ramp. We also love them fresh, simply grilled or sautéed so that the greens are slightly crisp and the bulbs are tender and toothsome. The flavor is like nothing else.

For those a bit more adventurous, read on for our ramp top cavatelli. 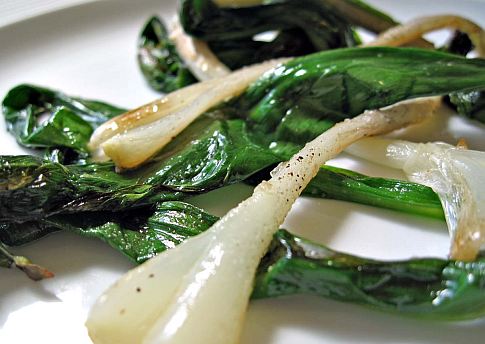 Combine the ramp top puree, ricotta, and water in a blender. Puree until smooth. Combine the flour, and baking powder in the bowl of a food processor and pulse to blend. Add the ramp mixture all at once and process to soft, firm dough. Turn out onto a lightly floured counter top and knead until smooth and silky. Depending upon the consistency of the ramp puree and the ricotta you may need to add additional flour to the dough to get the right consistency. Shape the dough into a ball, wrap with plastic, (or vacuum seal if you can) and let rest for at least 30 minutes before shaping pasta.

You will need a rolling pin, flour for dusting, and a butter knife or a bench scraper to shape the cavatelli by hand. Have a floured sheet pan at the ready on which to rest the finished pasta. Roll the dough out to a thickness of about 1/4″. Cut them into strips approximately 1/2″ thick. Cover the extra strips with a damp towel so the dough doesn’t dry out while you are making the cavatelli. Cut 1/2″ squares using a butter knife or bench scraper. Turn each square diagonally and then drag your butter knife or bench scraper at a 45-degree angle along the square, from left to right, The pasta will curl along the edge of your implement, leaving you with a beautifully shaped cavatelli. It may take a few tries to master the technique, but once you develop a rhythm things move quickly.

Lay the finished pasta out on a lightly floured sheet tray and cook immediately or freeze. Once frozen, transfer the cavatelli to a plastic bag and keep frozen until ready to use, up to two weeks.