The Disappearance Of The Instruction Manual

Instructions not included: what the vanishing manual says about us

To someone in 17th-century Europe, this was a deeply subversive notion. From the fall of the Roman Empire to the dawn of the Renaissance, age-old social hierarchies held firm. You were born into a station, whether peasantry or trade work or aristocracy, and you and your family remained there for generations. But then came science and technology, and with them new trades and opportunities. With no established guild system in place for many of these new professions (printer, navigator, and so on), readers could, with the help of a manual, circumvent years of apprenticeship and change the course of their lives, at least in theory.

These books, filled with ingenious methods, offered something new and relatively democratic: agency, skill, and command for anyone who could read.

Mechanick Exercises was not the first manual. Vitruvius’s Ten Books on Architecture is one of the only true manuals to survive from antiquity. It offers clear and concise instructions for how and where to construct a house (not in a dell, for instance), where to orient your summer and winter rooms, and many other useful matters. Scribes in the Middle Ages produced their shared guides too. One of the most consistently produced titles in the entire history of writing, the 15th-century Aristotle’s Masterpiece, is a sex manual. But where those early books served as compendia of sorts—the compiled wisdom on any given subject—Moxon’s manual and others like it promised something more: systematic treatments for solving complex problems, such as how to lift a horse with your little pinkie (and a pulley system), how to survey land and on building a fortification. These were books filled with ingenious methods, and they offered something new and relatively democratic: agency, skill, and command for anyone who could read. 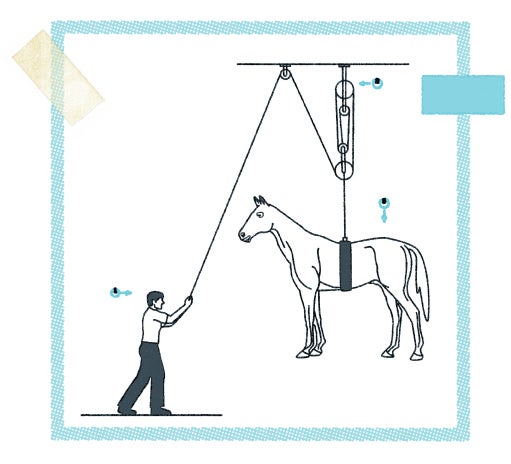 Moxon’s manual explained how to lift a horse with your pinkie (and a pulley system).

And so it went. As manuals explained more complex systems, they grew in size, developing into the heavy, barely penetrable and largely unread books that most people think of today. But then in the 1980s, the manual began to change. Instead of growing, it began to shrink and even disappear. Instead of mastery, it promised competence. My new iPhone, for instance, came with a “manual” that was about as brief as a Christmas card (and I did not read it). A recent rental car did not come with a manual at all, making its nonreading a snap (but finding out how to pop the trunk rather difficult).

The manuals of old, it turns out, have shape-shifted inward, into the devices themselves. That, or their information has been off-loaded to help-desk support or a parallel, Internet FAQ universe: a searchable realm often filled with answers to almost every question but the one you are asking. Change is the way of the universe, but what does it say that most of us now live our lives using tools that are, practically speaking, beyond our understanding or ability to fix? Have we traded away something important, perhaps even defining, about ourselves—a sense of our own autonomy and control over our tools—for the dubious benefit of convenience?

The Man Who Killed The Manual

If the era of minimalist manual design in which we live could be traced back to one person, it would be John Carroll. In 1976, Carroll, a linguistic psychologist, was finishing his Ph.D. at Columbia University and took a job at IBM’s Watson Research Center in Yorktown Heights, New York. His job was to help make computer programmers more efficient, but that quickly changed to a new focus—making computers more usable for average people. That was a big shift in thinking. “You have to remember,” Carroll says, “IBM was probably the richest computer research facility in the world, but at the time, the idea of focusing on the average everyday user was sort of off the radar.”

Carroll was doing, in essence, dissident research. He set up a lab, gave secretaries computers and manuals, and then studied them as they tried to accomplish regular office tasks. He tracked “frustration episodes,” observing as subjects became progressively more flummoxed by their manuals. “People would look at me, shaking, and they’d say, ‘I can’t do this.’ And then they’d get up and put their coat on. One person literally had to flee the building,” he says.

Though Carroll had worked at IBM for more than a decade, his quiet revolution—a culture-wide shift not just in the shape of manuals but in how we learn to use technology—didn’t coalesce until one day while he was on a vacation in Germany. He had just finished a manuscript that would become his groundbreaking minimalist opus, but he had no title for it. Then, in the basement of a castle in Nurnberg, he saw a postcard of a painting depicting an old German folktale: two professorial-looking gentlemen in a library standing over a young student who had a funnel affixed to the top of his head. The teachers are busily choosing potions from the library shelves and pouring knowledge down the funnel and into the boy. For Carroll, the image clearly represented the dominant paradigm in most scientific fields—the “systems approach,” a way of dividing the world into taxonomic orders and protocols of action. In computer science, that meant learning an arcane and exacting “command language” and typing directives precisely as prescribed by the system. Carroll’s book, The Nurnberg Funnel, outlined a new philosophy. Instead of focusing on the needs and values of the system designers, it shifted attention onto the end-user, the secretary in the office who needs to hyphenate a compound word.

Steve Jobs and Steve Wozniak, among others, quickly adopted a similar approach and more would soon follow. Writing a manual from a minimalist point of view, Carroll says, proved enormously successful because it harnessed the true source of all learning—active engagement. Short, succinct manuals allow the user to dive into many different tasks and to accomplish them quickly, thereby gaining a sense of control and autonomy that inspires further learning. “Skeptics would say we weren’t providing the user with any theoretical foundation,” Carroll says, “but we found that people got through their initial learning faster, and that later on, when they needed to learn more complex tasks, the users were also better at doing that, too.”

So manuals began to slip from view. They still exist, sure. Highly complex things, like jet planes or nuclear plants, rely on big integrated enterprise resource planning systems, into which an army of sensors and engineers log the status and service history of every part in order to maintain standards. Many think that BP’s failure, in effect, to update the manual of the Deepwater Horizon oil rig led to the spill in the Gulf. But for most consumer products, the manual has become less an object or a thing and more a verb, a service, a response to the statement most likely uttered (or yelled at the top of one’s lungs) by someone stymied by a gadget: Help.

According to Carroll, the help we once sought from a manual is now mostly embedded into the apps we use every day. It could also be crowdsourced, with users contributing Q&As or uploading how-to videos to YouTube, or it could programmed into a weak artificial intelligence such as Siri or Cortana. Help can even be predictive, tracking our keystrokes or vocal cues to steer us away from trouble before we find it. Xerox is already using predictive analytics to manage calls from Medicare and Medicaid recipients more effectively. And IBM’s Watson Engagement Advisor, part of a new generation of cognitive assistants, can analyze large sets of customer service problems to more efficiently answer (or even anticipate) problems during a purchase. Help may soon arrive in the form of augmented reality. Carroll suggests that technology like Google Glass might one day offer a “task intelligence” visual overlay to help users figure out objects in their field of view.

Augmented reality devices like Google Glass could introduce a new form of interactive manual into the world.

For most of us, the transition from physical manuals to embedded help has been slow, steady, and apparently benign, like the proverbial tide that lifts all boats—who would argue against help after all? The disappearance of the manual-as-book coincides, moreover, with documented realities about how people actually learn to use new tools and devices. Studies published by the Society for Technical Communication, which regularly reports on “human-machine interaction,” suggest that even when manuals are available, people tend not to read or use them.

Yet even as we gladly cede more and more control of our tools, a growing chorus is calling attention to the costs. In his book Who Owns the Future?, computer scientist and virtual reality pioneer Jaron Lanier uses the analogy of the Sirens from Homer’s Odyssey. The creatures would lull sailors into complacency with their beautiful songs, only to have their boats wreck on the rocks. Lured by the convenience of the Internet, search engines, and all that they promise, most consumers are, in Lanier’s estimation, similar to those doomed sailors: a little too ready to give “the sirens control of the interaction.” Kimberly Nasief, president and co-founder of Measure Consumer Perspectives, a consumer monitoring and customer service consultancy based in Louisville, Kentucky, wrote about how Apple’s ease-of-use might be making her a dumber user. She tried out an Android tablet, and the greater complexity of the operating system actually forced her to learn more: “It made me develop some critical thinking on how the system I was using worked. With Apple, I don’t have to do that. It does it for me. And that just might be dangerous. Dangerous in that if I no longer am learning, or if it’s done for me, then I might just get technologically left behind,” she wrote.

If manuals began as great equalizers, then their disappearance should at least give us pause.

Today the hazards of being left behind seem ever more real. Even Carroll notes that research has suggested an unforeseen consequence of the minimalist approach. Furnished only with a manual of one or two pages, users soon reach a comfort zone, a knowledge plateau from which they tend not to wander. The aggregate effect, culturally, may be that less is less. The less we’re inclined to know about our devices, the more beholden we are to the manufacturers that make them, and the more we offer control to those who, for good or for ill, know more than we do. If manuals began as great equalizers, then their disappearance should at least give us pause. By dispensing with them, we could, consciously or no, be setting the stage for something few would relish: a society divided.

This article was originally published in the February 2015 issue of Popular Science, under the title “Instructions Not Included”.