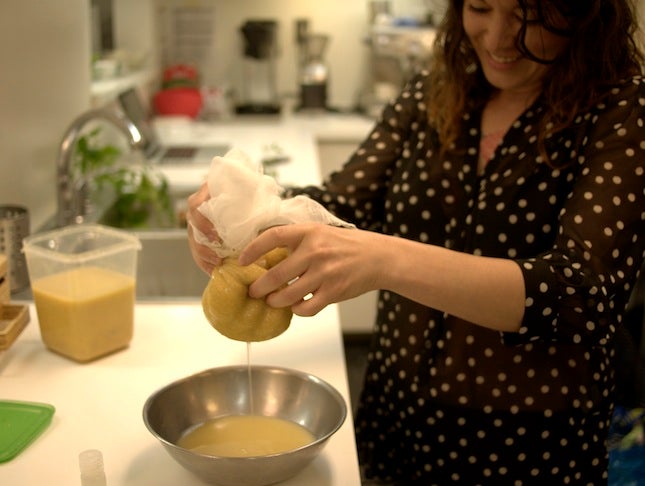 Think of corn on a hot summer’s day. Sweet, delicious, all-American corn. It’s stuck in your teeth and you barely care, as your practiced jaw scrapes the pure taste of the season from the cob.

Now think of high-fructose corn syrup. You probably don’t have an idyllic childhood memory to go along with the sugarglop that’s killing both the American people and the American tradition of agriculture. Just a guess!

HFCS, as it’s called, is a relentlessly common sweetener in everything from soda to bread. It’s used because, in bulk, it’s incredibly cheap, thanks to agricultural subsidies from the US government that encourage farmers to grow the high-yield, flavorless-when-unprocessed variety of corn used for HFCS. One of the many odd things about high-fructose corn syrup is that you can’t really buy the pure stuff in a store. What’s even in the stuff? That’s what artist and designer Maya Weinstein wondered–except she actually secured the ingredients for her thesis project at Parsons.

Weinstein went over to the Bon Appetit offices to demonstrate her kit, and, interestingly, it was a hit with the editors there. Before it’s filtered to remove its yellow color and much of its flavor, it “tastes like corn candy,” according to the editor of Bon Appetit’s site. The filtering removes any extant flavors that might not go with whatever you want to sweeten, and in mass production, this syrup is often purified to become as high as 90% fructose–nearly pure sweetness, basically.

The project isn’t really for mass consumption; the kit itself costs $70-80 in raw materials to yield just a small jar of corn syrup. Corn syrup is used by so many food producers because it’s cheap in bulk, and because the government gives lots of rebates and tax incentives to use the stuff–in small doses, it’s cheaper to go with honey or plain sugar. But it’s a pretty interesting experiment to see how something we all eat all the time is actually made. Check out the project here.