Xanthan Gum, or My First Hydrocolloid 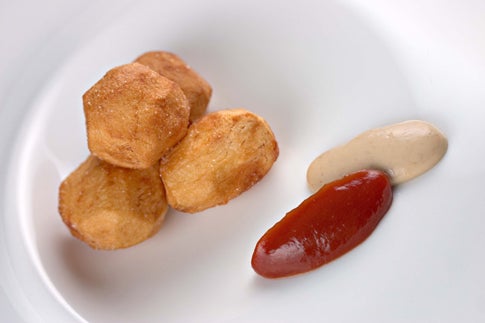 The title may be a bit of a misnomer: Really the first hydrocolloids that most people use tend to be flour, gelatin, and cornstarch. The difference is that when people first learn to cook, they don’t realize how many of the ingredient they use are hydrocolloids, and so they never learn how to utilize them efficiently. Hydrocolloids are ingredients that control water in a recipe, binding with liquids to form gels or sols, colloidal suspensions. When we teach classes about hydrocolloids, we always start with xanthan gum, because it has a wide range of capabilities and is relatively easy to use and to understand.

Xanthan gum is produced through the fermentation of glucose or sucrose by the Xanthomonas campestris bacterium. In the United States, corn sugar is the primary source of the fermentation. Xanthan gum is soluble in both cold and hot water. It works well across a wide pH range, and is very salt-tolerant. For practical applications, xanthan gum is dispersed with high shear, and forms sols or thickened liquids, rather than gels with a solid structure. It can be combined with other compatible hydrocolloids to form gels, although it cannot be used to create one on its own.

Xanthan gum is notable for its high viscosity levels and, when used in excess, it can create unpleasantly slimy textures. It is thixotropic, which means that its viscosity will thin out at high shears and then thicken again once it sits. It is often used as an emulsifier to prevent syneresis, the weeping of fluids from an emulsion or puree. These qualities are all especially useful in working with sauces and vinaigrettes. The thixotropic ability allows a cook to put a light layer of sauce on the main ingredient, which will thicken as it travels from the kitchen to the dining room. Meanwhile, the viscosity allows the sauce to cling to the food, and the emulsifying properties keep everything in suspension to avoid any separation of flavor.

Additionally, xanthan gum is known to inhibit the formation of ice crystals. Unlike most plant and animal cells, its strength is actually improved by the freeze-thaw cycle. It is often used in frozen preparations to ensure a smooth texture and mouth-feel. It can be used in low-fat preparations to replace egg yolks as a thickener, and to mimic the taste of fat on the palate.

Xanthan gum also has the ability to create a structure that traps air bubbles. This ability is very useful in providing stabilization for foams, especially when combined with other hydrocolloids like methylcellulose and hydrolyzed soy proteins. Xanthan gum is used in gluten-free baking to provide viscosity to doughs and batters, which, when combined with its ability to hold on to air bubbles, allows the dough to rise without the benefit of a gluten structure during the baking process.

One of the best aspects of xanthan gum is that it is effective even when used in very small quantities. This means that there is very little dilution of the flavor of the main preparation. For most culinary purposes it is utilized at quantities of less than 0.4 percent. This allows chefs to have the benefits of xanthan gum’s more functional qualities while avoiding the slimy texture that can occur at higher concentrations. It is usually clear and does not affect the color or flavor of the preparations that it is added to. Xanthan gum is readily available in health food stores and supermarkets.

We’ve included a recipe for yuzu-kosho ketchup. Yuzu-kosho is a spicy Japanese paste that can be found in Asian specialty markets. It is made from a combination of yuzu, a Japanese citrus fruit, and chiles, either green or red. Our yuzu-kosho ketchup is a spicy condiment that goes well with everything from French fries to steak tartare or barbecue.

To remove the air incorporated by blending the ketchup, place it in a container so that it comes only one-third of the way up the sides. Place the container in the chamber of the vacuum machine and close the lid. The vacuum will begin to pull the air bubbles out of the ketchup. The ketchup will begin to climb the sides of the container: when it comes to just below the rim, shut the machine off. The chamber will then fill with air again and the ketchup will shrink back down in the dish having dispelled many of its air bubbles. This process should be repeated until the ketchup loses 95 percent of its air bubbles and changes from pale red to an intense red in color. Use immediately or reserve in the refrigerator until ready to serve.