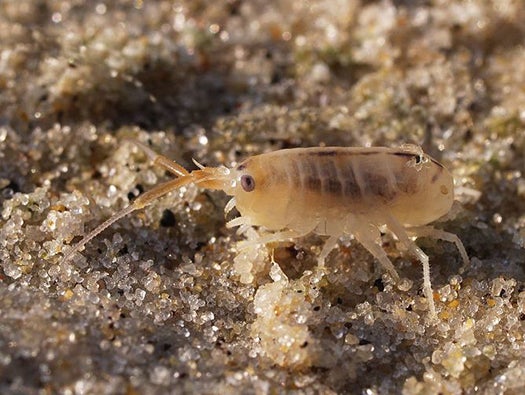 The idea that tiny amounts of antidepressants present in our rivers and estuaries may be affecting aquatic life is generally met with surprise, sometimes skepticism, or even a degree of humor.

The public were first alerted to pharmaceuticals in the environment in the 1990s through studies which showed that synthetic oestrogens, such as in the contraceptive pill, could feminise male fish, even in incredibly low concentrations of nanograms per liter (ng/L). This led to concerns of a similar effect on male human fertility, although it’s been hard to draw any conclusions.

The idea that even tiny amounts of chemicals might dramatically alter the physiology of fish and other aquatic organisms isn’t that new. Back in the 1980s scientists were aware that concentrations even below 10ng/L of tributyltin or TBT, a compound used in anti-fouling paints for ships’ hulls, would cause female dog whelks (a sort of sea snail) to grow a penis. This resulted in catastrophic reproductive failure in females which wiped out snail populations along the world’s coasts, which had knock-on effects on organisms further up and down the food chain.

A more recent example is diclofenac, a non-steroidal anti-inflammatory drug given to lame cattle in India and Pakistan. While considered harmless to mammals, what was not predicted was that vultures preying on dead cattle would suffer catastrophic renal failure, resulting in their populations plunging by 90%.

Some scientists have suggested that reduced vulture populations led to a boom in feral dog populations and an increase in rabies among the human population. Highly publicized, this focused people’s attention on the toxicological impact of human and veterinary drugs on wildlife.

So what’s the evidence that anti-depressants, now quite commonly prescribed medicines, are affecting aquatic wildlife? After all, studies have found that sewage effluent entering rivers can carry anti-depressants at concentrations up to around 1µg/l (one microgram, equal to 1000ng/L), although in most rivers the concentrations recorded are considerably less at around 10-20ng/L. There is growing evidence that even at these low concentrations of under 100ng/L medicines can cause changes in a wide range of biological functions and behaviours.

For example, many anti-depressants were designed to modulate serotonin. Serotonin is a hormone that is found throughout the animal kingdom and is known to play a role in controlling behavior, growth, metabolism, reproduction, color, and the immune system.

At the Institute of Marine Sciences in the University of Portsmouth we published an article in 2010 that demonstrated that serotonin in amphipods, a crustacean rather like a tiny prawn, was responsible for controlling their preference to seek light or dark areas.

As amphipods high in serotonin preferred light areas, would anti-depressants such as fluoxetine (Prozac) have the same effect? We found that a few weeks’ exposure to 10-100ng/L of fluoxetine – about the level found in rivers around urban areas – resulted in a five times greater preference for light.

Many effects on many creatures

A special edition of the journal Aquatic Toxicology has pooled together studies of antidepressants in the aquatic environment. The most striking results suggest that many species, including fish, snails, bivalves, cuttlefish and crustaceans, are affected by anti-depressants even in low concentrations. The observed effects include altered swimming and behaviour patterns, locomotion, immune function, reproduction, feeding and predator behavior through to gene expression – even a physical change of colour. There appears to be considerable variability between the species affected.

Despite these findings however, there is no evidence that these particular pharmaceuticals have the same effects in the wild as all studies to date have been laboratory studies. While it’s relatively easy to determine whether a fish has had past exposure to, for example, an oestrogenic chemical, it’s currently very difficult to determine abnormal behavior from exposure to antidepressants. Others have expressed caution, suggesting that these studies must be repeated at other laboratories and rigorous measurements must be taken on the exposure concentrations used in the laboratory experiments.

There are other factors to consider too: while the crustaceans exposed to serotonin showed a preference for light, some of the species studied also carry parasites which have evolved to alter their host’s serotonin precisely so that they swim in open areas. This makes them more vulnerable to being eaten – the ultimate goal of the parasite, for whom the crustacean is merely an intermediate step towards entering the predator’s body where it completes its lifecycle.

This isn’t just about anti-depressants. We consume hundreds of different types of medication every day and they all appear to some extent in sewage effluent. Even the most modern, most costly sewage treatment processes still aren’t able to filter out all chemical contaminants.

The question of “greener” pharmaceuticals that break down more readily into harmless chemicals has been suggested, but this may prove incredibly difficult to achieve given they are formulated specifically to work optimally in the human (or animal) body. Some countries are strongly debating the need for national take-back programs whereby unused medication is collected and appropriately disposed.

I expect the next few years will strengthen the evidence that anti-depressants and other biologically active compounds are pollutants of concern, in which case they will join a long list of chemicals, including industrial pollutants such as sulphur and lead, whose effects on health were scientifically established and regulations passed to protect human and environmental health.