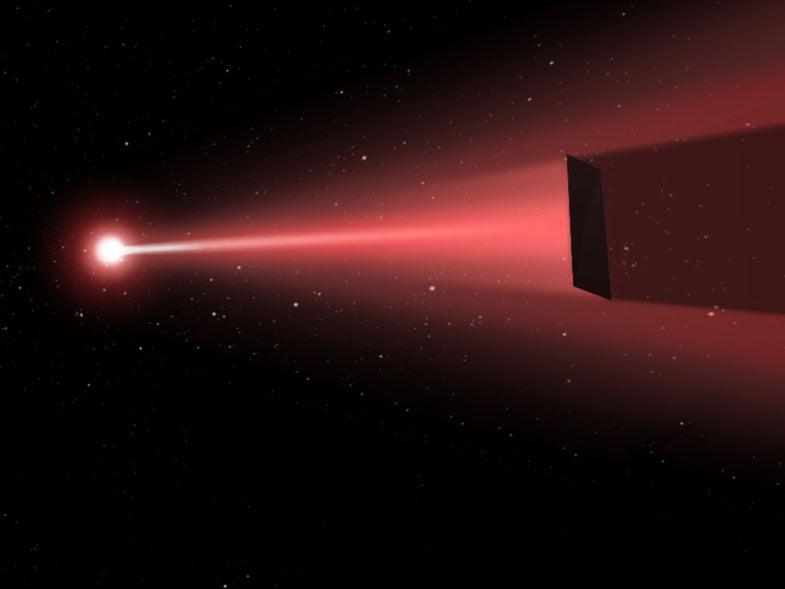 The $100 million Breakthrough Starshot mission aims to use lasers to launch swarms of chip-sized probes on roughly 20-year journeys to Alpha Centauri. The ambitious initiative faces many challenges. How will the project ever launch space-chips to another star?

How much interstellar exploration will $100 million actually buy?

A common misconception is that Breakthrough Starshot intends to send probes to Alpha Centauri with just an initial $100 million. In fact, the cost of the final system might be comparable to that of other large science projects such as CERN’s Large Hadron Collider, “about $10 billion,” Worden says.

What $100 million will buy is “research and development that is absolutely critical to push forward,” says Lubin. Breakthrough Starshot has identified more than 20 major technical challenges an interstellar mission would face, such as building working spacecraft each only a gram or so large, sails that can survive high-energy laser beams for minutes, power systems that can generate and store huge amounts of energy, and lasers that can fire in unison and sync up to generate unprecedentedly powerful beams that can focus on tiny moving targets tens of thousands of miles away.

The project is currently in the planning phase of what to do with its $100 million, says Lubin, an experimental cosmologist at the University of California, Santa Barbara, whose previous research helped lead to Breakthrough Starshot. With these initial funds,  “we will build a prototype laser array in the 10- to 100-kilowatt class, gram-scale ‘star-chips’ with imaging and other sensors and a laser communication system, and prototype sails, as well as explore the many technical challenges to building a full system,” he says.

The initiative could also piggyback the prototype star-chips onto interplanetary missions that others build and launch, to see how well the star-chips do on missions inside the solar system, Lubin says. The advantage of the star-chips is that they can be massproduced, allowing for an extremely low cost per spacecraft, therefore enabling very large numbers to be deployed. “For example, a single kilogram of payload on a normal interplanetary mission could carry roughly 1,000 star-chips,” he says.

A major focus of the initial research will be to identify what costs the most in the project and figure out how to drive those costs down.

“We are counting not just on technical increases in capability over time, but radical decreases in price in certain critical areas along the way,” Lubin says. The hope is that advances in photonics will improve both the cost and power of laser array technology, just as computers have improved in power and cost over time.

After this basic research is conducted, the project would begin work on a prototype laser array that is tens of meters in diameter, significantly smaller than the final system but big enough to work on all the key challenges the final system would face when it comes to launch.  “That would cost on the order of $1 billion — maybe $500 million, maybe $1.2 billion,” Worden says. With this laser launch prototype, Lubin says, “we can launch probes, place them in various Earth orbits, and possibly send them to the moon.”

Once researchers finish extensively testing and experimenting with the prototype, they can build the final system, a laser array on the order of a square kilometer in size. The costs for the prototype and final systems will be huge, money that may come from private donors and perhaps from governments, Worden says.

Before Breakthrough Starshot begins an interstellar journey, it could launch interplanetary missions to explore mysterious corners of our solar system. “A very interesting intermediate mission would be to get a probe out to near-interstellar space and measure the particles and fields there,” Worden says. “Today there’s at least an order-of-magnitude level of uncertainty as to what the interstellar medium is like.” 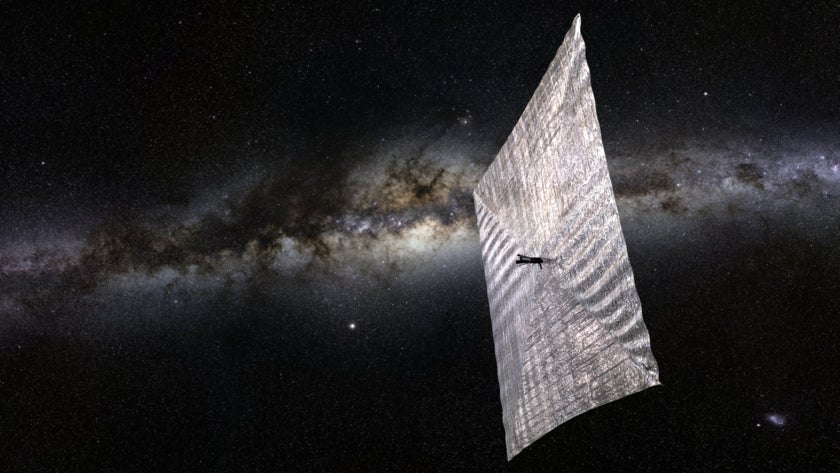 How will Breakthrough Starshot probes send their reports back to Earth?

Breakthrough Starshot currently envisions sending gram-scale star-chips each using a 1-watt laser to communicate with Earth. Can such tiny lasers could effectively transmit data back to Earth? The project says that it has a solution.

To receive the data from each probe, the project proposes that the laser array that launched the star-chips will also serve as a large “phased array” telescope, one sensitive enough to receive laser signals from each miniature spacecraft. The array is composed of many transmitters, each emitting at infrared or near-infrared wavelengths. It would not be difficult to make each element of the array a receiver as well as a transmitter.

The probes can also use the reflective sails they rely on for propulsion as mirrors, to help focus their lasers for communications back to Earth.

To help compensate for glare from Alpha Centauri and other stars that might swamp out the light signals from star-chips, each probe will use a very narrow-bandwidth laser — essentially, a light with a very distinctive color, one that researchers will be able to distinguish from all the other lights in the sky.

Lubin calculates that each star-chip might be capable of transmitting data straight back to Earth at a rate of nearly a kilobit per second. In addition, there are other strategies the project may follow to improve data transmission. For instance, Breakthrough Starshot does not plan to send just one probe to Alpha Centauri — it might launch an armada of thousands, one after the other. “You could imagine a bucket brigade, with one probe sending data back to another, which sends it back to another,” Lubin says. “That’s much more complex though, since they each have to figure out where the other probes are, and not the preferred solution.”

The project is also not limited to gram-scale probes — the roadmap that Lubin set out for interstellar flight suggests “we have a lot of flexibility when it comes to masses, sizes, and capabilities of probes that we’d want to send, although the more massive a craft is, the slower it will be, unless you have a more powerful laser,” Lubin says.

Breakthrough Starshot aims to construct a laser array as powerful as 100 gigawatts on the ground that, when firing to launch probes to Alpha Centauri, “would release about the same amount of energy that launching a large rocket today involves,” Worden says. The idea of building a giant laser cannon designed to blast targets in space might easily inspire Tom Clancy-esque scenarios of terrorists hijacking the array for space warfare.

If the laser array does get built, Worden notes it will only fire a couple of minutes a day, limiting its chances of damaging unintended targets. There would also be international arrangements to schedule the activity of the array so its beams do not cross any flight paths. “We’ve already talked with people at the White House and NASA, and the European Space Agency as well, and there will be talks sometime very soon with heads of several other space agencies around the world, as well as with people in national security,” Worden says. Another agency they will likely contact is the United Nations Committee on the Peaceful Uses of Outer Space, he adds.

Currently lasers are regularly fired into the sky for peaceful purposes — for instance, the Gemini Observatory uses a laser in Hawaii to help it deal with the distorting effects that the atmosphere can have on its observations. Anyone in the United States firing a laser skyward must first get clearance from the U.S. Air Force’s Laser Clearinghouse, and other nations often coordinate with the Laser Clearinghouse as well, suggesting that it could also one day help deal with Breakthrough Starshot’s lasers. “I’m personally very familiar with the Laser Clearinghouse,” says Worden, a retired U.S. Air Force brigadier general.

As for concerns that the laser array might get hijacked, “you could imagine that if rogue folks got a hold of it, it could do a lot of mischief, but the same would hold true if a rogue power seized control of a rocket,” Worden says. “Before we would get to the level of building it, we would certainly engage in internationally approved approaches to controlling it, such as kill switches one could turn on at the last minute. These controls would be similar to ones that exist for launching large rockets today.”