Does Using The AC Make It Hotter Outside?

Short answer: Yes, but only at night 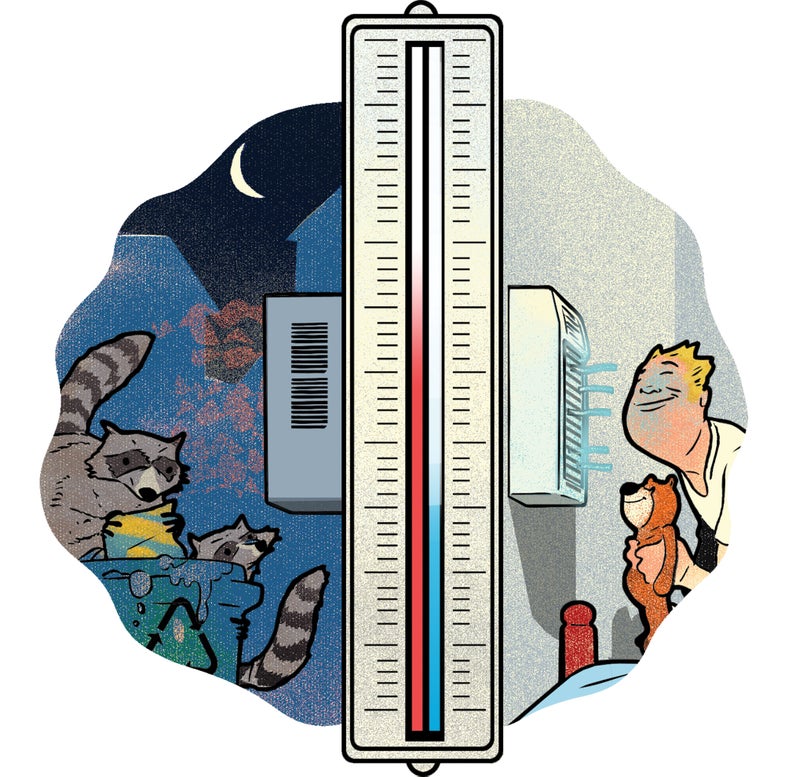 In 1975 Texas Monthly published an article that tried to explain why Houston had become “The Hottest Place in the Whole USA.” It read: “One heat-producing machine is the very device designed to eliminate heat–the good old air conditioner.” An AC unit transfers warmth from inside buildings to the air outside, and it guzzles electricity, which generates waste-heat that must be vented too.

Over the years, climatologists have tried to measure this effect. In 2007 Yukitaka Ohashi of the Okayama University of Science in Japan found that ACs can raise temperatures in downtown Tokyo by as much as 2°F. A 2013 study modeling temperatures on the streets of Paris found that the effect was most acute at night–surprising, given that we use the most air conditioning when the sun is up.

That’s because the planetary-boundary layer–the part of the atmosphere in contact with Earth’s surface–is thickest during the day, so the extra heat we generate gets dispersed upward. At night, however, the layer shrinks from 1 or 2 miles thick to as little as 330 feet, so the heat remains closer to the surface.

For a 2014 paper, Francisco Salamanca and colleagues at Arizona State University modeled the effects of air conditioning on surface air temps in Phoenix. They found a nighttime increase of about 2°F (and nothing much during the day). But don’t ditch your AC just yet. “The solution is not turning off the air conditioners,” Salamanca says. Air-conditioning systems can save your life, especially during a grueling summer spell.

Here’s an alternative: Route the excess heat through a city’s waste­water system. (Water’s higher heat capacity means it can move about four times as much energy as air.) Done right, Salamanca argues, this plan would reduce temps on the street.

This article was originally published in the August 2015 issue of Popular Science, under the title “Does Using The AC Make It Hotter Outside?”

Ask Us Anything
Climate Change
heat