Farmers Rip Up Experimental Golden Rice Plants In The Philippines

As scientists prepare to submit the genetically engineered rice for regulatory approval, some locals protest. 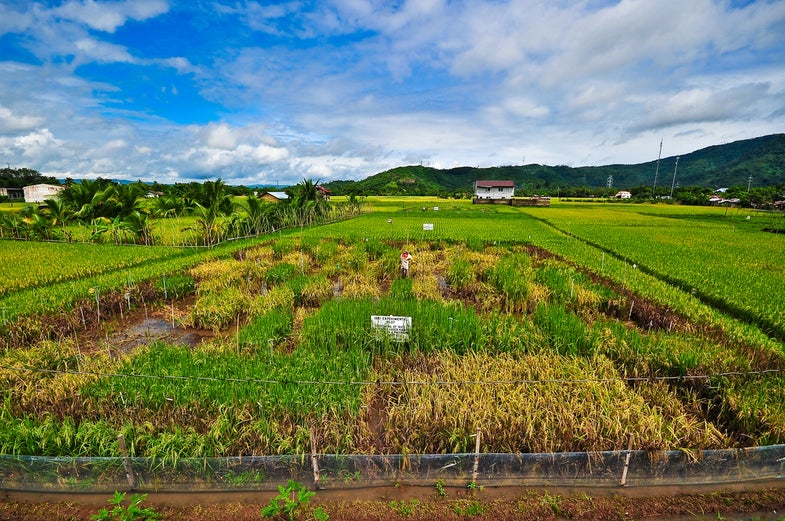 A decade and a half after it was first invented, genetically engineered rice may soon grow in farmer’s fields for the first time, in the Philippines. Just as some in the U.S. oppose GMO technology, however, so do some Filipinos.

After seeing the BBC’s report this week that Philippine scientists are close to submitting golden rice—rice engineered to make vitamin A—for regulatory approval, I looked for local news on the development.

One of the farmers’ worries is the cost of GMO seeds and the privatization of the nation’s staple crop, spokesman Bert Autor told Remate. The International Rice Research Institute expects golden rice’s price will be the same as regular rice. The rice’s inventors and patent-holders arranged for their licenses to be available without royalties.

The protesting farmers uprooted nearly all of the plants in one field so that one field test can’t continue, according to a statement from the Philippine Rice Research Institute. Nevertheless, golden rice research in the Philippines will continue, the institute said in another statement.

The farmers also believed that golden rice would be unsafe to eat. Others in the country share their worries. In June, a group called Green Moms held a rally in Quezon City to protest golden rice. Protestors PhilStar talked with were primarily worried about the rice’s safety for kids.

Both the farmers and the Green Mom members seemed opposed to genetically engineered food generally. Many major science and health organizations say that just because a food is genetically modified doesn’t mean it’s unsafe. Groups such as the American Association for the Advancement of Science and the World Health Organization support the testing of new GMO plants as they’re developed, as each could affect human health differently. Safety tests would be part of the Philippine government’s approval process for golden rice, Philippine Rice Research Institute project leader Antonio Alfonso told the BBC.