The new substance is called putnisite. 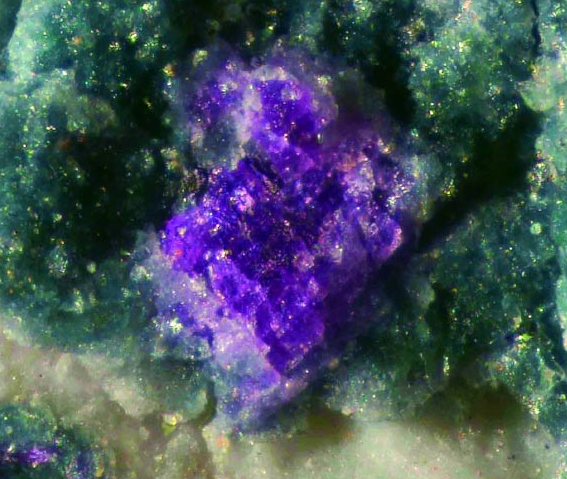 A previously unknown mineral has been discovered in a remote location in Western Australia. The mineral, named putnisite, appears purple and translucent, and contains strontium, calcium, chromium, sulphur, carbon, oxygen and hydrogen, a very unusual combination.

While dozens of new minerals are discovered each year, it is rare to find one that is unrelated to already-known substances. “Most minerals belong to a family or small group of related minerals, or if they aren’t related to other minerals they often are to a synthetic compound–but putnisite is completely unique and unrelated to anything,” said Peter Elliott, co-author of a study describing the new substance and a researcher at the South Australian Museum and the University of Adelaide, in a statement. “Nature seems to be far cleverer at dreaming up new chemicals than any researcher in a laboratory.”

It appears as tiny semi-cubic crystals and is often found within quartz. Putnisite is relatively soft, with a Mohs hardness of 1.5 to 2 (out of 10), comparable to gypsum, and brittle. It’s unclear yet if the mineral could have any commercial applications.

Putnisite was discovered during prospecting for a mine at Lake Cowan in southwestern Australia, and is named after mineralogists Andrew and Christine Putnis. Mineral names are usually proposed by the discoverer, as in this case, but must be approved by the International Mineralogical Association.