The Disquieting Delights Of Salt-Rising Bread

How Clostridium, a nasty pathogen, makes an infectiously delicious confection 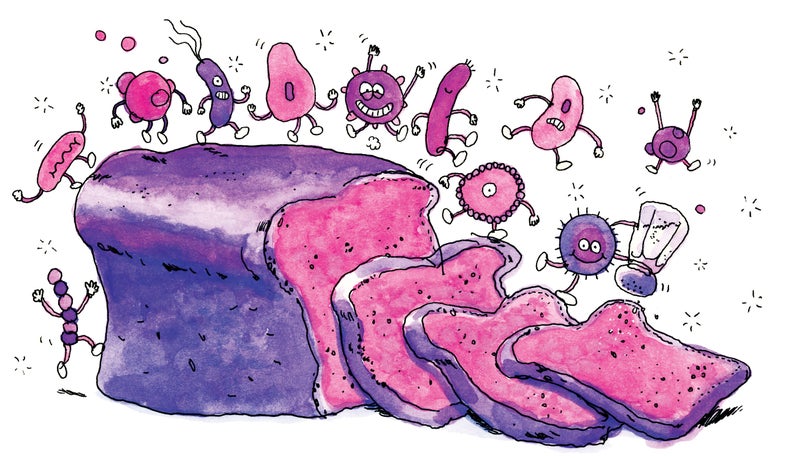 I’ve recently come across a fringe fermentation method that, unlike the breads and brews and yogurts and pickles and misos we know and love, isn’t run by the usual benign microbes. The engine behind this fermentation method is Clostridium perfringens, a close relative of bacteria that cause botulism, tetanus, and food poisoning. It can eat flesh. It gives gas gangrene its name by causing putrefying flesh wounds that bubble and foam with flammable hydrogen. And it can make something surprisingly delicate and tasty.

As befits a nasty pathogen, Clostridium perfringens grows aggressively. Its cells can divide every ten minutes, a handful turning into trillions of hydrogen makers overnight. That hydrogen gas can leaven dough just as yeast-generated carbon dioxide does. The result is something known as “salt-rising bread.” A century ago, a scientist went so far as to bake bread leavened with Clostridium perfringens drawn from an infected wound, in what the West Virginia Medical Journal called “perhaps the most macabre experiment in culinary history.”

And so I present to you an all-you-can-eat story not about the limits of stomach capacity, but about the far shores of edibility.

The origins of salt-rising bread are unclear but seem to lie in the nineteenth-century American frontier, where it was likely difficult to obtain fresh yeast or keep a bread starter cool and regularly fed. The salt-rising process produces a leavened loaf from grains and water in about eighteen hours. The name is misleading, because salt doesn’t play a major role. (Perhaps “salt-rising” was just a way of saying “yeastless-rising.”) The real key to the process is heat: scalding-hot liquid to start with, then a feverish but perfringens friendly 100 to 115 degrees Fahrenheit for the starter, sponge, and dough.

Of course there are many different recipes and contradictory advice on the details, but the basic process begins with making an unusual starter. You boil milk or water, pour it over some cornmeal and/or wheat flour and a little salt, and let the hot mix sit in a warm place overnight until it gets bubbly and smelly from bacterial growth. Cornmeal and milk accelerate the process and help flavor the bread, but they’re not essential. You mix the starter with additional flour, water, and baking soda into a batter-like sponge, and keep it warm for a few more hours until it, too, swells with bubbles. Then you add enough flour to make a dough, shape it, put it in a pan, and keep it warm for another few hours until it has doubled in volume, at which point you bake it.

The result is a tight-grained, dense yet tender loaf with an unusual aroma that’s usually described as “cheesy.” The social historian J. C. Furnas, who learned to love salt-rising bread as a child in the early twentieth century, wrote that “the flavor was once well defined by my sister as like distant dirty feet,” but to his older and more discerning self it tasted “as if a delicately reared, unsweetened plain cake had had an affair with a Pont l’Eveque cheese.” In my experience, salt-rising breads made with milk smell like a combination of swiss and parmesan — sharp rather than stinky. Milk-free salt-rising breads tend to be pungent in their own less cheesy way, though one of them, my all-time favorite so far, came out with a wonderful washed-rind aroma.

This curious flavor variability in salt-rising breads comes at least in part from variability in the microbes in the flour and cornmeal that we select to do the fermenting. And the selection process is pretty drastic. You notice that the recipe starts with scalding-hot liquid poured onto the dry ingredients. This step kills all of our familiar friendly yeasts and lactic acid bacteria, and, in fact, most microbes of any kind. The survivors are those bacteria that happen to be present as dormant and tough spores, which are actually stimulated by the high heat to germinate when the temperature drops back down to livable levels.

Does that situation ring a warning bell? It should. The standard recipe for salt-rising bread instructs us to do something we’re warned against in the name of food safety: leave thoroughly cooked foods to sit in a warm place for hours. Cooking kills bacteria that are already active, but spores survive and are stimulated to grow — and grow fast — when the food temperature drops from piping hot to warm. That’s exactly how Clostridium perfringens ends up being a common cause of food poisoning. And yet in salt-rising bread we make a point of encouraging it.

The realization that the salt-rising bacterium was a form of pathogen came in 1923, when a USDA microbiologist named Stuart A. Koser analyzed commercial salt-rising starters. He found that they were teeming with Clostridium perfringens, then called the Welch bacillus, a microbe already known to be very common in soil, water supplies, and foods, and especially numerous in the human intestine and in sewage. It hadn’t yet been connected with food poisoning, but it was implicated in gangrenous flesh wounds. So Koser checked to see whether bakery loaves of salt-rising bread contained any of the bacillus. Indeed they did, but in the form of spores rather than live cells. He tested these bread strains on guinea pigs and found that they didn’t cause gangrene.

He obtained a bacillus culture that had originally been taken from a soldier’s infected wound. And he made bread with the wound bacteria.

Koser then wondered if a known disease strain could grow well enough in dough to leaven it and so pose a hidden hazard to the consumer. So he obtained a bacillus culture from the army that had originally been taken from a soldier’s infected wound. It was called the “Silverman” strain, probably after the soldier or his doctor. And Koser made bread with these wound bacteria.

“The salt rising bread prepared with the Silverman strain compared favorably in size and texture with that prepared from the [commercial] starter,” he reported. Regrettably but understandably, he didn’t report on the flavor. Less understandably, he didn’t test the wound-risen bread for toxicity. But his creepy experiment made clear that there were different strains of the bacillus with different toxicities, and that though the strain in the commercial breads was relatively innocuous, it was possible that other breads might contain a dangerous strain.

It wasn’t until the 1940s and ’50s that scientists recognized Clostridium perfringens as a leading cause of foodborne illness as well as wound infections. Since then, they’ve found that there are at least five major types of the bacterium that produce different toxins and cause different kinds of disease. Their surveys have also found that most samples from the general environment don’t produce the toxin that causes food poisoning.

The safety of salt-rising bread was revisited in 2008 by a physician at West Virginia University and a microbiologist at the University of Pittsburgh. Professors Gregory Juckett and Bruce McClane noted Koser’s “macabre” but inconclusive 1923 experiment, and set out to determine whether salt-rising bread “should be viewed as the Appalachian equivalent of fugu, the poison-laden pufferfish of Japanese gourmands.”

They analyzed a number of bread starters and found that all of them contained strains of Clostridium perfringens type A, the group associated with food poisoning rather than wound infection. But none of these strains actually produced toxins. Given that finding, together with the fact that both toxins and active bacteria are inactivated by the heat of baking, and the lack of any known cases of the bread causing illness, Juckett and McClane concluded that “it seems reasonable to continue the consumption of this delicious old-fashioned bread.”

Good! It also seems reasonable to begin exploring new possibilities for this old-fashioned and unusual process. Where familiar fermentations convert food carbohydrates primarily to alcohol or to lactic or acetic acid, Clostridium perfringens produces a cocktail of organic acids that includes acetic and lactic but also butyric — the characteristic sharp smell of aged cheese — as well as propionic — typical of Emmental-style swiss. A hot loaf of just-baked clostridium bread emits enough of these volatile acids to sting the inquiring nose. Milk in the starter seems to boost the butyric, but I’ve found that even dairy-free breads can sometimes be good and cheesy. It should be possible to select clostridium cultures and starter ingredients to produce distinctive flavors reliably.

The most useful practical survey for the salt-rising experimentalist is a 2002 article by Reinald S. Nielsen in issue 70 of Petits Propos Culinaires, the quirky small-format journal published in the UK by Prospect Books. Nielsen had started making salt-rising bread in the 1950s, and over the years collected and tested old recipes and sent samples to a microbiology lab for analysis. He discovered that cornmeal is a far richer source of Clostridium perfringens than wheat flour, but that various materials can serve as slow but workable sources of starter microbes. Not just all kinds of grains, milled or flaked, conventional or organic, including packaged breakfast oatmeal and shredded wheat, but even bark from oak and black locust trees. Taste-of-place fans take note: Clostridium perfringens is everywhere. The possibilities are endless.

If you do give clostridium bread a try, a word of caution: Don’t lick the spoon or nibble the raw dough. Just in case. Remember which family of microbes you’re playing with.

Salt-rising bread is most conveniently started in the evening to bake late the following afternoon. 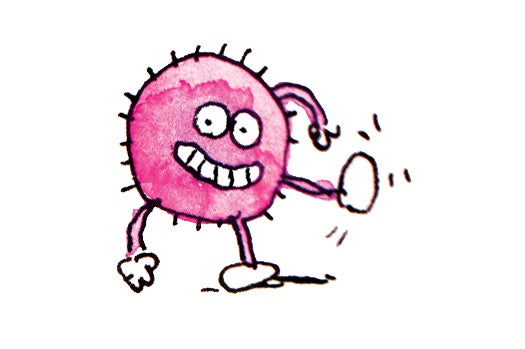 The body-heat fermentation temperature is essential for Clostridium perfringens to thrive. Before you start, calibrate the low end of your oven thermostat to hold a constant 100 to 110 degrees Fahrenheit, or set up a water bath and check its temperature regularly.

Combine dry ingredients in a bowl or large jar. Bring milk just to the boil and pour over dry ingredients. Mix briefly, then cover loosely and keep warm, 100 to 110º F, for 8 to 10 hours.

Add the soda and water to the starter, then stir in enough flour to make a thick batter. Cover and keep warm again for 3 to 4 hours, until the batter is spongy with bubbles.

To make the bread:
1 t salt
the sponge
3 to 4 C all-purpose flour

1. Stir salt into sponge, then knead in enough flour to make a resilient dough. Divide the dough between 2 greased loaf pans and allow to rise in a warm place until the volume has significantly increased, 2 to 6 hours.

2. Preheat oven to 425º F. Bake the loaves for 45 minutes or until nicely browned. Remove loaves from pans and cool on a rack.

This article appears in issue 11 of Lucky Peach_._

About Harold McGee
Harold McGee writes about the science of food and cooking. He’s the author of On Food & Cooking: The Science & Lore of the Kitchen, and_ Keys to Good Cooking,_ and posts at curiouscook.com.

About Lucky Peach
Lucky Peach is a quarterly journal of food and writing. Each issue focuses on a single theme, and explores that theme through essays, art, photography, and recipes. Issue 11, the All You Can Eat issue, hits newsstands today. If you loved this–or even just strongly liked it–why not subscribe to the magazine here? At least visit our website at lky.ph or follow us on Facebook and Twitter.