Here’s what happens when lightning doesn’t hit the ground

Upside down lightning is a seemingly rare weather event. 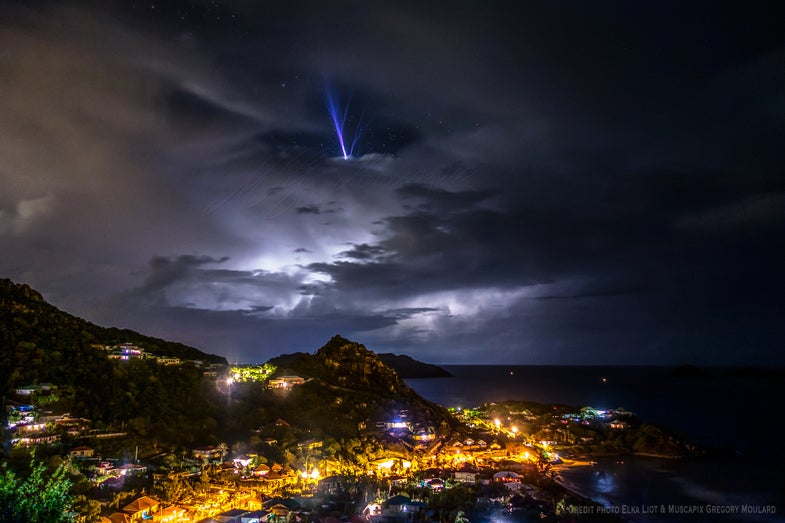 Everyone loves a lightning show: big bolts of electricity heading to Earth. But there’s an entire display above those billowing masses that you are probably missing.

In 2001, researchers scanning the sky with a low-light camera at Puerto Rico’s Arecibo Observatory noticed something bizarre: Lightning exploding from a cloud’s top and heading straight for space. The trajectory was baffling. Thunderbolts form when a negative electrical charge—gathered from an incoming storm—builds up near the bottom of a cloud. If enough energy accumulates, it breaks free, sending the classic bolt to Earth. More often, however, the electrons stay in the cloud, traveling upward until they hit the positively charged top, where they cancel out. Except in this case. Take a look:

Climatologists think unusually high wind is shoving all those plus signs out of the cloud, allowing the flash to break free. Once loose, this backward lightning—now called gigantic jets—travels until it hits the atmosphere’s nearest proton-filled object: the ionosphere, situated at the edge of space about 50 miles up.

Scientists spot gigantic jets most often in the tropics, perhaps because those storms are taller with more-violent winds. In theory, the jets grow slowly enough that a smartphone camera can snap them. But act quickly: They last a mere second; two if you’re lucky.

This article originally appeared in the July-Aug 2017 Extreme Weather issue of Popular Science.