What Happens When A Volcano Erupts Under A Glacier?

In Iceland, a question of ice and fire 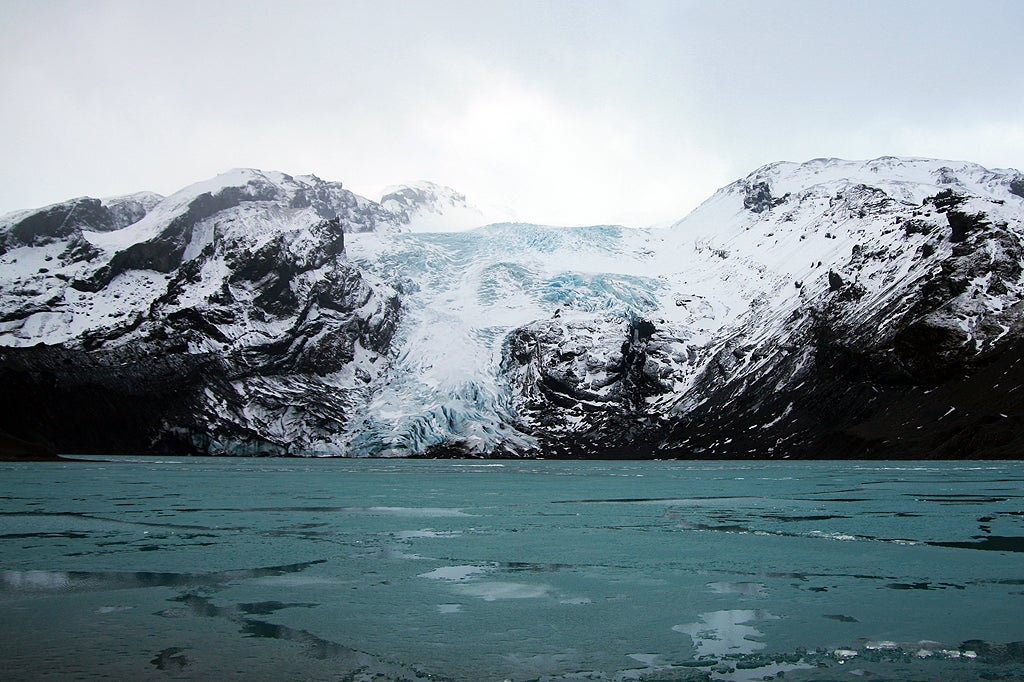 When Iceland’s Eyjafjallajökull volcano blew up in 2010, the relatively small eruption belched out a 30,000-foot-tall plume of ash that shut down airports throughout most of Europe for six days.

Now Iceland is warning airlines that another volcano named Bárðarbunga may be about to blow. On Monday scientists registered the area’s largest earthquake since 1996, and they’ve spotted magma welling beneath the ground, causing Iceland’s Met office to issue a code orange risk level to the aviation industry, Reuters reports. On the scale, which comes from the International Civil Aviation Organization, the only thing riskier than orange is red. Now, the Iceland Review reports that areas north of the volcano are being evacuated.

Bárðarbunga is buried beneath a glacier that averages 1300 feet thick––for now, at least. To find out what might happen if the volcano blows, we talked to Benjamin Edwards, a geologist at Dickinson College in Pennsylvania. Edwards studies what happens when lava meets water and ice. “I’ve been about as close as you can get without getting hurt,” he says. He’s visited erupting volcanoes in Russia. He’s felt steam hissing into his face from lava cooling on ice, and he’s gotten splattered with lava when mixing it with water.

Up close, he says, mixing lava and ice looks like this:

But that’s when lava is poured ever-so-gently on top of snow and ice. What about when it’s blasting out from below?

Will the eruption simply explode through the glacier?

Um, unlikely. Considering the area of the volcano is about 27 square miles, and if all of that is covered by 1300 feet of ice, and each cubic foot of ice weighs 62.4 pounds … then the weight of the glacier over Bárðarbunga is approximately 60,000,000,000,000 pounds.** **”A few people have made theoretical predictions about the dike fracturing up into the ice for some distance, on the order of hundreds of meters,” says Edwards, “but it seems a low probability that it could fracture all the way to the top of the ice within a few seconds.”

Could the eruption melt through the glacier?

Yes, depending on how much lava flows out. It’s theoretically possible for one cubic yard of lava to melt up to 10 to 14 cubic yards of ice. However, when lava cools quickly––like, for instance, when it’s hitting up against a glacier–– it doesn’t release nearly as much heat as it does when it cools slowly. Under fast-cooling conditions, a cubic yard of lava could realistically melt five to seven cubic yards of ice, says Edwards. The last time there was a big eruption under ice, it occurred at the volcano Grímsvötn (which is not far from Bárðarbunga) in 1996, and it burned through about 2000 feet of ice.

“If the eruption does make it through the ice, it will likely continue to have some explosions, which could break up some ice and shoot it into the air,” says Edwards. “There’s lots of evidence for volcano avalanches having a mixture of ice bits and lava from places like Redoubt volcano in Alaska.”

How fast would it melt the glacier?

Well, that depends on what type of lava comes out, says Edwards. Sometimes the volcanic effluent flows out in lava tubes that are about 3 feet thick and 20 to 30 feet long. These release heat slowly, and often cause lakes to form in the middle of a glacier. On the other hand, if the volcanic material spews out in small chunks, that has the potential to melt through the ice faster. “The little pieces cool quickly, but they also heat things up more quickly,” says Edwards. “With lava tubes, a lot of the heat stays trapped inside and comes out more slowly.” The Grímsvötn eruption, which was more like the explosive kind, melted 2000 feet of ice in about 30 hours, causing a gigantic flood.

What happens after the lava melts through the glacier?

You might think that lava on top of ice might cool down quickly before it could flow very far. You would in fact be wrong. In lab experiments, Edwards and his colleagues found that lava actually moves faster when it’s on top of ice, probably because some of the meltwater creates an insulating layer that helps the lava to slip around. And in a real world situation, an eruption covered the ice with ash. “The ash will slow down the melting and the lava may not ‘know’ it is traveling over ice for several hours,” says Edwards.

How does being under a glacier affect the amount of ash?

This is a crucial question, since Iceland is worried that another big ash cloud could shut down air traffic again. But it’s a question scientists are still trying to answer. There are two opposing camps: One theory is that when lava hits ice, the steamy explosions that result break the ash into smaller bits. Smaller bits can travel farther in the air, which is bad news for airlines.

The other line of thinking is that when lava hits ice, it generates a lot of steam, which condenses on the ash particles and makes them stick together, creating heavier aggregates that wouldn’t be able to fly very far.

“The jury is still out on which one of these forces is most important,” says Edwards.

The amount of ash produced in the first place is dependent on the type of lava. Basaltic lava flows are fluid, whereas thicker lava is more explosive and tends to be more ashy. Iceland sees both types of lava, so the question remains up in the air (no pun intended).

If the lava stays contained within the ice, the biggest hazards will be local flooding. (These volcano-triggered glacial floods are called jökulhlaups.) But if the lava punches through the ice it’ll generate ash. “Then it will be a matter of, ‘Where is the jet stream right now?'” Edwards says. When Eyjafjallajökull blew in 2010, it spewed ash directly into the strong winds of the jet stream, which happened to be headed southeast towards Europe, and that’s why it caused so much damage. Conversely, a 2011 eruption didn’t have much of an impact on worldwide air travel because the winds blew the ash northwards toward the Arctic Circle. At the time of this article, the jet stream over Iceland was heading south/southeast, which means that if the volcano were to erupt today, an ash cloud would head straight for the U.K. and northwest Europe. But the wind direction could change over the coming days and weeks.

Can the recent Eyjafjallajökull eruption teach us what to expect this time?

Nobody will really know the answer to that until Bárðarbunga actually erupts, if it does happen. But there are a couple of striking similarities so far. The 2010 eruption actually began as seismic activity centered around two separate areas (which is what scientists are observing this week near Bárðarbunga). After a couple of weeks, the center of activity moved up under the volcano which, like Bárðarbunga, was buried beneath a glacier.

Ask Us Anything
future of the environment
iceland
volcanos