April 1956: Preserve Your Meat and Produce With Atomic Radiation

This article originally appeared in the April 1956 issue of Popular Science. You can explore more of our archives–stretching back... 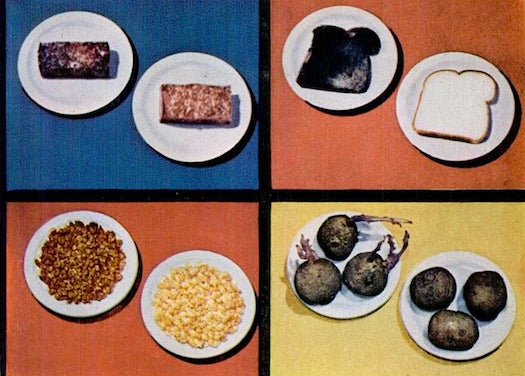 This article originally appeared in the April 1956 issue of Popular Science. You can explore more of our archives–stretching back 140 years–here.

“Put that hamburger back in the refrigerator before it spoils,” my wife advised. “What’re you doing, dreaming?”

She had me there. After looking into something called radiation sterilization, I was absent-mindedly living in a world that we may all inhabit soon. It’s one in which meat no longer spoils in a day or a week, bread won’t mold, and fresh fruit and vegetables stay fresh.

That’s what’s coming in atomic energy, they tell me. You take a pork chop, or a bunch of asparagus, and expose it for a few minutes or seconds to atomic radiation. It could be gamma rays from a reactor’s spent fuel rods, or an electron beam from a high-voltage machine. The rays kill bacteria, mold, every living thing that makes food decay. So then, I told the wife, your pork chop and asparagus don’t spoil.

“Hey, that sounds handy,” she said. “I could buy fresh meat and vegetables for weeks ahead and not worry about their keeping.”

“Nice for camping trips, too,” I added. “Take along a steak and chicken for a week or two, and you won’t need six iceboxes.”

“Is this really going to happen, or is it just somebody’s wild pipe dream?”

“What’s this got to do with defense?”

“Suppose trouble starts, like Korea, and the GIs move in. Way it’s been, they live for months on canned rations, until refrigeration ships catch up with them, and mobile refrigerators can be dragged ashore. This way they’ll get fresh eats wherever they go.

“The Navy is for irradiated food because it will actually boost their warships’ cruising range. Carriers and cruisers won’t need to stop and take aboard perishable food so often. That will count all the more with atomic-powered ships that would have practically unlimited range otherwise.

“The Armed Forces together buy nearly two billion dollars’ worth of perishables a year, 2,750,000,000 pounds of fresh meath alone. Keeping just one fighting man’s share of it refrigerated, they figure, costs $40 a year. If irradiated food can save as little as a fourth of that, it will cut the cost of feeding a 2,000,000-man army by a tidy $20,000,000 yearly. So, all ’round, it looks like a potent new atomic weapon.”

“But will it all be a military secret, then, like atom bombs?”

“No, sire. Everything about this irradiated-food business is absolutely non-secret. All the packers and canners, everybody who makes our eatables, will be encouraged to use the processes that they are working out.”

“The idea’s being developed by the Army Quartermaster Corps’ Food and Container Institute in Chicago. Teamed up with is is some of the top U.S. talent–about 40 groups of researchers in universities, foundations and private industry, plus key Government agencies like the Atomic Energy Commission.” 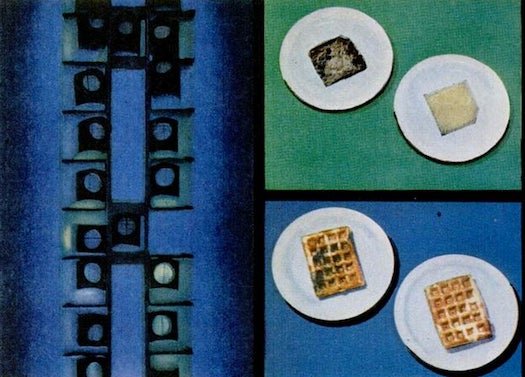 (Left) A gamma-ray source for fuel rods used in irradiating food. (Right) Foods with and without preservation via atomic radiation.

Here are the highlights of what they’ve done so far and with what success:

As Exhibit A you can see for yourself, in color photos, the results of some food-irradiating trials. Five different foods were kept for weeks or months at room temperature, without visible deterioration, after getting doses of radiation shown. Irradiating potatoes, to keep them sprouting while they are in storage, was another twist in the process.

The pictures don’t mean that each and every one of these irradiated items would pass the dinner-table test.

“Cold sterilization” with radiation contrasts with cooking food an hour or more, at 240 degrees F., in conventional canning. Eliminating this destructive heat sterilization should help preserve fresh foods’ flavor and texture. However, radiation itself in large amounts can affect some foods’ flavors.

The spectacular sort of thing, making “perishables” keep outside an icebox, calls for total sterilization–killing every last microorganism in the food. That takes a whammy of a couple of million roentgens of radiation. Since 400 to 500 roentgens kill an average man, you can see how tough those babies are.

Flavors of a lot of foods stand up nicely to even a two-million-roentgen jolt, the researchers find. On this list of most-promising items for irradiation they put bacon, chicken, pork, beef liver, codfish cakes. green beans, broccoli, asparagus, carrots, waffles; and there are several more.

Other foods, “radiation-sensitive,” can’t take all those roentgens. Milk, a horrible example, gets a burnt taste. “Off” flavors or odors likewise make cheese, frankfurters, and orange and lemon juice unsuitable for total sterilization.

Whether or not they eventually succeed in totally sterilizing a beefsteak, they see early and interesting possibilities short of that.

Plans are nearing realization to give meat, fish and vegetables a “pasteurizing” dose of 50,000 to 1,000,000 roentgens of radiation. This wouldn’t be enough to affect the food’s flavor, or totally sterilize it either, but it would knock off the bacteria that were on the surface.

Then a piece of meat would keep, in a refrigerator, five or 10 times as long as usual. There’s a chance that meat irradiated this way may be on the market before the year is out.

Irradiation may also be linked with other processes. Natural enzymes of meat and vegetables adversely affect a few foods’ keeping qualities. While the enzymes are immune to radiation, a supplementary treatment–mild heat or blanching–inactivates them.

Irradiated foods may be sold in heat-sealed bags of polyethylene plastic, ray-treated right through the bags. No doubt they’ll also be put up in cans, and any other containers that can be hermetically sealed to keep bacteria out. 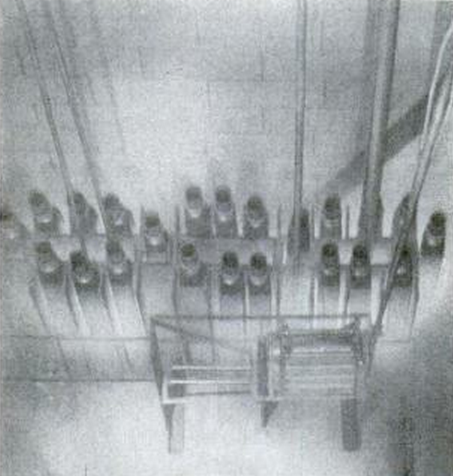 Revolving rack holding food in cans is lowered beside assembly.

Which source of radiation will out, no one knows yet–they’re trying them all.

Trials have used deep-penetrating gamma rays from reactors’ uranium-fuel rods, from radioactive cobalt and from waste fission products, the “ashes” or atomic furnaces. Now the Department of Defense, with AEC help, is building a special atomic reactor to irradiate food. You can’t do it with existing reactors because their neutrons could make the food radioactive; but there are several ways to design a new one that will expose food to gamma rays only. Neither these, nor electrons of not-too-high energy, induce radioactivity in food.

Electron beams penetrate less deeply than gamma rays, but have points in their favor. You can turn them off at day’s end, or to make repairs–something you can’t do with radioactive sources–and less shielding is needed for protection. They come from a million-volt General Electric machine called a resonant transformer; from others with such names as Van de Graaf, Capacitron, Genetron. A relatively new concern, applied Radiation Corp. of Walnut Creek, Calif., has come up with an interesting called a linear accelerator. Recently Arco completed one that will fit right into a regular processing plant, where heat is used now, for a Rockford, Ill., maker of food-processing machinery. It can totally sterilize two tons of food an hour, or pasteurize from 20 tons to several hundred hourly.

The Defense Department itself plans a 1,000-ton-a-month food-irradiating plant by 1958–a pilot-scale prototype for commercial ones. the idea is that near to becoming big-time.

The green light for such projects will be approval of irradiated food by the Pure Food and Drug Administration. First it must be absolutely satisfied that no hazard, known or unknown, lurks in food exposed to radiation. To that end, the experimenters have fed irradiated food to mice, rats, chicken, dogs and monkeys. All thrived. Now volunteer human subjects have been living on irradiated-food diets for nearly a year. To date, the reports are favorable, with the final ones due soon.