Help your skin heal with these tips from a dermatologist. 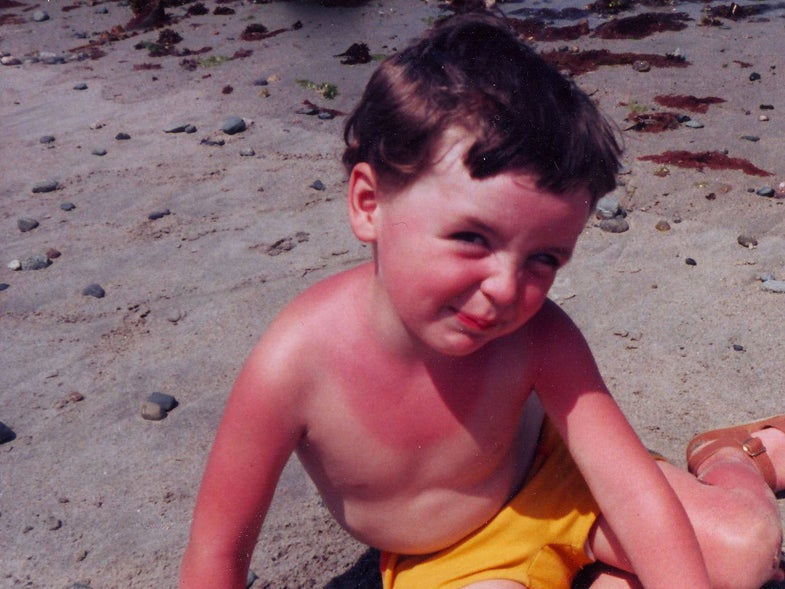 We've all been there. Moisturizers and cool water will help. Wikimedia Commons
SHARE

To treat a sunburn, the very best thing you can do is prevent yourself from getting one in the first place. Wear protective clothing, don’t stay out in the light for too long, slather on gobs of sunscreen (far more than you think you should), and reapply often.

Still, even with the best intentions, many of us, especially the pale folks among us, end up with that dreaded lobster look. In consequence, the market offers tons of treatments for sunburn relief—and equally as many old wives’ sunburn remedies claim that they provide the best treatment for sunburn. But the scientific answer is surprisingly simple: Just cool and moisturize your burned skin.

A sunburn happens when the sun’s ultraviolet radiation damages the DNA inside skin cells. As a result, those cells die in a process known as apoptosis. This excessive damage and death prompts the immune system to release a flood of inflammatory proteins and blood to the area. In the process, the outer skin becomes hot, irritated, and red.

Sunburns can be hard to notice right away. They often show up hours after sun exposure, which makes them difficult to recognize before they get worse. But if you are out in the sun for an extended period of time, checking your skin once in a while could stop a burn in its tracks.

If you notice your skin starting to change color, head straight for a shaded area, suggests Meghan Feely, a board-certified dermatologist in New York. Likewise, if you find yourself burnt after a long day in the sun, then don’t head back outside until it’s dark.

How to get rid of a sunburn fast

Just like a burn from a hot beverage or plate, one from the sun’s rays traps warmth in the skin. So the first big step to treating a sunburn is to release that heat. Feely recommends applying a cool compress for 15 minute intervals throughout the rest of that day or taking a cool shower.

If the burn is really bad, blisters might also appear over the following hours or days. This is a characteristic of a second-degree sunburn. “Do not pop the blisters, as these aid in skin healing,” says Feely. Letting them recover naturally will help you avoid any infections. To prevent yourself from accidentally popping them, try taking a cool bath rather than a shower. If they’re particularly painful, you might feel better after taking an over-the-counter medication like ibuprofen or aspirin or applying a topical corticosteroid like hydrocortisone.

After showering or bathing, it’s important not to pat the skin completely dry, says Feely. A sunburn can dehydrate your outer layer, and leaving some water in place allows your epidermis to reabsorb some of that lost H2O.

While the skin is still damp, apply a moisturizer to further trap that water so your cells can reabsorb it. There are countless products on the market, and some even claim to specifically care for burned skin. Feely says that any moisturizers that contain vitamins C and E will work best. These have antioxidants that help the skin heal, minimizing the amount of flaking that will ensue.

Moisturizers containing aloe vera—or even just a gel form of the plant’s juice—are often touted as the very best thing for a sunburn. Feely says aloe is commonly used to heal and hydrate skin and decrease inflammation, and it contains certain skin-healing proteins that can help prevent infection.

However, the superior sunburn-healing benefit of aloe vera versus another moisturizer isn’t completely clear. Some studies show that it does provide a statistically significant advantage. But other research doesn’t demonstrate this same boost. Ultimately, very few large-scale studies of sunburn treatments include a comparison between aloe vera and a placebo.

While many moisturizers—especially ones with vitamins E and C—will work just fine, Feely says you should avoid certain products. Anything that contains the medications lidocaine or benzocaine will irritate the skin, which will lengthen the healing process. Meanwhile, petroleum-based options like Vaseline will trap heat, making it far more difficult to release.

How long do sunburns last?

The length of time it takes for your skin to rebound from a sunburn varies. “Depending on the severity, the redness can persist anywhere from a few days to weeks,” says Feely. As time goes on, you can also expect bad burns to result in peeling skin. And while (for some at least) nothing is more satisfying than gently lifting away a ginormous layer of skin without breaking it, that satisfaction doesn’t outweigh the detriment to the skin. Do not pull on your peeling skin. In fact, try wearing loose-fitting clothing in the days following a sunburn to prevent the fabric from rubbing and irritating the already-sensitive area.

Even after the sunburn goes away, you might see lasting effects on your skin, such as fine lines, wrinkles, or solar lentigines, colloquially known as sunspots. All these markings more commonly develop after repeated exposure to the sun. If you notice these changes, applying a topical retinoid (a class of chemical compounds derived from vitamin A) like Retin-A could help, Feely says. This type of ointment remodels the skin’s collagen and blocks the production of the skin pigment melanin, which helps make sunspots fade.

Offense is the best defense

Preventing a sunburn is always better than nursing your skin back to health. Plus, says Feely, sunburns increase your risk for skin cancer, and ones that blister double that increased risk.

If you plan to stay out in the sun for an extended period of time, Feely recommends that you bolster your sunscreen with good clothing choices. For example, synthetic fabrics like polyester or nylon provide far more UV protection than cotton. “Linen absorbs ultraviolet light, whereas synthetic fabrics such as rayon reflect it,” she says.

So go out and enjoy the sun—but don’t forget to protect your skin.