Scientists are putting the X factor back in X-rays

Medical imaging will be revolutionized by extreme light, artificial intelligence, and more. 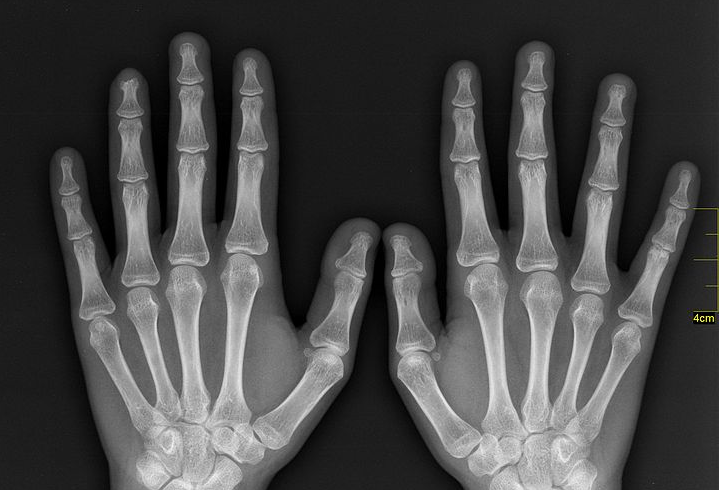 It started with an accident, as the most exciting discoveries often do.

In late 1895, German physicist Wilhelm Rӧntgen was testing equipment in his lab under a black cardboard covering. While experimenting on known forms of light, he witnessed a fluorescent light that behaved like nothing anyone had ever seen before. It not only moved through the cardboard—it traveled an additional nine feet.

These new beams, which Rӧntgen named “X-rays,” (“X” being a mathematician’s standard substitution for all things unknown) actually penetrated a plethora of common substances, from cardboard to soft tissue. But these mysterious pulses suddenly stopped when they hit bone or metal.

The discovery inspired both horror and hope. Legend has it that upon seeing an X-ray reproduction of her own hand, all bone and metal wedding ring, Rӧntgen’s wife Anna Bertha said, “I have seen my death!” and never returned to the lab. But the medical industry saw in the X-ray a boundless therapeutic potential.

While the technology has grown ever-more precise, the fundamental principle of harnessing X-rays to produce images for human analysis has largely stayed the same. But experts say we could be on the precipice of a new medical imaging revolution, one that puts the X factor back in the X-ray.

Today, basic imaging to create Rӧntgen-like visualizations, which let us peer beneath skin without a scalpel, are offered by every doctor, dentist, and orthodontist in the country. But X-rays have taken on countless new forms in the last 120-odd years since Anna Bertha marveled at her own hand. It didn’t take long for technicians to realize, with a little effort, that the X-ray could show more than just hard substances like bone. For example, by filling a patient with the chemical element barium, doctors were able to visualize the soft tissues of the gastrointestinal tract.

By the 1950s, anigography was a common method of evaluating blockages in the cardiovascular system. Similar to a barium swallow test, doctors can inject a patient’s veins with a contrasting agent like iodine dye, hit them with an X-ray, and create spidery images of a patient’s blood vessels. While barium illuminated the gastrointestinal tract, angiograms are useful for analysis and treatment of clots and other disorders.

Perhaps the most important development came in the 1970s, with the first X-ray computed tomography machine, or CT scan. Using sensors to detect the output of X-rays beamed through the patient’s body, the machine creates elaborate images of bones, organs, and soft tissue all at once. Because each substance in the body is penetrated by the beam to a different degree, the machine can successfully distinguish between an arm and a spleen, and carefully recreate an impression of both. “That’s the most modern application of X-ray technology,” Banerjee says.

For all the potential of the X-ray, Anna Bertha’s purported fright was hardly misplaced. Early X-rays were weak, requiring a exposure time of 15 or 20 minutes just to generate an image of a hand, according to Banerjee. As a result, they easily caused burns, which could do harm in more ways than one. Thomas Edison’s X-ray research assistant Clarence Dally was exposed to radiation so frequently that he developed metastatic skin cancer, which killed him by age 39. “I did not want to know anything more about X-rays,” Edison said at the time of Dally’s death.

Since the early 1900s, researchers have looked for ways to curb the resulting radiation. They made progress on many fronts, from protective clothing like the heavy metal bibs you don at the dentist’s office, to the move from conventional X-ray film to digital X-rays, which require less radiation to produce an image. But the biggest advances—called tube current modulation and iterative reconstruction, respectively—have only risen to promise in the last decade or so, says Bibb Allen, the chief medical officer for the American College of Radiology‘s Data Science Institute.

Tube current modulation, in the context of a CT scan, means the dose of the radiation is varied according to the part of the body under review. In a full-body scan, more radiation will be sent to the rock-hard skull than the airy lungs, according to Allen, thereby managing overall exposure to the beams. Iterative reconstruction, meanwhile, is the process by which an algorithm in the CT scanner pieces together high-quality images of the body. By reducing noise and clearing up the image, patients can spend less time in the donut-shaped CT machine, being bombarded with X-rays and resulting radiation.

The process of producing a medical radiograph looks much the same as it did when the X-ray was first discovered. X-rays are generated, and the resulting beams are pointed at a human target; the images created from this process are analyzed by other humans. But what about the X-rays of the future?

Donald Umstadter is a physics professor at the University of Nebraska’s Extreme Light Laboratory. He’s the head of a research team that built, maintains, and uses the Diocles laser, a man-made contraption that generates a beam 10 million times brighter than the sun. “We’ve already discovered something new, something that had never been seen before in the laboratory,” says Umstadter. And, he adds, it has the potential to change radiographic imaging.

When Umstadter’s team focused the Diocles Laser on an electron beam, they were able to create something called multi-photon scattering.“Not only is this a new behavior of light… but it’s also a new way to make X-rays, so essentially it’s a new way to make light,” Umstadter says. The laser still generates an X-ray like the ones Rӧntgen made in his lab; it just does it by different means. “It turns out the X-rays we produce actually deposit 100 times lower dose than a conventional X-ray machine and so they’re much safer,” he says. If the Diocles can one day be built to scale—made to fit in a hospital, or even a dentist’s office—it could be a boon to both patient and physician safety.

Banerjee and Allen, both accomplished radiologists, have focused their sights on the potential for artificial intelligence to interpret X-ray results using machine learning. AI is already performing well at diagnostic tasks, at least in limited settings. In 2017, researchers at Stanford showed that their algorithm could diagnose pneumonia from a chest X-ray “better than [human] radiologists,” according to a press release from the university. Earlier this year, the FDA approved a device that uses artificial intelligence to screen patient’s eyes for diabetic retinopathy. General practitioners might soon be able to diagnose this condition in their patients without sending them to an ophthalmologist for an expert evaluation.

While it may be a ways off, Allen says, “I am excited about the day where artificial intelligence will see something in an image that we humans cannot see.”