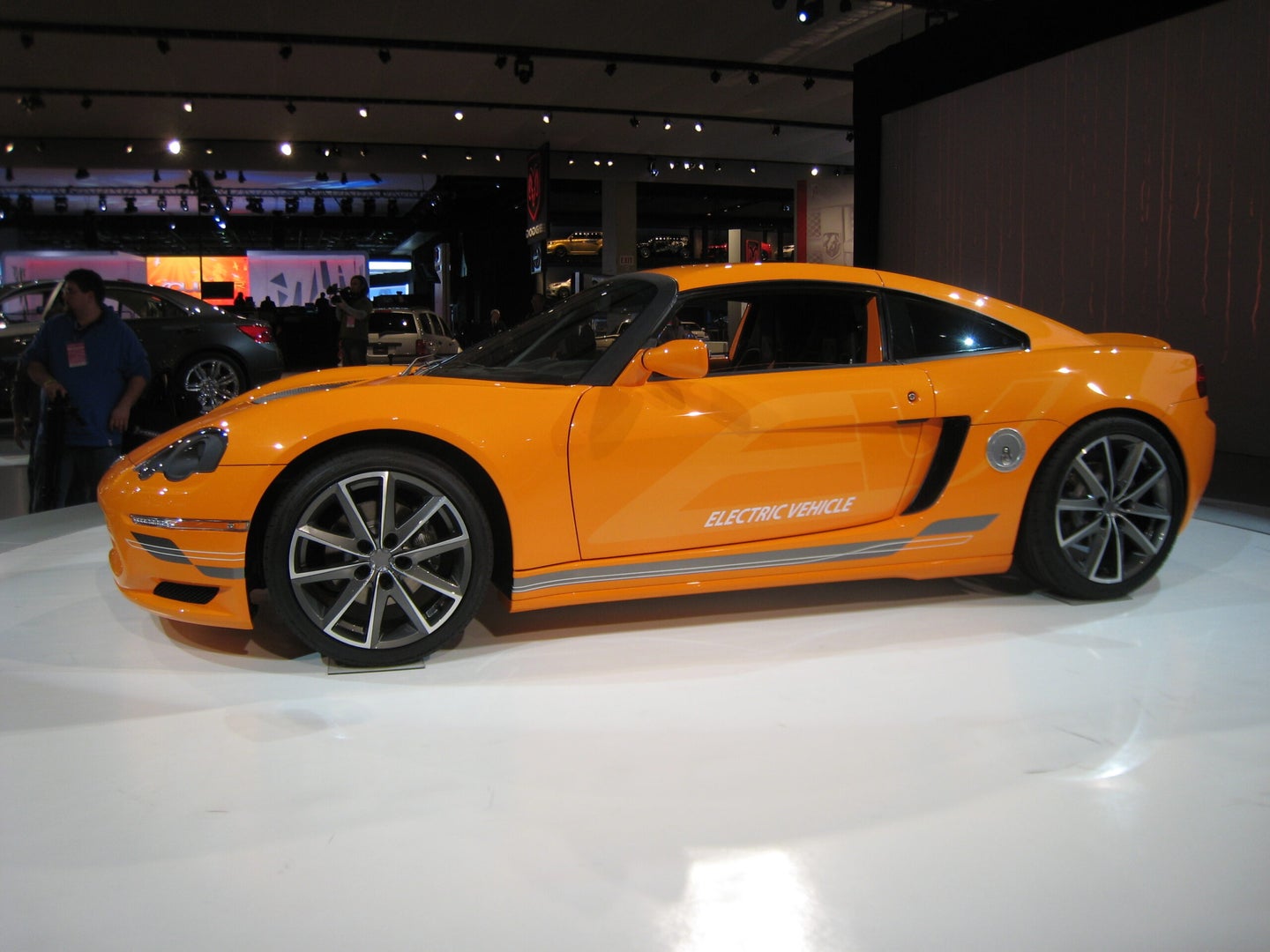 Two months ago, it was far from clear whether Detroit’s Big 3 carmakers would even exist by the time their hometown auto show rolled around. Thanks to government funds they made it—and as a result, much of the Detroit show seemed to be a performance for Washington; an elaborate sales pitch for the continued relevance and potential solvency of the American auto industry. Hybrids, plug-ins, and pure electric cars, both real and vaporous, were central to that pitch. Meanwhile, Nissan, Infiniti, Porsche and Ferrari skipped town, and boutique electric-car makers Fisker and Tesla and the Chinese automakers BYD and Brilliance staked out sizable plots on the main showroom floor. Here‘s a selection of highlights.

Please click here to launch a gallery of the hottest cars at this year’s Detroit auto show. 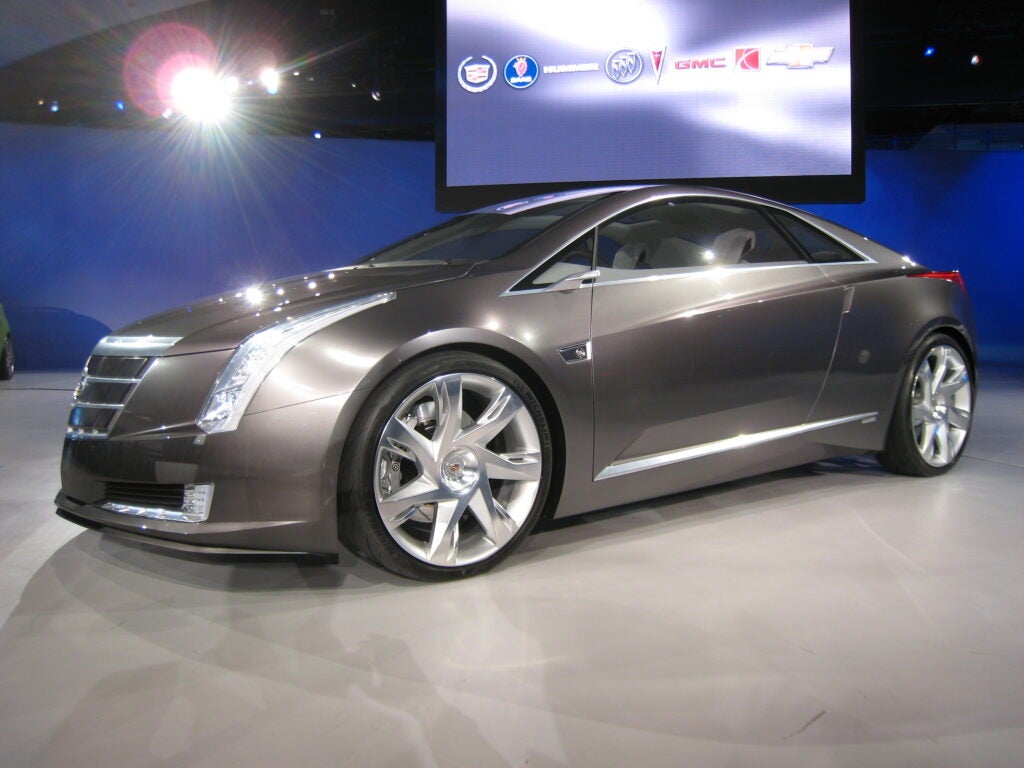 At a Sunday morning event that was more mock political rally than press conference, General Motors trotted out what seemed like their entire vehicle lineup. The highlight, though, was the car you see here— the much hotter sister of the production-intent Chevy Volt, the Cadillac Converj concept. The coupe would run on the same lithium-ion battery/gas engine combo as the Chevy Volt, a system that General Motors now calls Voltec (which, yes, sounds like the name of a Transformer). It’s an extended-range electric system that drives the car 40 miles on electricity before a small gas engine kicks in to generate backup power. The family resemblance to the production Volt suggests that the Converj incorporates at least some of the aerodynamic lessons-learned that led GM to so dramatically revise the original Volt concept. 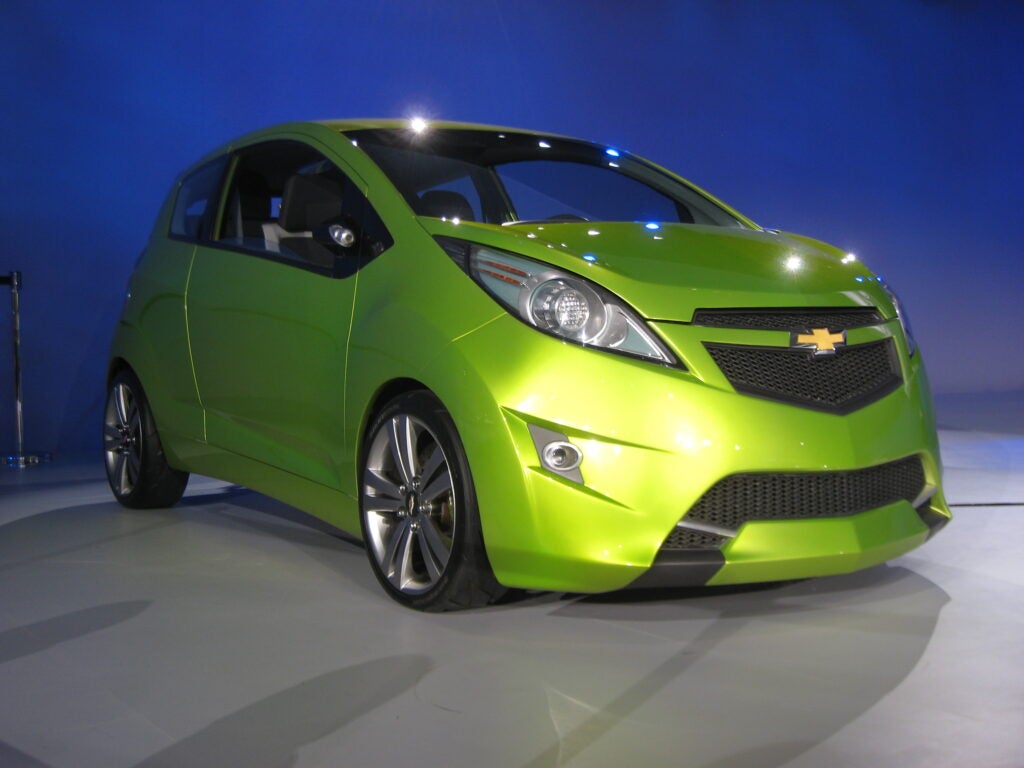 At the same press conference the General also rolled out this tiny four-seater, based on the Chevy Beat concept first unveiled two years ago at the New York auto show. The Beat concept, um, beat two competing designs—the Trax and the Groove—in an online poll, and now the renamed but largely unchanged car, which will run on a four-cylinder gas engine, is on its way toward becoming reality. 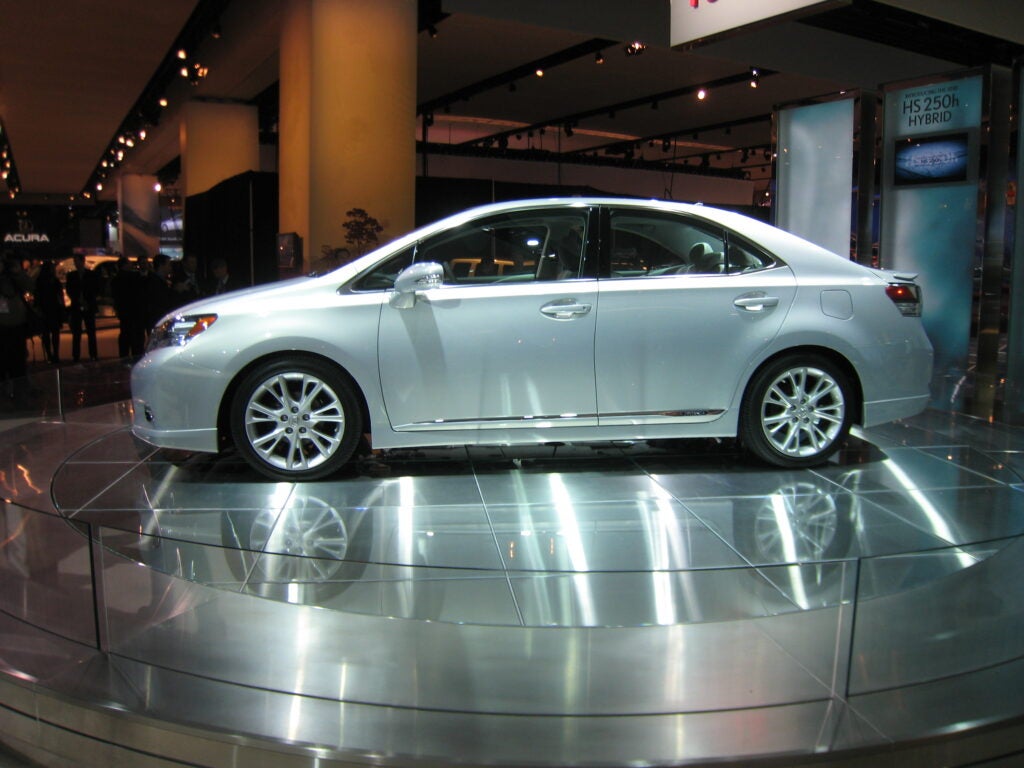 Lexus has taken plenty of heat over the years for making hybrids that use the electric motor to boost performance while leaving fuel economy pretty much unchanged. The HS250h is different. In Sunday’s press conference Lexus group VP Mark Templin said that the HS should have a better combined fuel economy rating than any other luxury car sold in America, and that it should get better mileage around town than the Smart ForTwo. 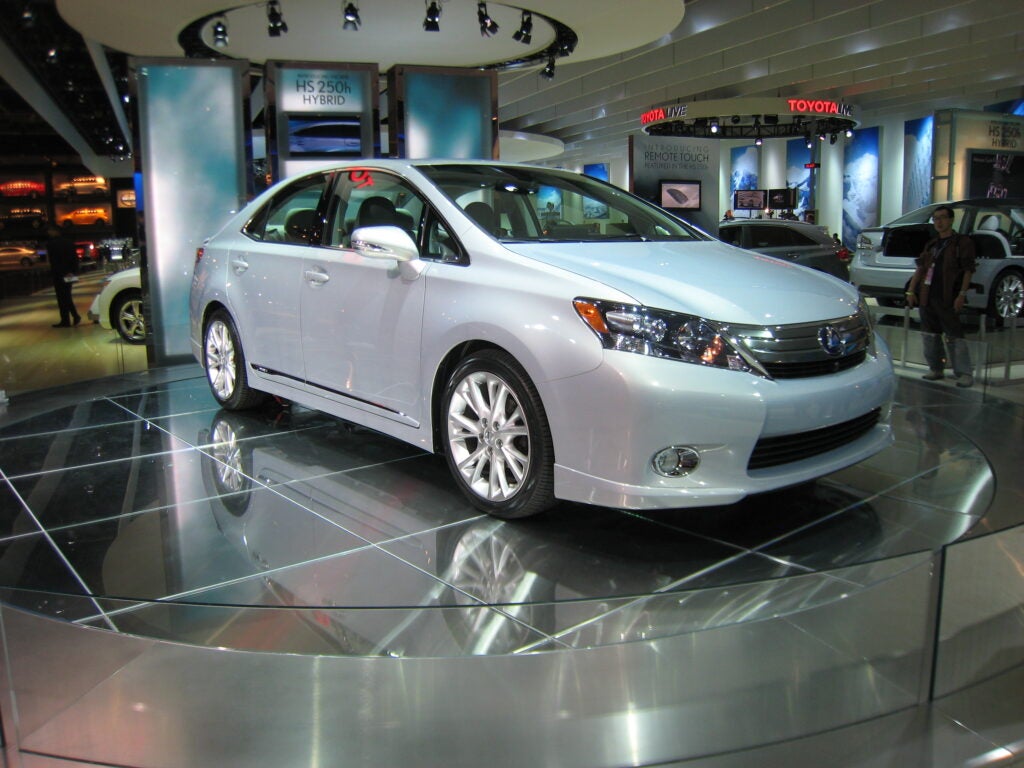 The HS250h is also a dedicated hybrid, meaning it’s not available with any other powertrain. It’ll run on a 187-hp 2.4-liter Atkinson cycle engine, and it’ll feature an exhaust heat-recovery system. The HS250h will also be available with just about every luxury-tastic automotive gizmo around—heads up display, lane-keep assist, voice recognition, pre-collision system, and so on. 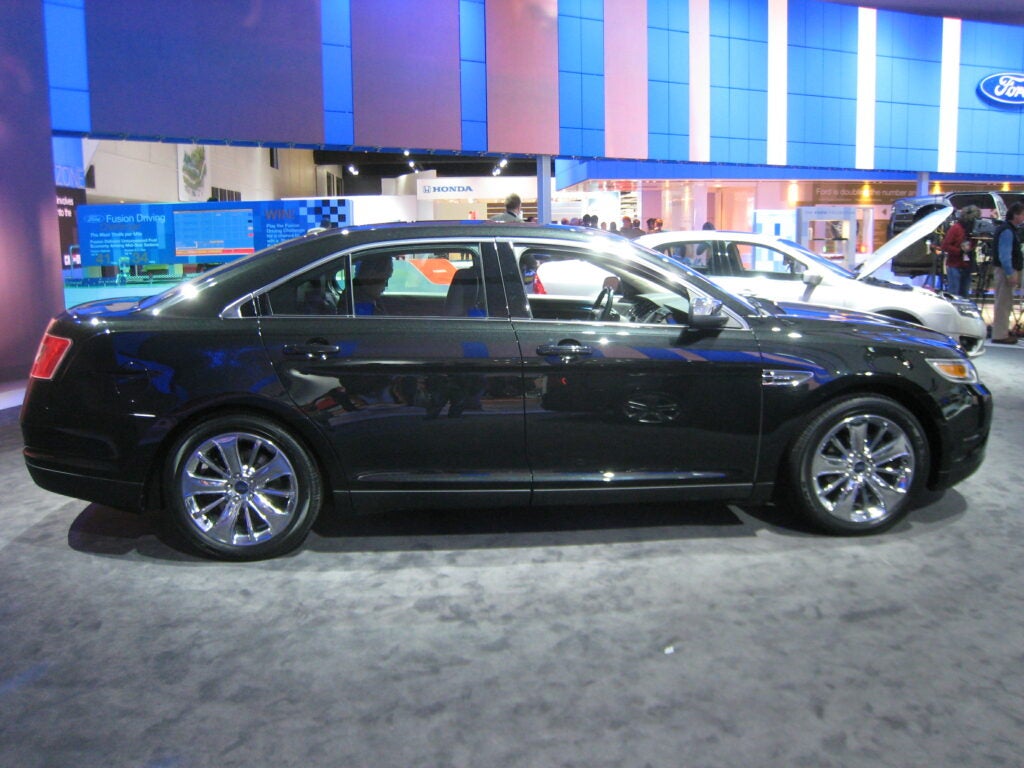 In their omnibus press conference, Ford rolled out recent launches like the impressive Fusion and Fusion Hybrid, the upcoming Fiesta, and more. They announced plans to bring a small battery-electric car to the US by 2011 and a plug-in hybrid a year after that. But the real launches were two big-shouldered gas-powered cars: The 2010 Taurus and the 2010 Shelby GT500. Starting at just under $26,000, the new Taurus will come standard with a Duratec 3.5-liter V-6 that makes 263 horsepower. A vast array of tricked-out electronics—adaptive cruise control, collision warning, SecuriCode keyless entry, automatic high beams and rain-sensing wipers, and a blind-spot warning system—will push the modest Taurus upscale. 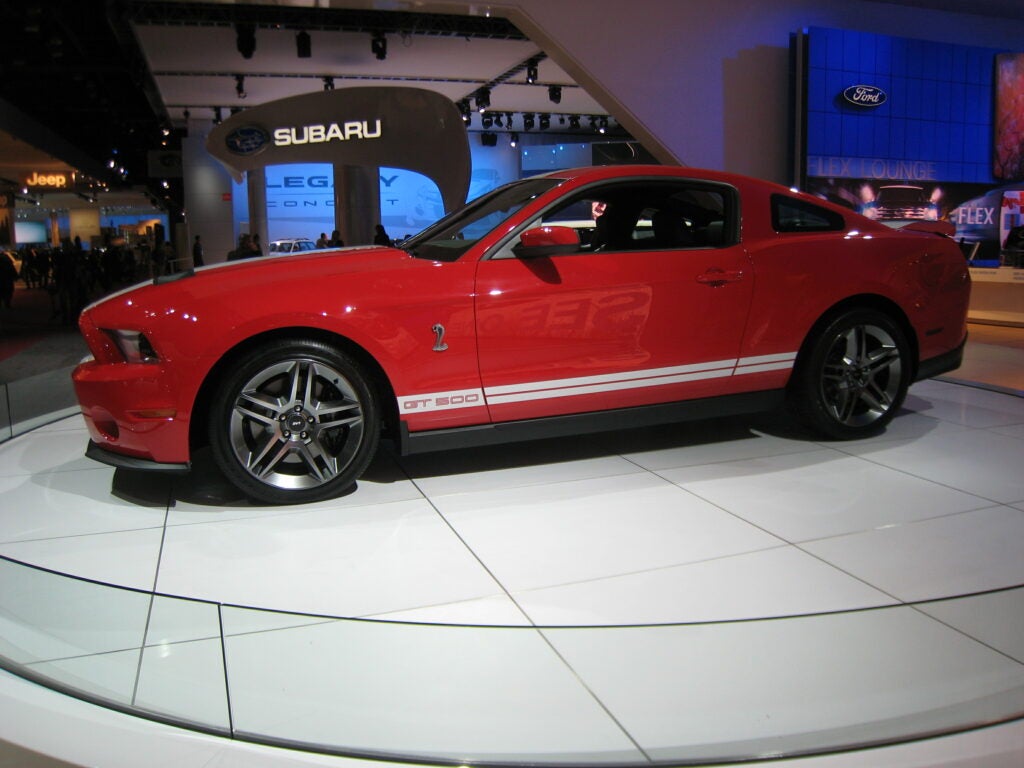 Carroll Shelby was in the building—on his 86th birthday—to help introduce the monstrous GT500, which runs on a supercharged 5.4-liter dual overhead cam V8 engine that cranks out 540 horsepower. Professional drivers were on hand to perform the obligatory burnouts. 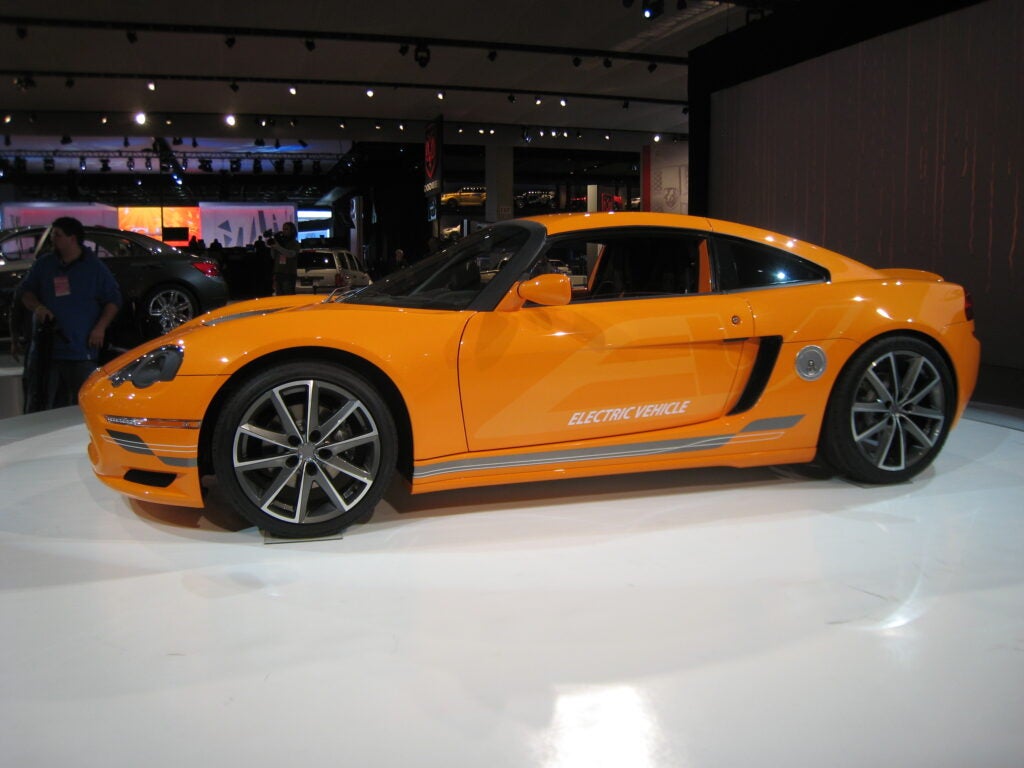 In an awkward press conference, Chrysler vice chairman Jim Press spoke glibly about the massive cost-cutting his company has done over the past year, thanked the Treasury department for billions of dollars of assistance his company has received, expressed high hopes for tapping TARP money going forward, then unveiled a tangerine variation on its Lotus-based electric sports car, now dubbed the Circuit. If it gets built, the lithium-ion battery-powered Circuit will run from 0-6 in less than five seconds, top out at more than 120 mph and run from 150-200 miles on a charge. 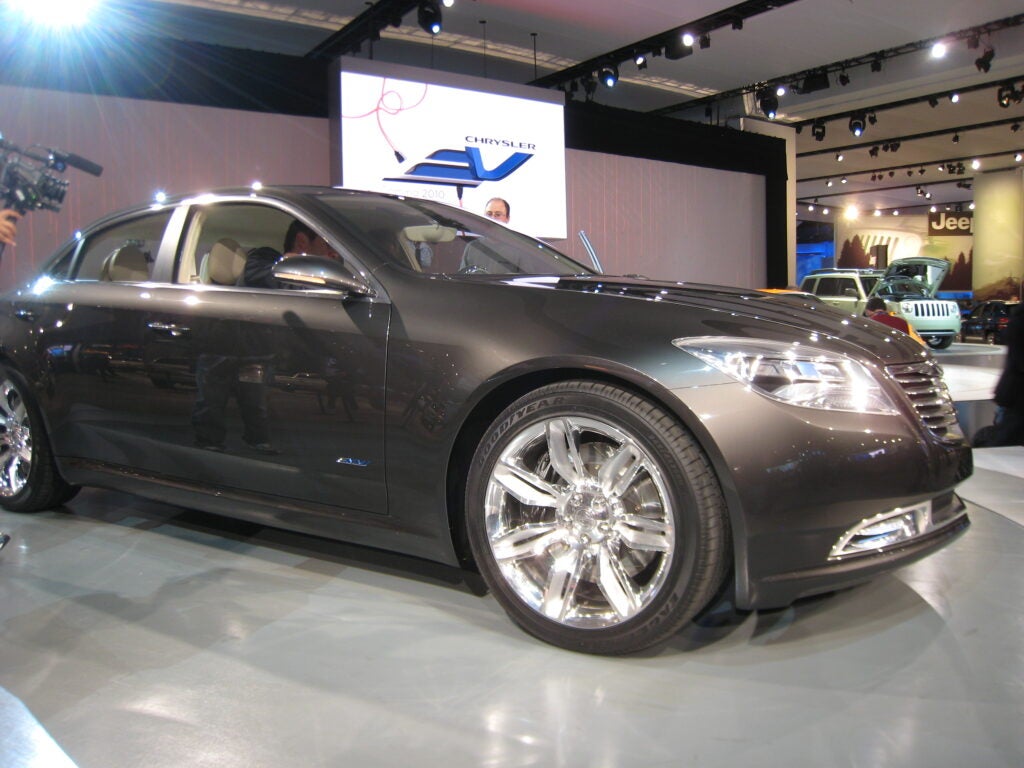 While Chrysler had shown earlier iterations of the Circuit at previous auto shows, the 200c EV concept sedan was a genuine surprise. Maybe it’s a matter of lowered expectations—Chrysler is by far the most troubled of the Detroit automakers, and the rest of its electric-concept lineup seems to basically consist of taking existing vehicles and saying, “Hey, now these are EVs!”‘—but the 200c received a genuinely warm reception from a skeptical audience. 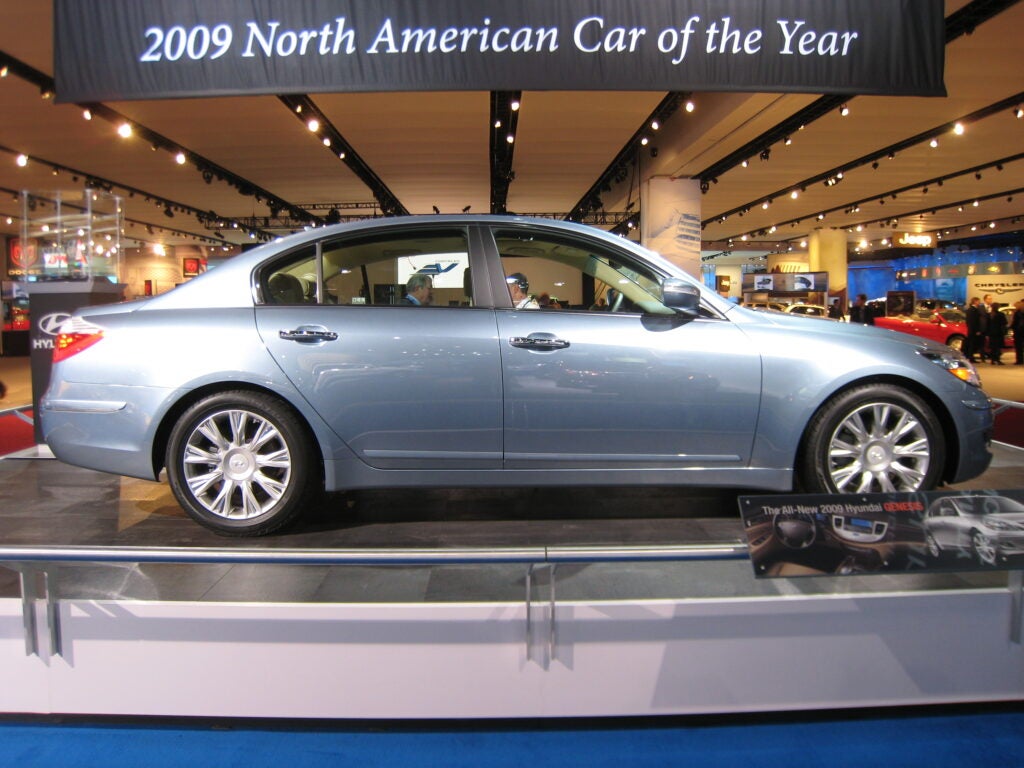 On the first day of the Detroit show, the V-8 powered Hyundai Genesis was awarded North American Car of the Year. To a lot of people, anointing a V-8-powered vehicle car of the year was, at minimum, tone-deaf. Regardless, it’s interesting to consider how far Hyundai has come. They have now arrived. 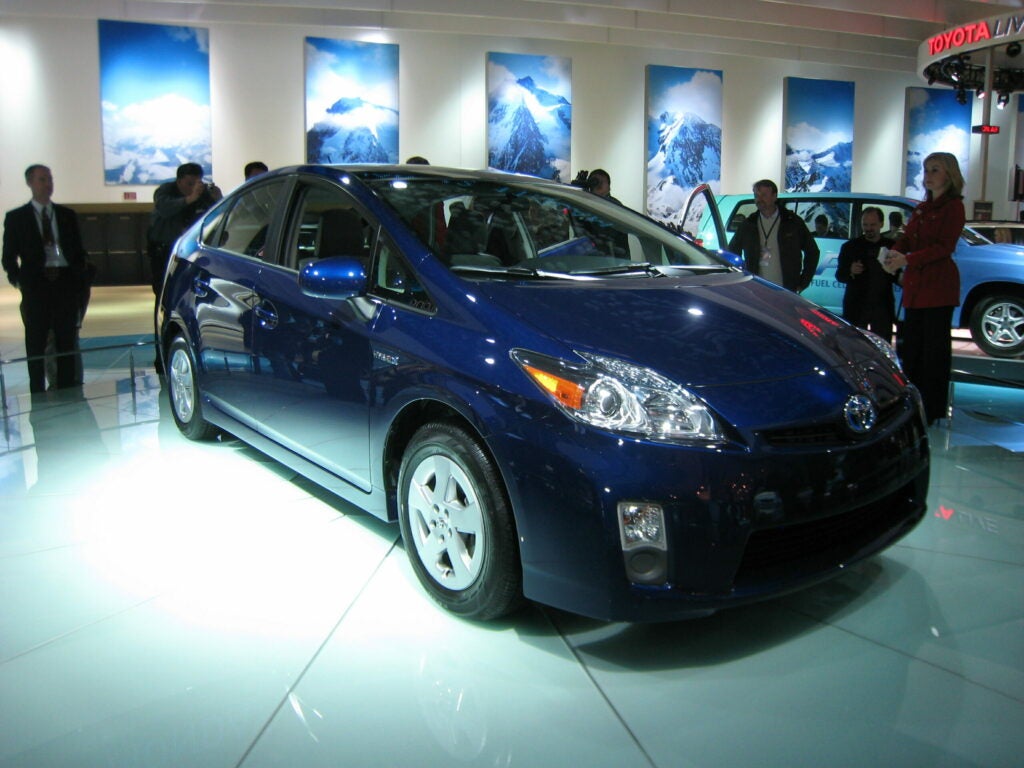 Toyota chose Detroit to deliver the world premiere of the all-new Prius, now in its third generation. In a press conference Monday morning Toyota group vice president Bob Carter said the new Prius would get an estimated combined 50 mpg, up from 41 mpg for the first generation. The car looks essentially the same as the previous generation, but look closely and you’ll find minor tweaks to the corner edges, the roof, and the spoiler. The powertrain, however, has been largely reworked, with a new gas engine and electric motor, inverter, and generator. Another interesting twist: A solar roof now runs a ventilation system that cools the car when it’s parked. 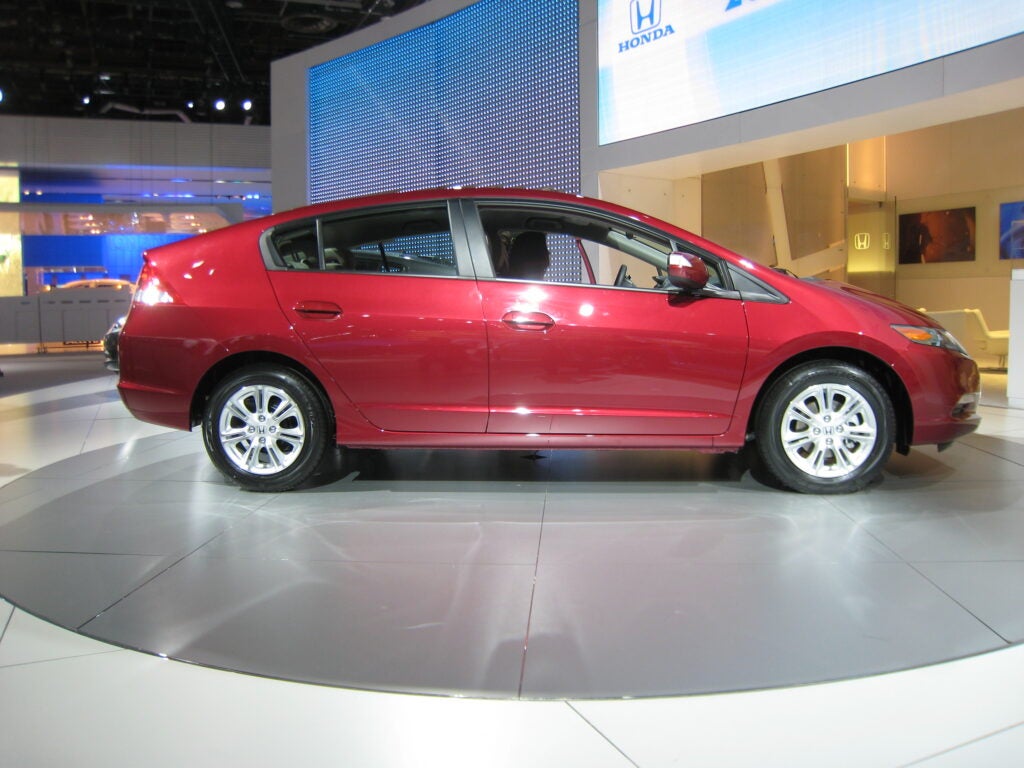 Across the showroom floor from the new Prius stood that car’s closest new competitor: the Honda Insight. The idea behind the Insight is to make hybrid technology affordable for the masses; the hybrid hatchback starts at around $19,000 and, depending on your driving style, gets anywhere from 40 to 60 mpg. Watch this site for PopSci contributing editor Mike Spinelli’s test drive of the Insight, coming soon. 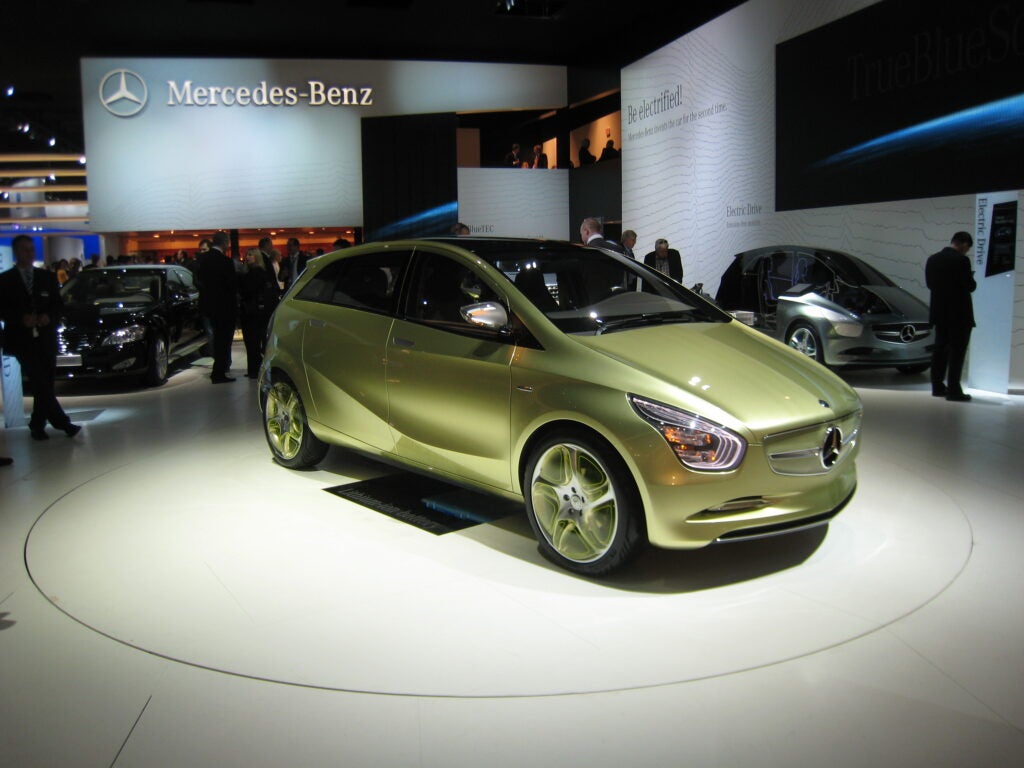 One of the more conceptual concepts at the show was Mercedes’s BlueZERO, a single vehicle architecture that can be fitted with either a pure electric drivetrain, a fuel cell, or a range-extended electric system like the one that will drive the Chevy Volt. 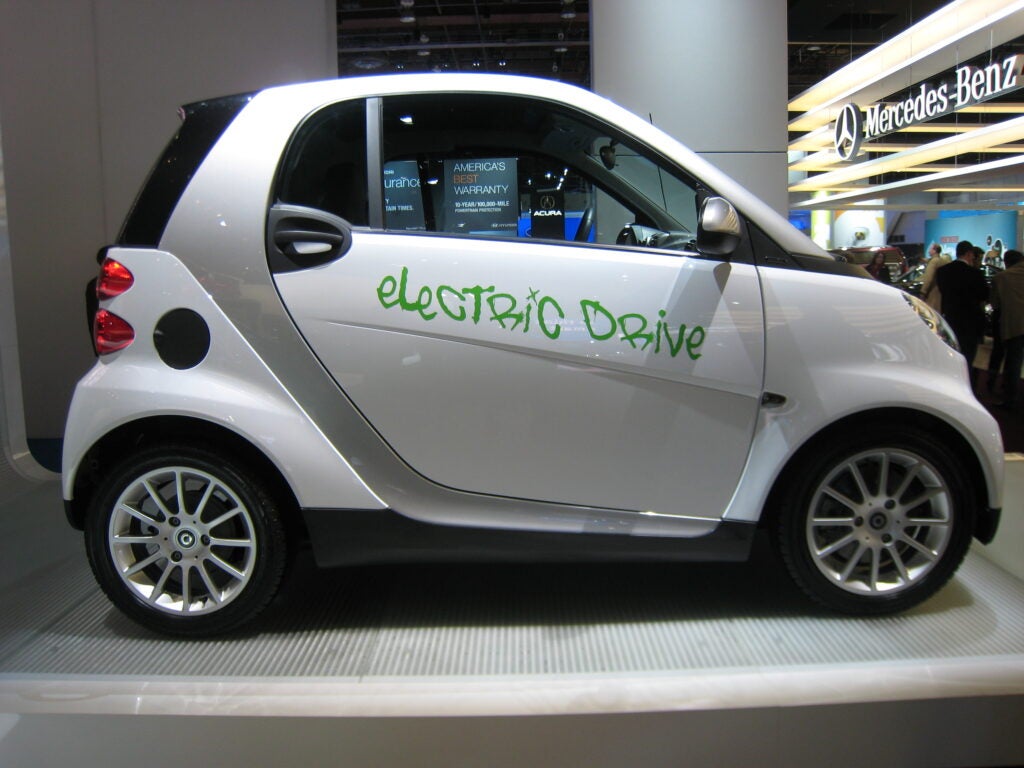 Enthusiasm about the Smart ForTwo softened quite a bit once people realized that at 33 mpg in the city, the car doesn’t deliver the fuel economy you’d expect from something so tiny. Make the Smart all-electric, though, and you’re getting closer to the ideal city car. The electric Smart is coming, if not for a while. Right now the company has 100 electric cars in England, mostly in London. By the end of this year Smart will start bringing lithium-ion powered Smart cars to the US in the usual test-fleet way: You apply for a car, you lease it, then you give it back so they can run diagnostics on it. By 2012, though, electric Smart cars should be available in decent numbers for purchase—and maybe by then garages in New York and Chicago will have outlets for charging the things. 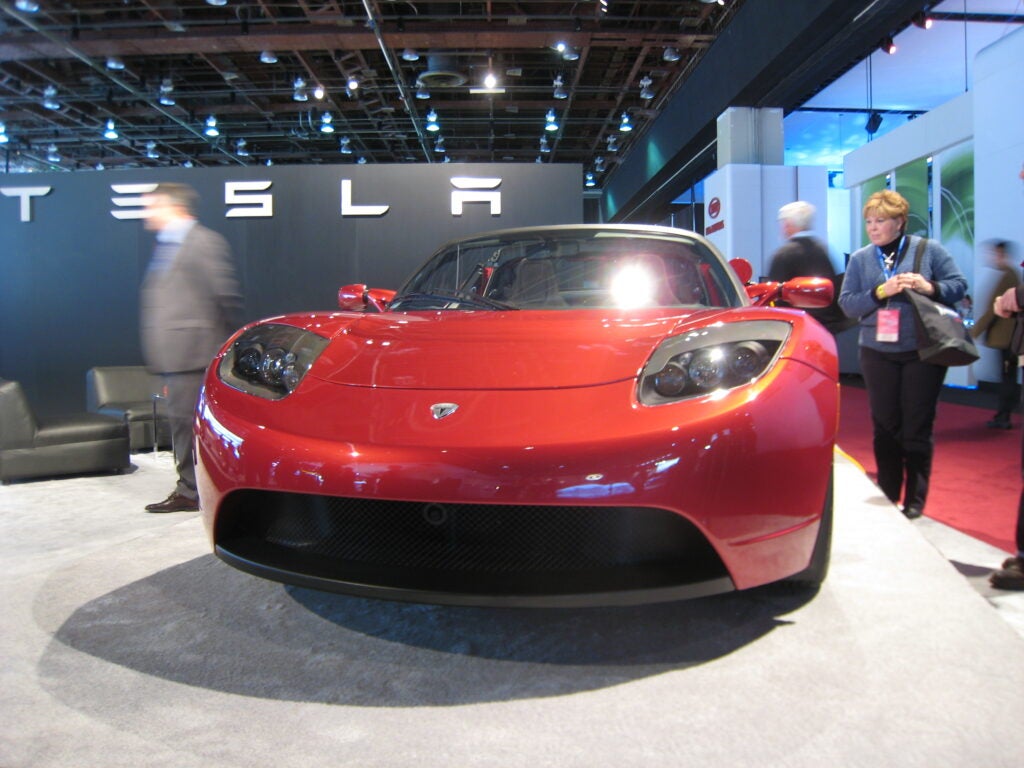 PopSci readers know this car well by now: It’s the Telsa Roadster, the two-seat sports car powered by 6,831 laptop batteries wired together in a giant box behind the cockpit. This year, Tesla occupied a rather awkward spot on the showroom floor. Behind their booth was Lotus, which produces the Tesla’s chassis. And across the aisle was Fisker, the plug-in sports-car builder whose founder Tesla famously sued last year, citing theft of trade secrets. 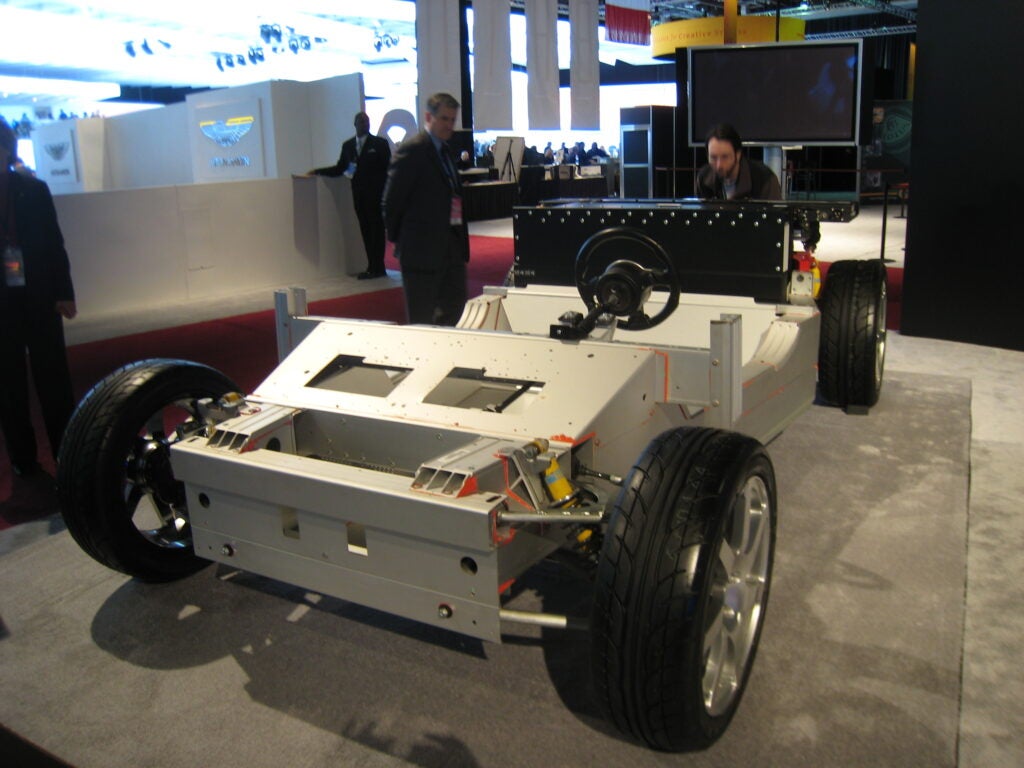 This unsexy piece of machinery is what’s underneath the carbon-fiber skin of the Tesla Roadster. According to Tesla spokesperson Rachel Konrad, the company has now delivered about 160 cars. 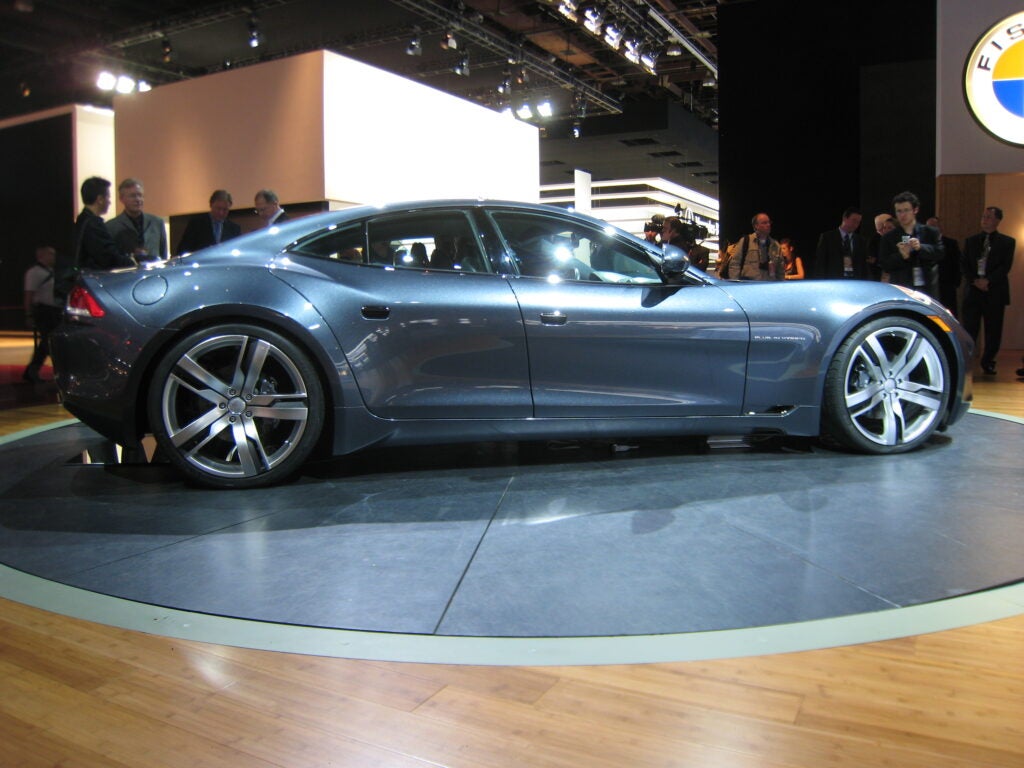 Speaking of Fisker, here we have the production model of the Fisker Karma, an extended-range electric car shown at last year’s Detroit show as a concept. 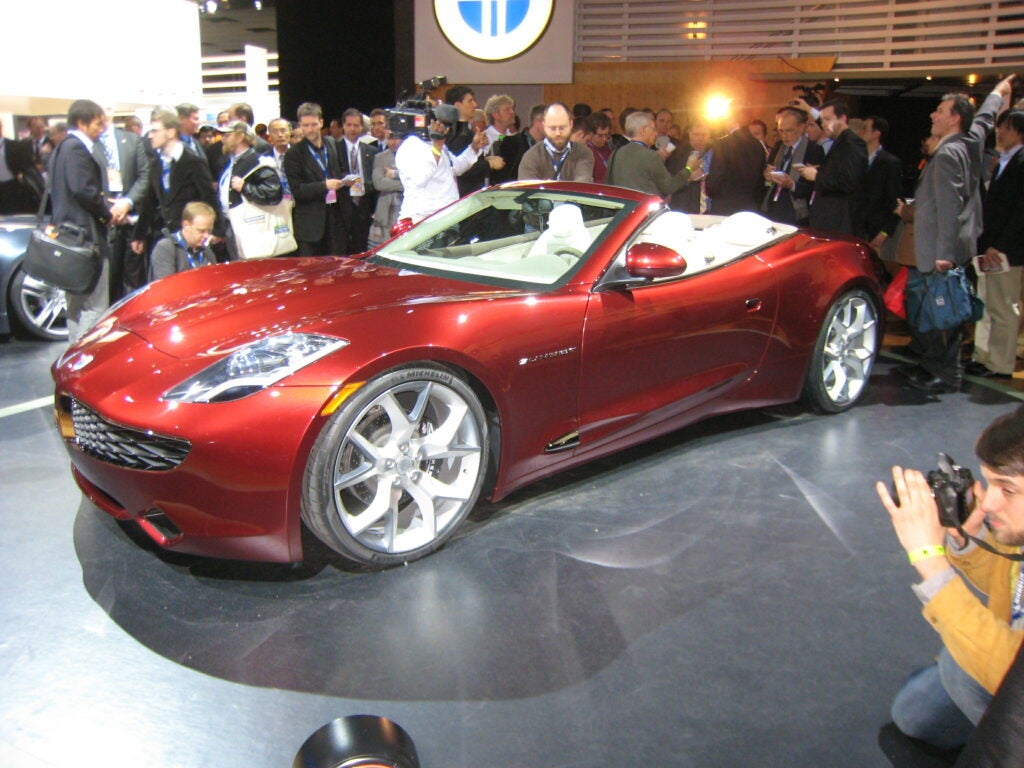 Fisker unveiled a hardtop-convertible two-door variation on the Karma in a press conference on Monday. “California Dreaming” blared over the loudspeakers as photographers elbowed their way toward the car; cocktail waiters passed around flutes of champagne. It may have been the most indulgent moment of this otherwise frill-free show. 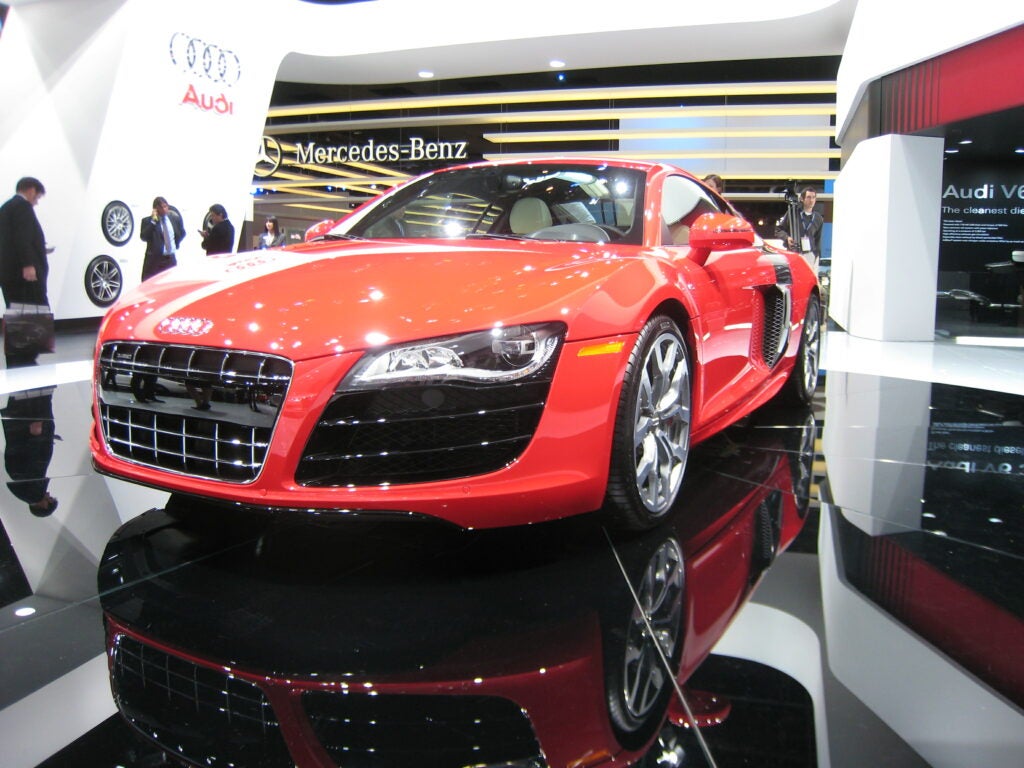 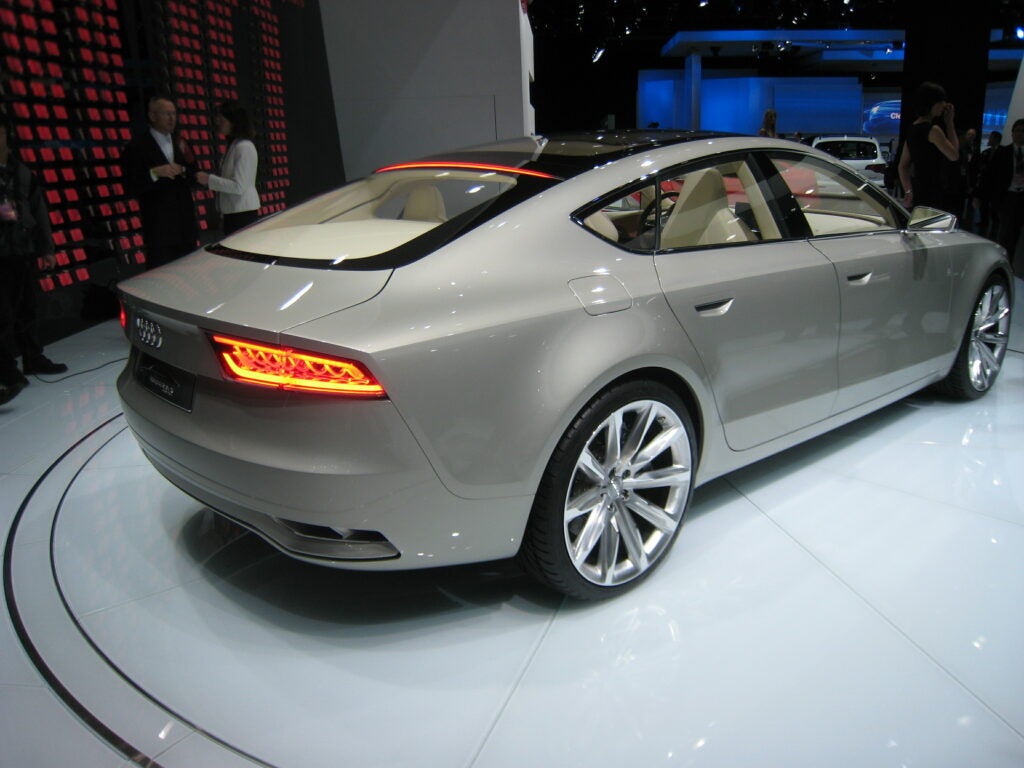 As far as we can tell, the whole purpose of this concept car is to highlight the design element the car is named after: the sportback. According to the press materials, this is a “glimpse at the Audi’s future design vocabulary.” 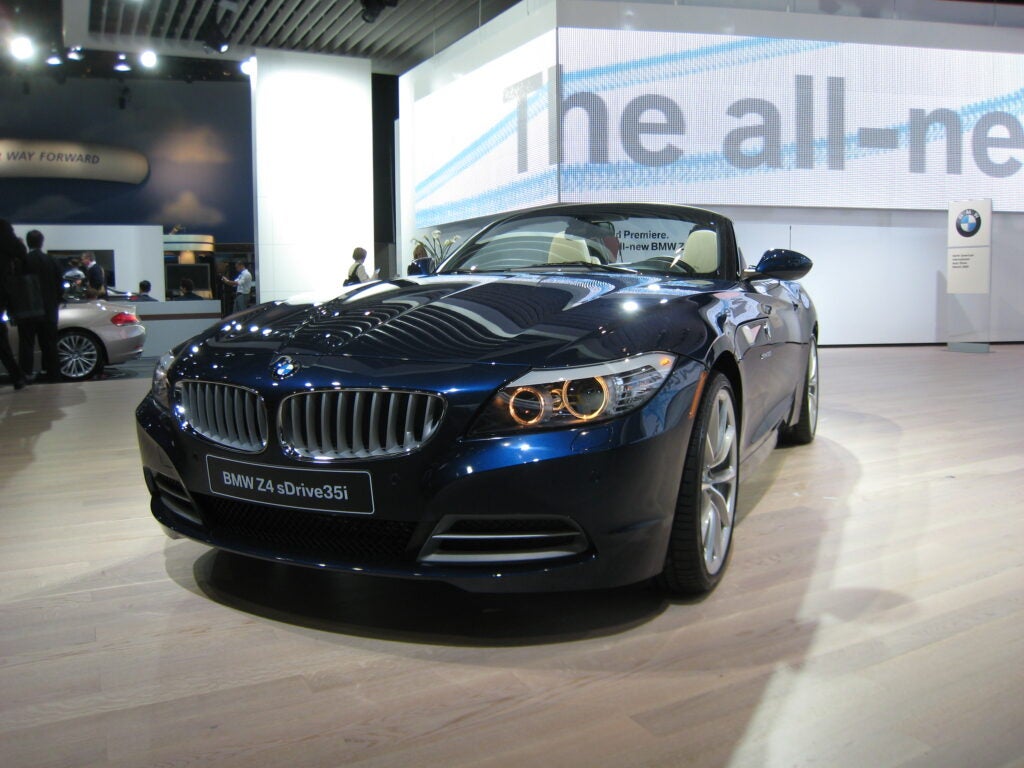 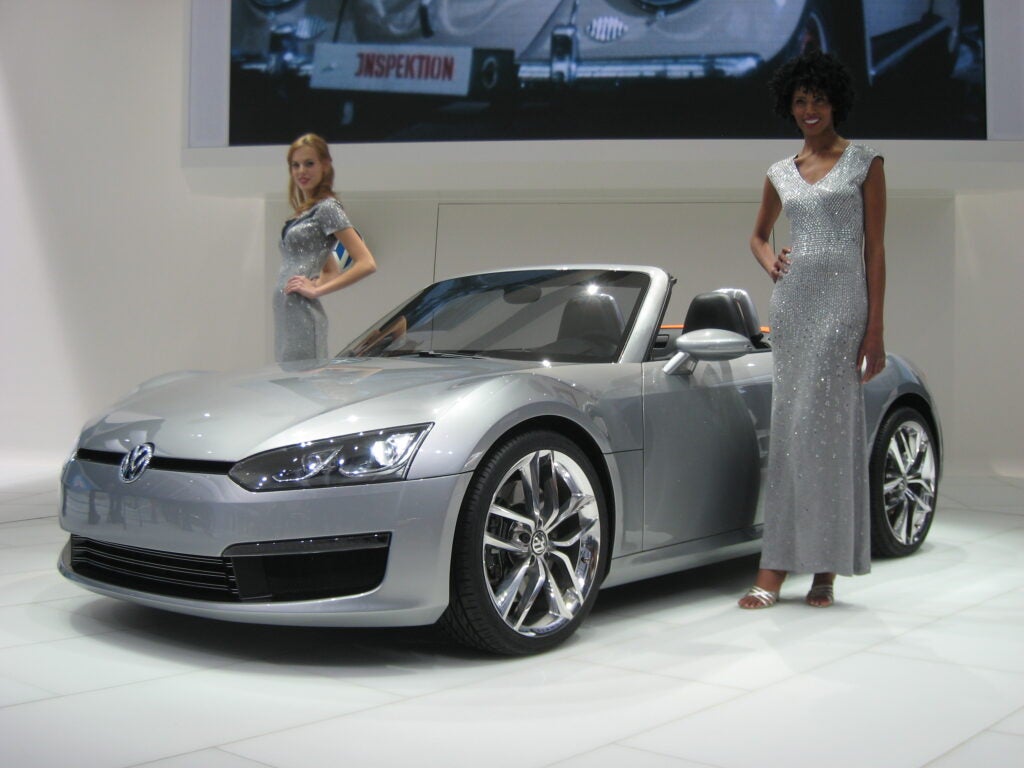 In one of the show’s more surreal moments, this car’s designer, Walter Da Silva, stepped out in front of the crowd, gestured toward the car, and explained his design philosophy—in Italian, with no translator. Here’s what we know: It’s a concept for a hot little roadster that, thanks to an efficient diesel engine, could get mileage as good as 55 mpg. 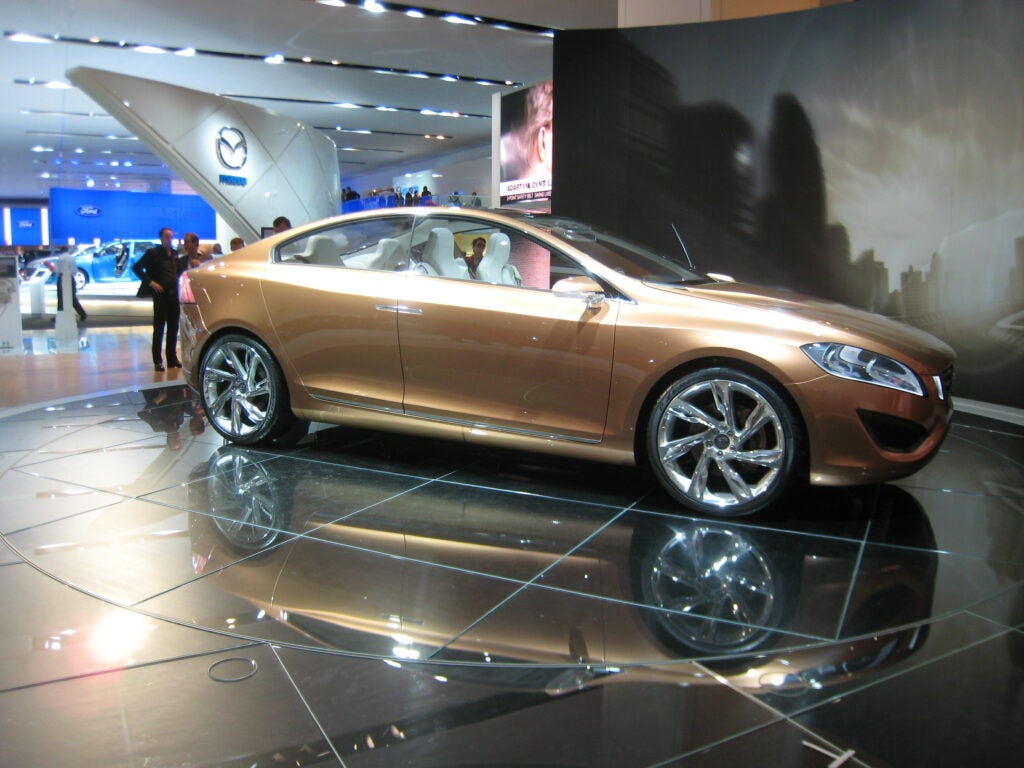 This glimmering, highly attractive machine is Volvo’s S60 concept, and it gives some sense of the design cues—sweeping lines, angled headlamps, and the like—that we can expect in future cars from the safety-conscious Swedes. 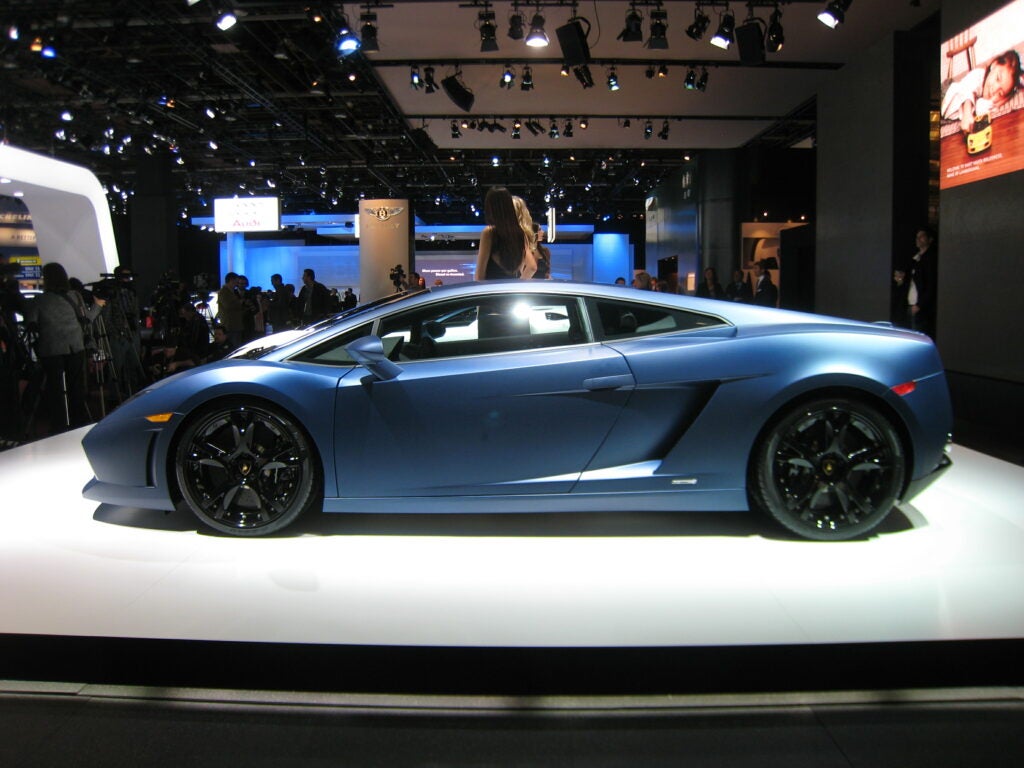 One thing that never seems to change about the big American auto shows: The line of Lamborghinis and the models (as in female human beings) standing at attention beside them. Here, in the foreground, we have the 552-hp (SAE), all-wheel-drive Gallardo LP 560-4 Coupe. 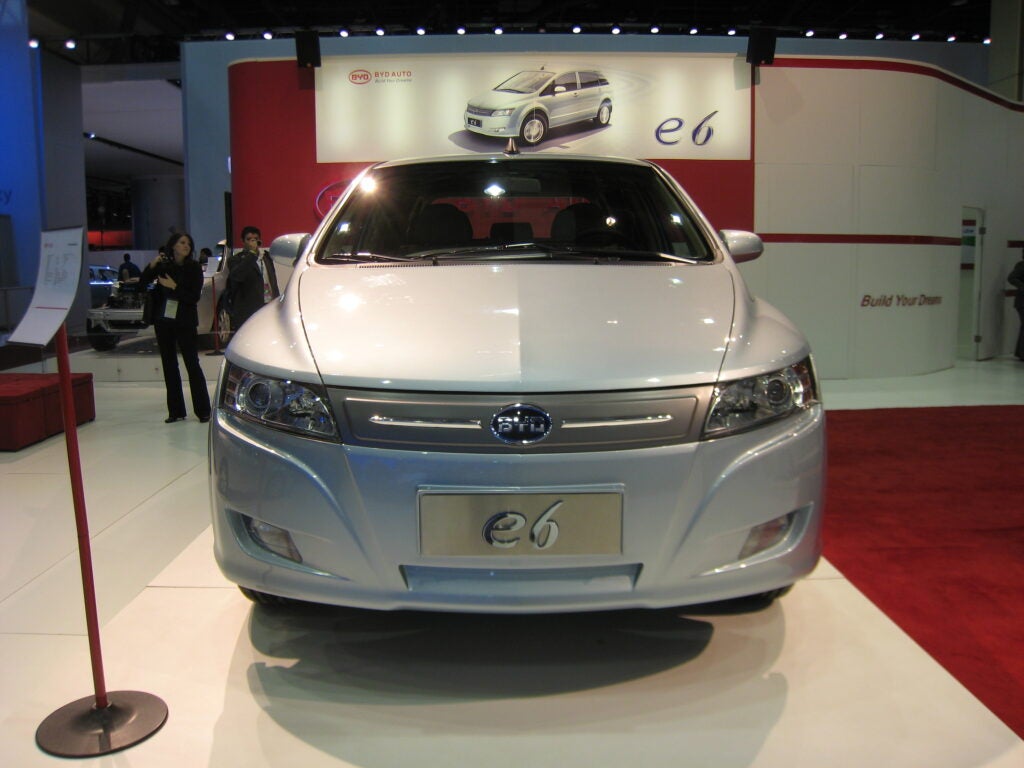 The Chinese company BYD is one of the world’s largest manufacturers of rechargeable batteries. It’s also a carmaker, and it brought several cars to the main showroom this year, including the e6 pure electric concept car you see here. What are the company’s prospects? Well, Warren Buffett just purchased a 10 percent stake in BYD, hoping to cash in if BYD catches on in America. 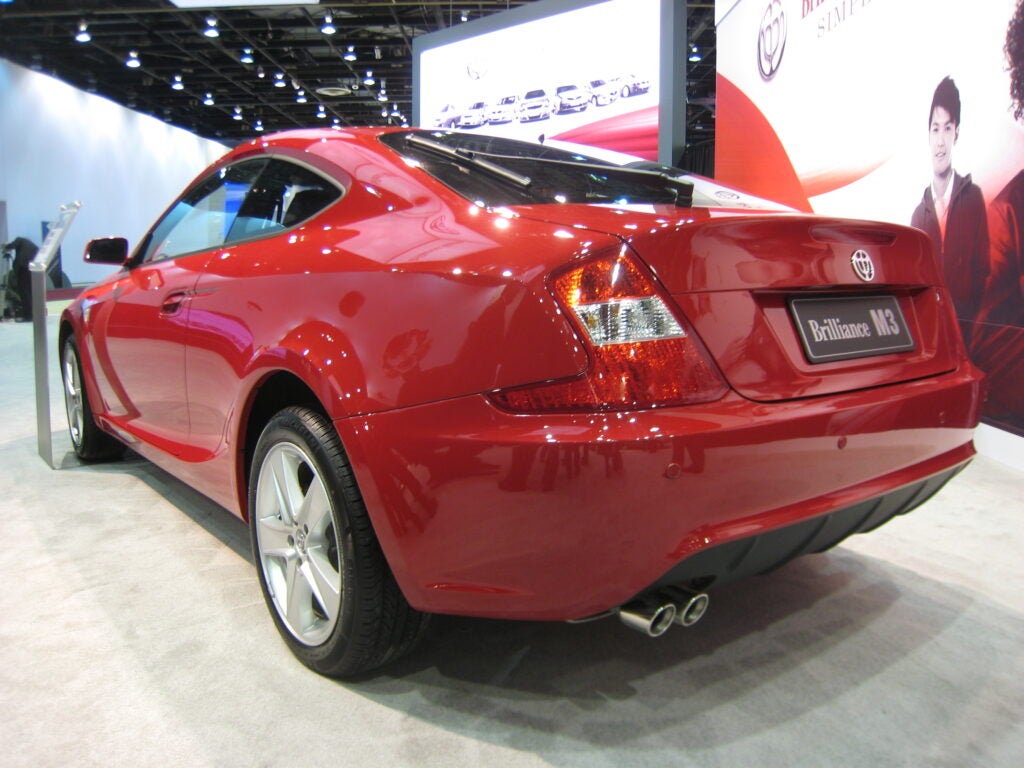 Down the hall from BYD another Chinese automaker, Brilliance, made its first appearance at the Detroit Auto Show, bringing with it a few cars, including the M3 sport coupe (where have we heard that name before?) you see here. The company’s pedestrian press conference, plus the fact that it hasn’t even announced any intention of selling cars in the US, suggests that companies such as the producer of that other M3 have little to fear from Brilliance, at least for now. 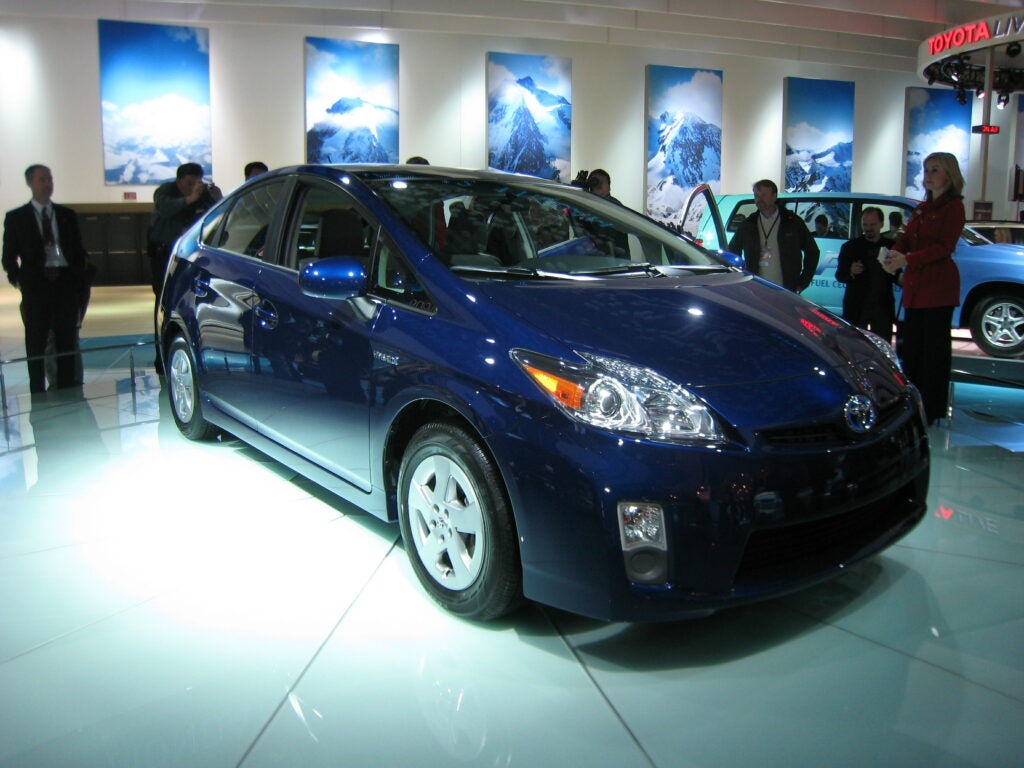