Watch A Fizzy Orb Float Through The Space Station In 4K 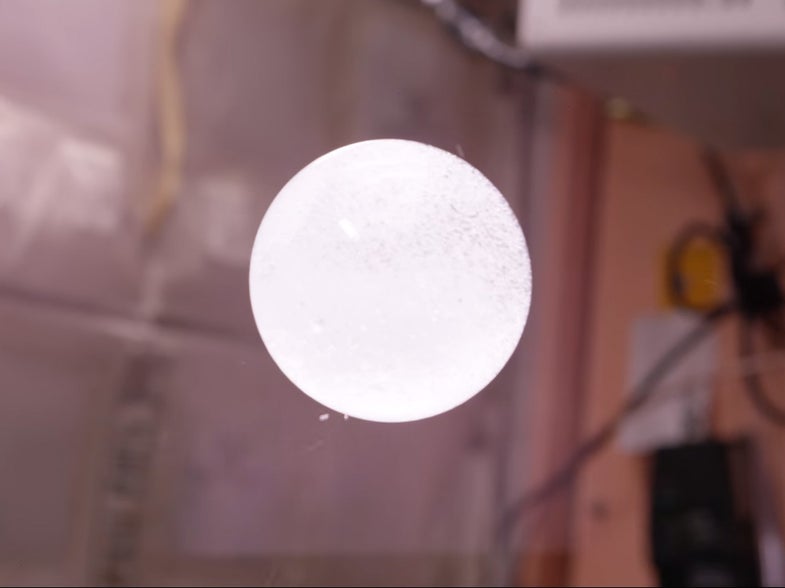 Mankind’s outpost in space, the International Space Station, does a lot of important research. But the astronauts onboard also like to have fun, and the latest video from the ISS is an example of the latter.

In the beginning video, you can watch astronaut Terry Virts blow a blob of water from a syringe. Water balls up in microgravity like that because the V-shaped water molecules are slightly charged. Hydrogen has a slightly positive charge, and oxygen has a slightly negative charge. This makes the hydrogen in one water molecule attracted to the oxygen in other molecules, so water tends to stick together. This effect is strongest on the surface of the water, where it’s almost as if a “skin” forms. Since this layer is interfacing with air on one side, the water molecules share fewer bonds, and that makes them stronger.

Of course, those bonds are only dominant up to a certain point. When Virts adds an antacid tablet to the floating blob, a fizzy reaction takes place, and popping CO2 bubbles send tiny drops of water flying from the blob, just like the specks that jump off the top of a glass of soda. Lit from behind, the fizzy ball looks like a tiny, pockmarked moon.

Although the science isn’t particularly new, the tech used to film it is. The ISS crew used this mini-experiment to test out the “Epic Dragon” camera from RED (considered by many in film to be the Ferrari of movie cameras). The aptly named Epic Dragon captures up to 6K resolution and up to 300 frames per second.