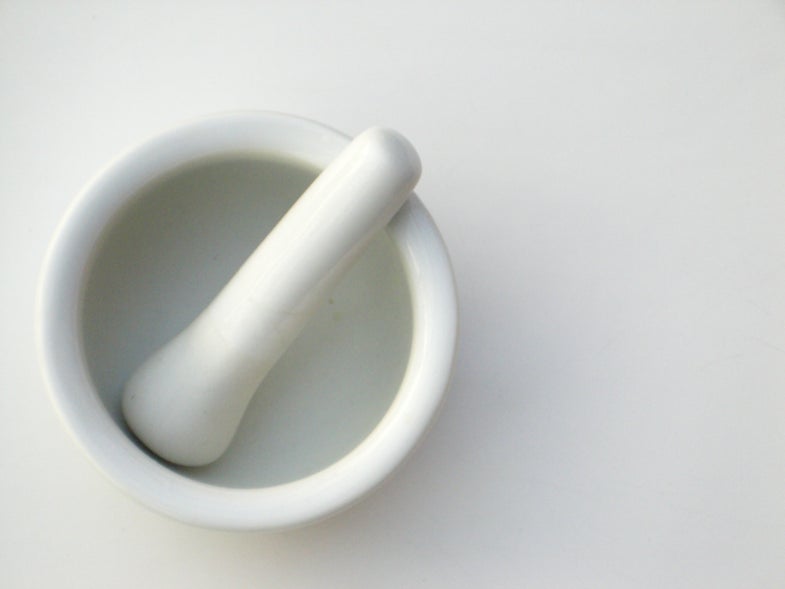 Albina sat crosslegged on the reclaimed-bamboo floor of her condo, with the SmartMortar gripped between her thighs. Leaning into the motion, she ground the pestle with soothing clockwise rotations. She was top of the leaderboard on Grynder, and intended to stay that way. After 50 reps, the mortar chimed: “Good job! Now grind counter­clockwise, and remember to keep your shoulder blades back!”

“Albie?” Light footsteps sounded in the hall, and her husband leaned through the door. Todd sighed. “It’s the middle of the night.”

“With our flight tomorrow, I won’t have time in the morning to grind cornmeal and coffee for breakfast.” Albina kept her focus and tried to take deep breaths with each rotation. She was not going to have this argument again. “I’ll turn the volume down after I finish this set of reps.”

Todd rolled his eyes. “You could, you know, eat instant grits for breakfast. Just once.”

“There’s more nutritional value in hand-ground cornmeal.” This was true, and she was not going to let Brenda47k move to the top of the leaderboard just because they had an early flight. But Todd would only use that as a reason to complain about her obsession again. “Plus, it’s great for my delts.”

He sighed again. “You’re not…you’re not going to bring that with us to Tahiti, right?”

“Of course not, sweetie.” She’d checked the gym at their hotel, and they had a full mortar set, including a traditional Tahitian mortar for millet. “It’s too bulky.”

Mary Robinette Kowal is a puppeteer and Hugo Award-winning author, whose latest book is Of Noble Family.