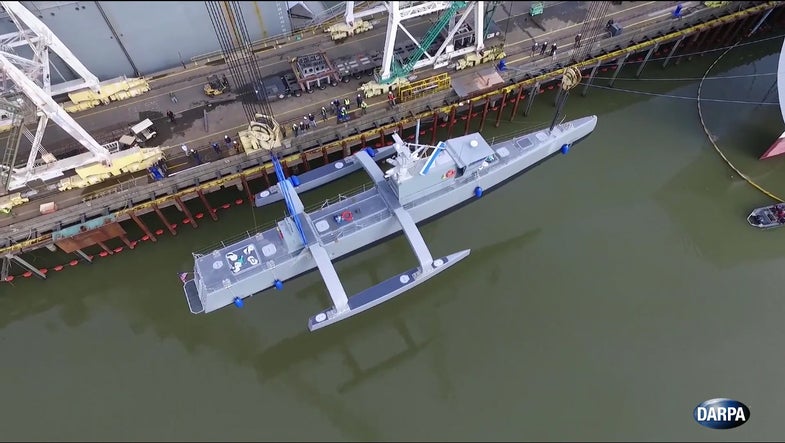 Hunting submarines is dull, dangerous work. It’s an elaborate game of sonar-fueled cat-and-mouse in vast stretches of open water, where the stakes are “finding foreign nations’ seaborne nuclear weapons,” or finding the foreign subs looking for our own seaborne nukes. DARPA, the Pentagon’s future-war focused agency, wants to make it easier to find submarines, and they’re enlisting robots to do it. Giant, full-sized, ship robots:

The ship is ACTUV.. The A is short for “Anti-submarine warfare”, or ASW, and the rest of the name is ASW Continuous Trail Unmanned Vessel. The ship hit water in the middle of February, looking like nothing so much as a sparse gray Battleship piece. Now, it speeds along at 27 knots, or roughly 31 mph.

Yesterday, DARPA released a short clip of the sub-hunter near waters off Portland. With people on deck, it hardly looks like they’re riding a robot at all. But they are. That’s 100 percent a robot they’re riding.