Fancy yourself a suave military gaming tactician? Is prestige level 24 starting to bore you on Black Ops? DARPA wants... 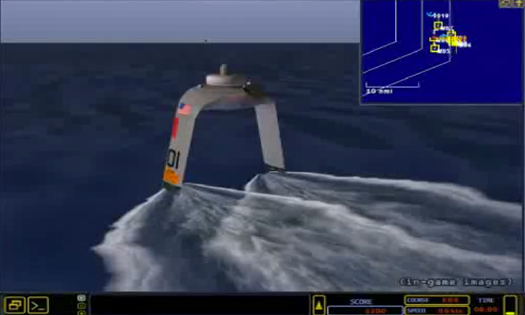 So the graphic realism isn't quite Black Ops, but this military sim will actually influence real-world naval operations in the future. ACTUV
SHARE

Fancy yourself a suave military gaming tactician? Is prestige level 24 starting to bore you on Black Ops? DARPA wants to put your strategic savviness to real military use by integrating its Anti-Submarine Warfare (ASW) Continuous Trail Unmanned Vessel (ACTUV) configurations into the sub-hunting simulator game Dangerous Waters. Download and play the game, and your tactical prowess may just be implemented into ACTUV’s prototype software.

DARPA’s ACTUV program aims to develop new tools for anti-submarine warfare that include unmanned autonomous ocean-going vessels that can track quiet submarines hiding in the depths. But in order to figure out what tactics work (and don’t work) for their ACTUV software, they need to test a variety of maneuvers and sub-hunting configurations in naval scenarios.

That’s where the crowdsourcing comes in. At the end of each round, the software will ask if you want to send your game data to DARPA for analysis–and for possible use in the crafting of ACTUV’s software brain, once it is developed. Corner the crafty AI sub commander, and your data could inform a future line of defense against threats from the deep.