Albert Einstein Now Has His Own Emoji Keyboard

How the late famed physicist became an icon on your phone 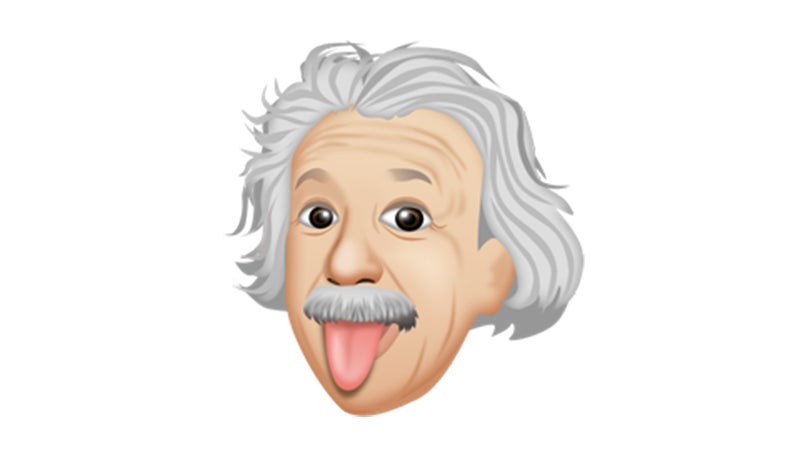 Think of a picture of Albert Einstein. Any picture. It was probably the one of him sticking out his tongue, wasn’t it? That iconic photo by Arthur Sasse is about to become an icon on your phone. That’s right—Albert Einstein now has an official emoji keyboard, EinsteinMoji, on iOS and Android devices.

Though Einstein is not the first celebrity to get his own emoji keyboard, he may very well be the first scientist of this caliber to get one. Previously, scientists such as Darwin and Isaac Newton have gotten individual emoji, but never a full, dedicated emoji keyboard. “The way we talk to each other is changing. Emoji have become a popular way people communicate, it’s a powerful tool,” says Anthony Iliakostas, Business Affairs Manager at Greenlight Rights (which owns the licensing rights to the Einstein brand.)

Iliakostas is in charge of Einstein’s social media accounts and was the one who thought up the idea for Albert Einstein emoji. After doing some research into custom emoji companies, he contacted Moji CEO Oliver Camilo, who loved the idea. “Einstein has remained a cultural figure even past his death, and this is a great way to translate his brand to a younger audience,” Iliakostas explained.

Creating EinsteinMoji was not like creating emoji for other celebrities, according to Camilo. Since Einstein himself can’t approve of the icons, it was up to his estate. Camilo says it took a little more research to make sure all of the emoji were as “authentic as possible.” That “extra research” can be seen in the pictures Moji chose. Of course the most iconic photo of Einstein, the one where the physicist is tongue is sticking out, is the very first emoji in the app. But others include Einstein with his rarely-seen dog Chico and a well-known photo of Einstein sitting in shorts on a beach.

There are also “creative” emoji, that are inspired by Einstein but not directly based on photos of him. For example, there is an EinsteinMoji where Einstein is surfing on a gravitational wave. Another EinsteinMoji turns the nobel laureate into a superhero, both among Camilo and Iliakostas favorite ones.

Iliakostas explained that Einstein actually has a deep connection to the comic book world, having appeared in stories by both Marvel and DC, including Batman, Wonder Woman, and the Fantastic Four. The now-defunct Charlton Comics even made a comic called E-Man, a packet of energy that travels the galaxy learning about life and how to assume the different forms it takes. Upon reaching Earth, it takes on a humanoid identity, gets inspired by Einstein and, when fighting crime, has E=mc2 emblazoned across its chest. “We thought it was only right to give Einstein the superhero treatment because he is viewed by many as a superhero,” Iliakostas said.

Iliakostas has been testing the app with friends and family and says he gets the same reaction each time. “‘Einstein has emoji? I can’t believe it!’ Not in the sense that he’s being defamed, but at last it’s finally happened.”

I’ve gotten several reactions from my peers and coworkers too, from “OMG!!” to amused chuckling at me for being a dork. But I truly don’t mind being a dork with EinsteinMoji. I thought I would have to go out of my way to remember to use the app, but I actually found myself looking forward to the times I wanted to send someone an emoji and sent them one of Einstein.

PopSci intern Sara Chodosh has also been testing the app, and enjoying it. “Sometimes the right emoji comes along at exactly the right time. For me, that emoji is Albert Einstein wearing fluffy pink slippers,” she says. “It integrates into your keyboard easily–easy enough for someone with zero extra keyboards to figure it out.”

Though the app is a keyboard, it can also be installed as an iMessage add-on in iOS. That means you can text it to your friends, but also use it with external apps, like Twitter, Slack, and more.

Though there are a lot of EinsteinMoji to choose from, I have found myself looking for some of the simpler emoji I use in my everyday life, like the thumbs up or OK hand. The closest equivalent, which is my most-used EinsteinMoji, is one that reads “That’s genius!” above the, well, genius.

There are more EinsteinMoji on the way though, and they’ll be in a similar vein to “That’s genius!,” according to Iliakostas—pictures of Einstein with text above them. Though no specific text has been chosen yet, Iliakostas tells me they will be along the lines of “Good morning,” or perhaps my missing thumbs up with “That’s great!” There are also plans to create an Einstein mic drop emoji, inspired by a tweet Iliakostas sent out when gravitational waves were detected this past February, and other designs will be created as Einstein continues to pop up in the press.

Moji also takes feedback from its users seriously, with Camilo telling me the company reads every single email it gets.

So what’s the point? Why is Albert Einstein getting emoji a big deal?

Camilo sees this trend in his personal life. “My 57-year-old mother uses emoji,” he admitted. “My stepfather is a big intellectual and fan of Einstein, but he understood all of it immediately. I think that provides a more fun way for them to communicate.”

Before you can argue that science and emoji don’t overlap, know that some of these characters actually have their roots in science. Charles Darwin outlined more than 50 universal emotions in his 1872 book The Expression of the Emotions in Man and Animals. When developing its Reactions, the additions to the ‘Like’ button that launched this past February, Facebook turned to Darwin’s book, among other places, for inspiration (the company ultimately settled on Like, Love, Haha, Wow, Sad, and Angry).

EinsteinMoji is available now on the App Store and Google Play store now for $1.99.