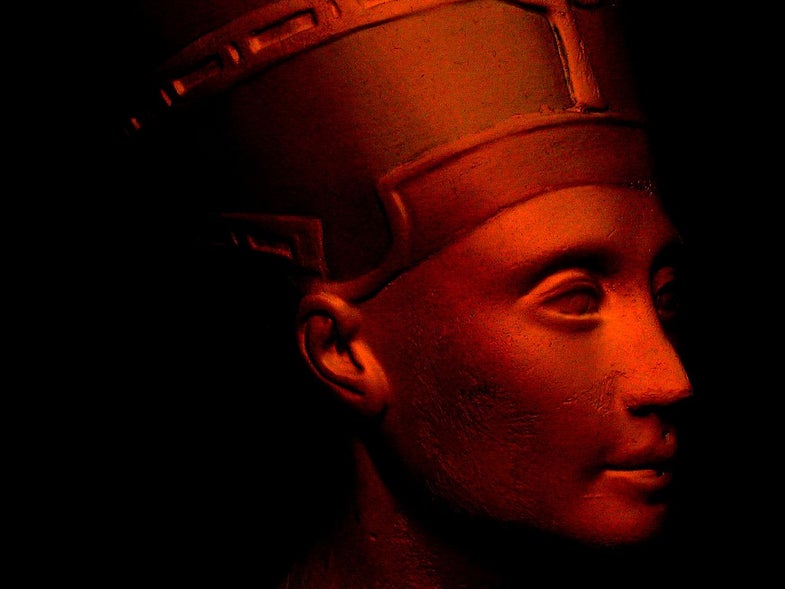 Nefertiti belongs to the ages. Does her likeness belong to the people? That’s a question for philosophers and museum curators to debate, but thanks to an enterprising group of secretive scanners, it has a practical answer: yes. Using Microsoft Kinect scanners hidden under scarves, Nora Al-Badri, a German-Iraqi artist, and Jan Nikolai Nelles, a German artist, recorded the bust of Nefertiti at the Neues Museum in Berlin last year. That bust is now available as a 3D rendering that people can download and 3D print.

Queen Nefertiti ruled Egypt with her husband, the pharaoh Akhenaten, during Egypt’s 18th dynasty, around 1350 BC to 1334 BC. Archaeologists search for her tomb to this day. The bust of Nefertiti was found in an ancient sculptor’s workshop in Egypt in 1912, and taken to Germany, where it has resided ever since. Here’s what the scan of the bust looks like:

Since the bust’s discovery, it’s become both a symbol and figurehead of tensions in preservation culture and museums. Standards for archaeological work have changed a lot over the past century, and the once-fashionable idea that artifacts needed to be in European museums for safekeeping is now met with calls for returning art and artifacts to their country of origin.

Germany has so far not granted the bust of Nefertiti a right to return home to Egypt, so instead, scans of it may be the next best thing. At Hyperallergic, Claire Voon writes:

Watch the surreptitious scanning below: