Trove Wants To 3D Print Your Jewelry, And Then Your World

Make custom jewelry from your browser 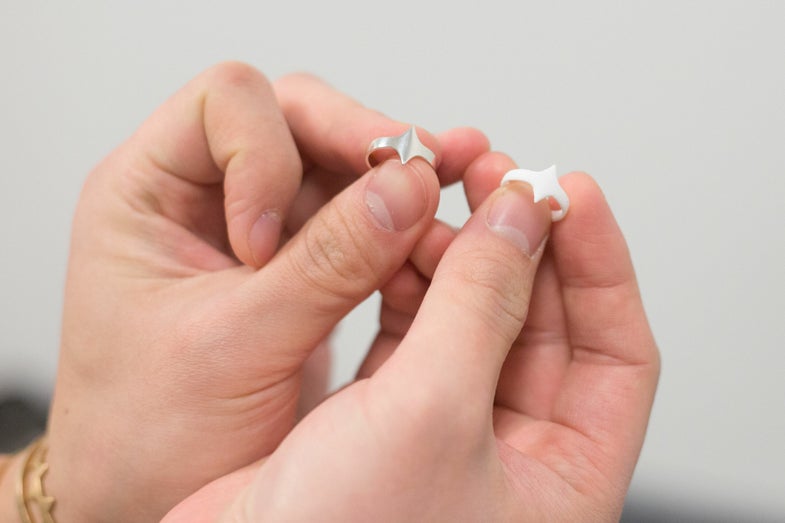 Shopping for jewelry has been essentially the same since people started wearing jewelry: either you bought what was in a store, or worked with a jeweler to make a custom piece. The latter is usually way more personal, but also more expensive.

A new startup company called Trove (not affiliated with the news aggregation site of the same name) wants things to be different. By leveraging 3D printing, every piece of jewelry the company produces is custom and user-created.

“Every single thing is made to order,” Andrew Hong, co-founder of Trove said. “Every one of these [pieces] is individual.”

The way Trove works for users is simple: you log onto the website, select what base model of jewelry you want to customize, like ring or necklace, and then use sliders to shape your piece. This is what separates them from other sites, like Shapeways, that sell 3D printed jewelry. With Trove, you customize it yourself.

Once the order is put through, a 3D model is created of the custom ring or necklace or bracelet. It’s then printed in plastic and shipped to the user, to try it on, make sure it’s what they wanted. If so, that same 3D model is then used to print a wax mold, which is filled with the desired metal, a similar process to traditionally designed jewelry. Trove makes rings in most common metals, like bronze (which is the cheapest), silver, and varying karats of gold.

The automation of the process also allows Trove to cut costs—their cheapest custom jewelry runs at just under $40 for a bronze ring, and can pass $1200 based on how much metal is used in the design.

The use of 3D printing allows Trove to iterate new products quickly and test them in plastic forms easily before posting designs on the site. One upcoming ring design is a collaboration with a biochemist-turned-3D-printing-jeweler Kimberly Falk, who uses digital noise to create unique textures. Random numbers (the noise) are made to represent different heights of the material. When applied the ring, it a looks a bit like the surface of the moon, with craters, bumps, and ridges.

“This one takes a lot of work to do because it’s so math-intensive,” Hong said.

When I visited the lab, which is a tiny room in a shared workspace in downtown Manhattan, Hong was printing a new design based on a classic: a masculine ring with three inscribed initials.

Also in the tray of prototypes was a giant plastic cube mounted onto a ring. Hong explained that this is what happens when one of the designs, a bar mounted on a ring, was maxed out in height, width, and depth.

“We might re-introduce that if someone wants a giant block of gold,” Hong said. “We had to take it down because it would end up being like $13,000 in gold.”

The initial designs on the site are still limited, but Hong says Trove will soon be able to inscribe images and even use gemstones in designs. Once that happens, it’ll be much easier to facilitate things like wedding rings, although the startup does take custom orders. Shipping is also limited to the continental United States.

And actually, for Trove, jewelry is just the starting point. Hong says that eventually, they want to custom-print any kind of home good, from pencil holders to room-dividing screens. They envision a world where everything in your home can be custom, and designed in just a few clicks.

“The technology is all there,” Hong says. “We just need to find a way to tailor it to something users can use.”