Is There A Scientifically Valid Way To Interrogate People?

Even if torture were condonable, it doesn't work, says a research psychologist. What does? 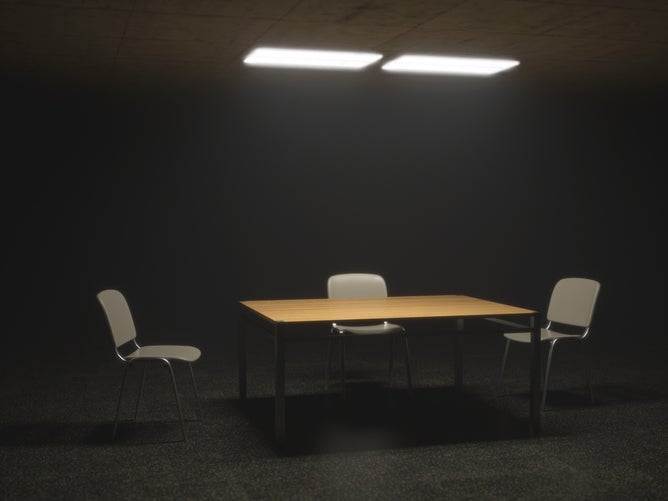 The release of the US Senate Select Committee on Intelligence report on the CIA’s detention and interrogation program documents the use of so-called enhanced interrogation techniques (EITs) against terrorism suspects detained by the agency.

The report concludes that the CIA program was more widespread and egregious than the American public – and Congressional oversight committees – had been led to believe. Not surprisingly, key findings in the report also call into question the claimed efficacy of EITs in eliciting reliable intelligence information.

As a research psychologist who has spent more than a decade assessing the effectiveness of various interview and interrogation methods, I regard release of the Senate report as a uniquely important event. It should encourage us to critically assess the ethical, legal, and scientific basis upon which the EIT program was based. Just as important, it should prompt us to consider how we devise our future interrogation practices.

An absence of scientific scrutiny

The report offers an opportunity for us to reflect upon the events that led to the use of EITs by the CIA, as well as the debate over their purported effectiveness.

While proponents claim these methods are necessary to compel uncooperative subjects to divulge critical information, critical analysis fails to justify their use.

From my perspective, EITs are ethically indefensible. Their use appears to violate both domestic and international law. Furthermore, no scientific assessment of the techniques can be offered to demonstrate their effectiveness in practice.

The report’s first finding agreed – the “CIA’s use of its enhanced interrogation techniques was not an effective means of acquiring intelligence or gaining cooperation from detainees”. However, the debate between critics and proponents of the program continues, with both sides offering anecdotal evidence to support their claims.

The absence of (and need for) scientific scrutiny on this issue is obvious. Unfortunately, ethical issues once again pervade any such discussion. The ethical conduct of experimental research would preclude any responsible scientist from systematically assessing the CIA’s “enhanced interrogation techniques”.

How should one conduct interrogation?

A 2006 Intelligence Science Board concluded that the US Government’s interrogation practices were largely devoid of any scientific validity.

In fact, existing research into current practices in the US indicates that the use of an accusatorial approach – characterized by accusation, confrontation and psychological manipulation – can produce false confessions if applied against innocent subjects.

In 2009, the Obama administration created the High-Value Detainee Interrogation Group (HIG), an inter-agency group comprising personnel from the FBI, CIA, and (Defense Intelligence Agency) DIA. The operational mission of the HIG was to conduct interrogations of high-value terrorism suspects. In addition, the HIG was also tasked with developing a research program to assess the effectiveness of current interrogation practices and to develop novel, science-based methods.

Since 2010, I have led a group of internationally renowned psychologists from the US, UK, Sweden, Australia, Southeast Asia, South Africa, and the Middle East to do just that. For the past four years, we have worked to develop new methods of intelligence interviewing and interrogation. This research is unclassified and is conducted with the oversight of Human Subjects Review Committees that protect the rights and welfare of study participants. Our group has produced more than 60 studies – from experimental research to interviews and surveys of interrogation professionals and systematic analysis of specific criminal and counterterrorist interrogation interviews.

These studies assess the importance of social relationships, active listening and personal rapport in extracting information. They have developed methods that enhance memory recall and evaluate what kind of questioning can help an interrogator judge whether a suspect is telling the truth or not. They look at the impact of the interrogation context (how should we setup the interrogation room?), and the role of culture and language (including the influence of interpreters).

We are working with US military, intelligence, and law enforcement agencies to introduce science-based methods into their formal training programs. The good news is that these methods are now being taught to US government personnel.

Our findings clearly show that interrogation strategies that are based on building rapport and seek to understand a suspect’s motivation to cooperate are more effective than accusatory practices that look to raise anxiety levels, fabricate evidence, and minimize a suspect’s perception of their own culpability. This conclusion is confirmed by the experiences of many highly skilled interrogators. Further, the “information gathering approach,” as it is known, preserves the ethical principles of fairness and justice and is legally permissible.

A complete description of the implications of this research is too detailed to be included here. However, the results of our efforts are available to both the scientific and professional communities. Studies conducted by our researchers are being published in peer-reviewed journals and presented at both academic and professional meetings. A new publication, Interrogation: Expanding the Frontiers of Research and Practice, shares our findings with interrogation professionals, US Government trainers, and the public.

Our research program represents only the beginning of what is possible. Medicine and education have turned to researchers for the development of evidence-based approaches. It is time that the practice of interrogation be similarly informed by scientific scrutiny.