Probably not, but they could have their own unique dangers 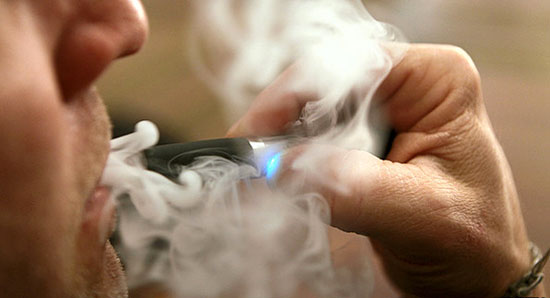 New calculations from the U.S. Food and Drug Administration quantify how much pleasure Americans lose by not smoking tobacco vapor products, such as e-cigarettes. Los Angeles County Supervisor
SHARE

The headlines above, which we saw over the weekend, are referring to a study that Japan’s Health Ministry commissioned and received results from last week. As far as we can tell, the study scientists, from the Japanese National Institute of Public Health, didn’t talk about their findings in any official press conference or press release. They haven’t published a peer-reviewed scientific paper about their results, although we would love to see the study peer-reviewed in the future. Instead, it seems the scientists passed their results directly along to the Health Ministry, as commissioned. Then reporters at the AFP and JIJI, a Japanese newswire, talked with the scientists and with the Health Ministry about the findings.

The research team analyzed e-cigarettes by having a machine “inhale” puffs from unnamed brands of e-cigarettes and analyze the puffs’ chemical content, AFP-JIJI reports. The AFP-JIJI story suggests the team looked for more than one or two carcinogens. The report didn’t say how many, however, or which ones. Combustible cigarettes create dozens of carcinogens. The researchers could have focused on any number of them.

“The most important finding is that the vapor contained recognized carcinogens,” Health Ministry member Hiroyuki Noda told the Guardian. If that’s true, the study will join others with similar results.

It’s plausible that e-cigarettes have their own particular dangers. That can be true even while e-cigarettes are, in general, less dangerous than traditional tobacco smoking.

The AFP-JIJI report also highlights results the team found for one chemical, formaldehyde. The team found at least one brand of e-cigarettes had “much higher levels” of formaldehyde—about 10 times as much—in its vapor than regular cigarette smoke contains. However, it’s not clear why AFP-JIJI chose to talk about formaldehyde. Was it because out of all the chemicals the research team analyzed, formaldehyde was the only one present in “much higher levels” in e-cigarette vapor versus regular cigarette smoke? Or was it because formaldehyde is a familiar chemical name to many people? Maybe the team found several carcinogenic chemicals appear in higher concentrations in e-cig vapor than in tobacco smoke, but the AFP and JIJI chose not to talk about those findings. They might not have anticipated how hungry regular readers would be for those details.

Previous studies have found that electronic cigarette vapor contains far fewer toxins than regular cigarette smoke. In fact, many scientists think that using e-cigarettes exclusively is likely less harmful than smoking an equivalent number of regular cigarettes. (That said, it’s not clear how many people fully replace an existing smoking habit with vaping. It might not be that many.)

It’s plausible that e-cigarettes have their own particular dangers and even that certain brands produce unusual amounts of formaldehyde or certain other carcinogens. It was a new-generation e-cigarette that produced those high levels of formaldehyde, National Institute of Public Health researcher Naoki Kunugita told the Ecigarette Research Advocates Group. All that can be true even while e-cigarettes are, in general, less dangerous than traditional tobacco smoking. As legendary tobacco researcher Stanton Glantz told SFGate in May, “You can be a lot less bad as a cigarette and still be pretty bad.”

The takeaway is not in the details of the Japanese study, which aren’t fully available publicly. The big-picture message that there’s emerging evidence showing e-cigarettes have their own dangers. It may be another generation yet before we have as strong of science about e-cigarettes’ risks as we do for tobacco smoking. Meanwhile, it’s helpful to have studies like the Japanese one.