Behind the wheel of Volkswagen’s reinvented classic: the electric ID.BUZZ

We tested out the European version of this nearly mythical vehicle. Here's what it's like to drive. 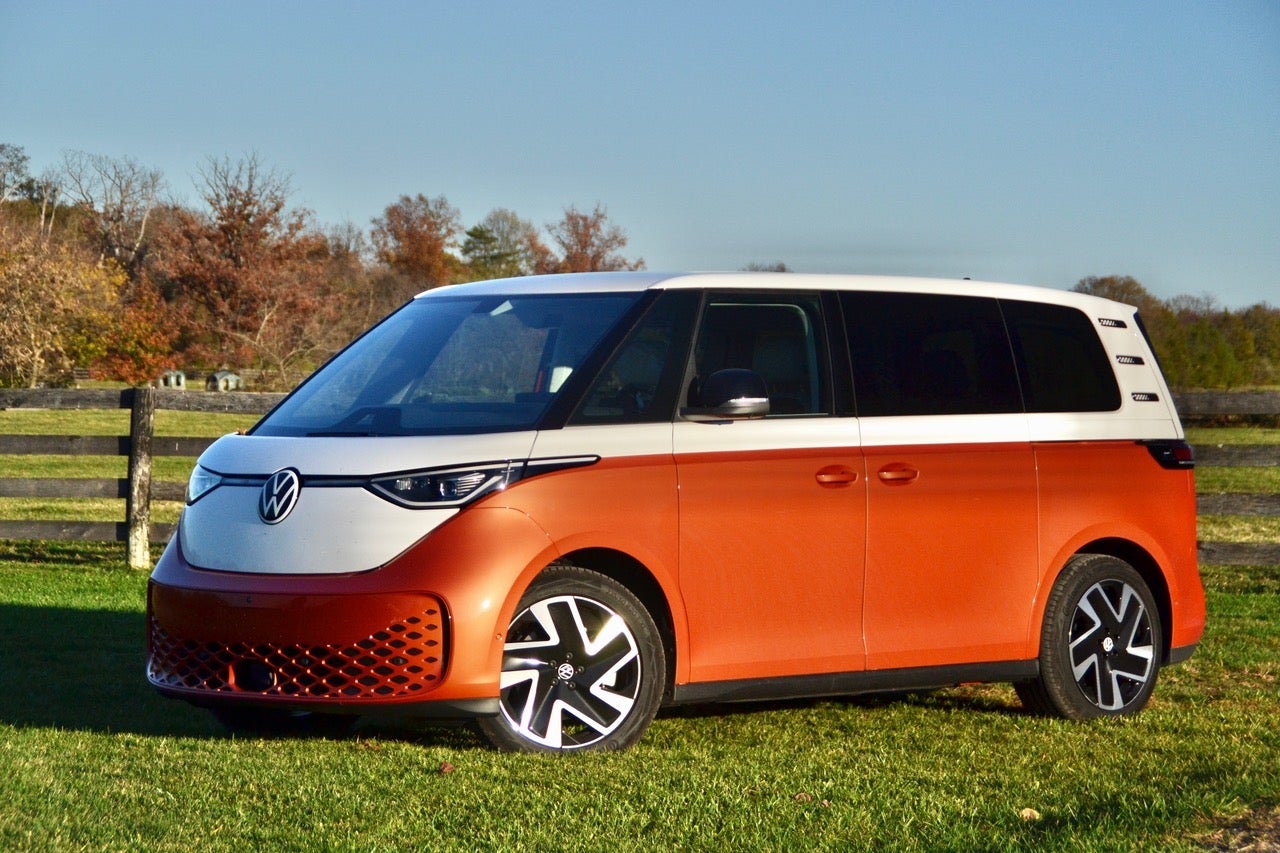 The European version of the ID.BUZZ. Dan Carney
SHARE

Golems, leprechauns, and new-generation versions of the classic Volkswagen bus are all mythical creatures of fantastic legend, but unlike the others, at long last, the Volkswagen ID.BUZZ is a real, drivable machine, and Popular Science got a chance to take one for a spin.

Imagine getting to drive the automotive equivalent of the Loch Ness Monster—that’s the feeling of piloting a real-life all-electric 2023 VW ID.BUZZ down everyday streets, surrounded by mere mortal vehicles. The outrageous throwback styling puts smiles on the faces of passers-by, and it will probably be difficult to stop with one at a public charger without an impromptu Q&A session.

This ID.BUZZ is not a concept, not a pre-production prototype, or any other form of not-real vehicle like that crazy Ford Mustang Mach-E 1400 we track tested. VW has whetted fans’ appetites for a new version of the classic bus with three different concept vans between 2001 and 2016, before finally showing the concept version of the ID.BUZZ production model in 2017.

Our test vehicle, however, is a European-market configuration, so while this ID.BUZZ is not imaginary like a sasquatch, it is also not exactly the vehicle that Americans will be able to buy when they arrive in US dealers.

Instead, this example ($67,000 base price), is a short-wheelbase (118 inches), two-row, five-seat model that we will not get in America. We’ll get a longer model with three rows of seats to hold seven passengers. But otherwise, this test vehicle is an accurate representation of what we can expect to find in dealers. Unfortunately, we will have to wait until 2024 to take one home, as VW focuses on fulfilling orders in Europe, where the van is already on sale.

However, if you want the electric driving experience of the ID.BUZZ without the cool nostalgic styling, hefty price tag, or lengthy wait, the company’s ID.4 crossover SUV delivers much of the same experience today, as both vehicles share their Modular Electric Toolkit (MEB is the German acronym) platform and dashboard controls and displays.

Volkswagen’s original bus was built on the platform of the Beetle compact car, producing a people hauler that, while much-loved by the Baby Boom generation as it took them to Woodstock, was comically underpowered. Westfalia camper versions sported a pop-up tent on the roof, and later iterations switched from air cooling for the engine to water cooling to help boost power. The VW EuroVan was the last version of the bus imported to the US, ending its run here in 2003.

The shared platform between the ID.BUZZ and the ID.4 means that there is an 82-kilowatt-hour battery pack (which has a usable capacity of 77 kWh) powering a 201-horsepower electric motor that can accelerate the bus to 60 mph in 10 seconds. The driving experience is similar to that of the ID.4, with a twist shifter to select drive or reverse, numb electric power steering that gives little feeling for the road, and an impressively tight turning circle that makes it easy to pilot the vehicle into parking spaces.

Twist the shifter into Drive and then twist it a second time to set it to the high-regeneration mode that recharges the batteries when you lift off the accelerator pedal. However, while this vehicle delivers much of the one-pedal driving experience, the ID.BUZZ does not come to a complete stop when taking your foot off the accelerator, so in stop-and-go traffic you still have to dance between the accelerator and the brake.

The longer US model will need more space to turn around because of its stretched wheelbase, but the tight turning radius of the Euro-spec version suggests that even a longer model will still be easy to line up for a parking space.

For now, the ID.BUZZ is saddled with the same unfortunate ID.COCKPIT capacitive-touch controls for functions like door locks and volume control that infuriate many drivers in the ID.4. We can only hope that VW will swap those controls for the US model with some decent physical knobs and buttons.

The cabin in the ID.BUZZ is also reminiscent of the ID.4. While the styling is very different, the hard, unfriendly materials used on most of the interior surfaces are the same. The upholstery in our test vehicle’s seats was a nice combination of throwback plaid fabric on the contact surfaces of the seats that actually touch the occupants and easy-to-wipe-clean vinyl.

What they won’t be able to change is how VW’s engineers matched the MEB platform to the ID.BUZZ body. For one thing, the van is about six inches wider than the ID.4, but the seats seem to have stayed in the same location inside the vehicle. That pushes the doors further from the occupants, making the armrests on the door panels uselessly distant.

To address this, VW has put fold-down armrests on both sides of the van’s front bucket seats. Fold down the outer armrest and you have support right where you want it. Forget to fold it back up when you try to depart the vehicle and you’ll get an unpleasant reminder in the ribs that the armrest is down. Imagine dealing with this every day.

Having the doors far from the van’s occupants has the benefit of leaving plenty of space in the lower door panel for XXL-sized water bottle holders, so the popular Yeti-type giant water bottles will fit in the ID.BUZZ bottle holders.

Another aspect of the MEB platform is that, as an EV platform, it mounts the bus’s 12 battery modules into the floor. As a result, the floor is very high, making entry a challenge, especially for shorter people. The interior grab handles are located above the front door openings, which is normally the preferred location. But the ID.BUZZ has a very high roof in addition to its high floor, potentially putting those handles out of reach for the people who most need them.

The ID.BUZZ’s floor is 22 inches off the ground, but there are cutouts in the door openings that drop it down to 19.5 inches in a bid to provide occupants a toe hold for climbing aboard. In comparison, the Chrysler Town & Country-derived Volkswagen Routan minivan, which was the company’s most recent US market van, had a floor that was 17.5 inches off the ground.

People are used to SUVs being higher from the ground, but those often employ running boards to provide a step in, which the ID.BUZZ does not have. Another thing people are used to is having windows in the rear doors that actually open. This is the norm for SUVs’ hinged rear doors and family vans’ sliding rear doors, but the windows in the ID.BUZZ’s rear doors are fixed closed, which will make it tougher to route emergency fresh air to back-seaters who are feeling motion sickness coming on.

Anyone who is prone to motion sickness is going to especially suffer in the ID.BUZZ, as its very stiff suspension provides a ride that is surprisingly harsh for a vehicle that is carrying 1,000 lbs. of battery ballast in its floor.

The stiff springs cause the ID.BUZZ to crash over every bump and pavement imperfection, which is uncomfortable. But worse is its tendency to rock side-to-side sharply, without the suspension compliance to absorb irregularities that are especially common on the right edge of the pavement.

The test vehicle rolled on the optional 20-inch wheels, which are a feature that designers love. But their low-profile tires lack the sidewall height to provide the air cushion that smooths the ride. Equip an ID.BUZZ with 18-inch wheels and hope the engineers soften the springs for the US market, and this issue could be solved.

Range of the ID.BUZZ

The ID.BUZZ is electric, of course, so it’s fitting to discuss the electrified aspects of its operation. VW says it will go 263 miles on a full charge and that it will do DC fast charging at a maximum of 170 kilowatts, which is promised to boost the battery from 10 percent to 80 percent in 30 minutes.

My time behind the wheel on mostly rural two-lane highways produced a driving range that extrapolated to 210 miles in very mild weather. At the same time, I averaged 3.2 miles per kW, according to the computer, which should yield 246 miles if it uses the full 77 kWh, so the van would probably have made it somewhere between 210 and 246 miles if I’d started with a 100 percent charge and ran it until it was dead.

The ID.BUZZ’s on-board charger supports 11 kW of Level 2 AC charging, which is good except that it is hard to find a Level 2 charging station that provides that much juice. Public Level 2 chargers seem to be 6.2 kW or 7.7 kW, but my Chargepoint Home Flex charging station at home promises to deliver up to 12 kW.

Some of the charging details could change before the ID.BUZZ comes to America, along with whatever other changes accompany the added length and extra row of seating. But what surely won’t change is the bus’s legendary status and appeal to drivers, even if it finally sheds the “mythical” appellation.