The unique creation is the work of Sarah “Bogi” Lateiner and the Girl Gang Garage. 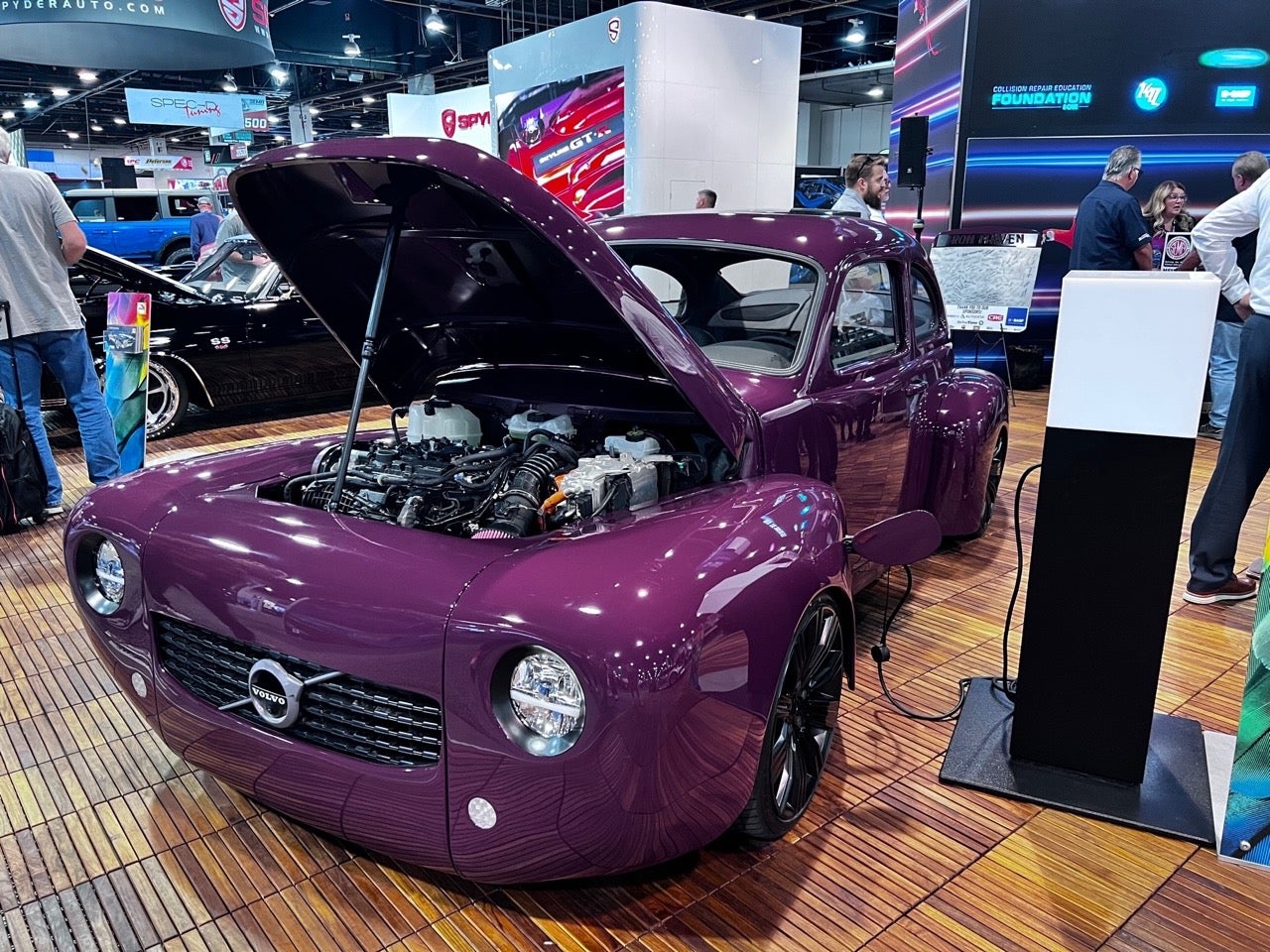 Sarah “Bogi” Lateiner’s latest vehicle creation, called “Iron Maven,” made its debut at an automotive trade show last week in all its purple-hued glory. Starting with a 1961 Volvo PV544, Lateiner’s team retrofitted the build with the powertrain from a 2021 Volvo S60 T8 Recharge Polestar Engineered sedan, along with various parts and components from the newer car.

The result is a vehicle that looks like a 1961 Volvo, but under the vintage hood is a modern Volvo S60. Now completed, the Maven is a feat of mechanical prowess by Lateiner and her leadership.

“We took the S60 and we cut everything off of the outside of it, keeping the floor, subframes, suspension, and engine,” she said. “Then we welded them together; it’s cut and paste. The big challenge was fitting as much of the electronics and the gadgets and the bells and whistles of the S60 hybrid into the PV544.”

Lateiner stars in MotorTrend’s show “All Girl Garage,” and launched her own laboratory, the Phoenix-based Girl Gang Garage, for special projects like the Maven. Behind the scenes is the real story: About 150 women put their hands on this project at Lateiner’s hometown facility.

At the Specialty Equipment Market Association (SEMA) show in Las Vegas, the air was electric as at least 50 of those women gathered around the custom vehicle filled with pride. It’s challenging enough to fuse the body of a 60-year-old car onto a new vehicle, let alone build it in bits and pieces. Girl Gang Garage welcomed women of all abilities to wrench on the car, and some of them had never worked on any kind of vehicle in the past.

Lateiner led the team each day to layer on a little work at a time toward completion. Each person was encouraged to take a look at what needed to be done and problem solve; there was no blueprint. It was like trying to write a story line by line with different authors, each of which with varying levels of expertise and time allotted.

That’s how Lateiner likes it. She’s trying to kick off a conversation. “I want to shatter the stereotypes [about female mechanics] violently,” she told PopSci with a laugh. “That’s why I choose these crazy projects.”

Most weird car projects involve endeavors such as swapping out an engine or boosting a 1995 Mustang with eight turbochargers. But it’s rare to see modifications to Volvo vehicles; not many aftermarket parts exist for Volvo mods, and the average enthusiast likely doesn’t think about tearing apart one of these Swedish family cars to create a hot rod.

Many people don’t know what a Volvo PV544 is to begin with, Lateiner noted. As the Iron Maven, the car is now so heavily modified that people won’t know what it is. That curiosity leads to an exchange about the car and the people behind it.

Colorado Springs-based Volvo technician Porsha Conrad (who worked on the brake lines for Iron Maven with me when I traveled to Lateiner’s garage in June) says Volvos are typically straightforward for making repairs. This concept was technically difficult to build, however, because they had to squeeze the hybrid powertrain into a much smaller car, and the electrification itself was a bit intimidating.

To get a picture of the differences between the vintage PV544 and the S60, the older car was 10 inches shorter and 10.6 inches narrower than the S60. The PV544 had a four-cylinder engine making 40-80 horsepower and the S60 brought a new 2.0-liter four-cylinder turbocharged and supercharged engine to the party.

In 1961, hybrid setups like what’s in the S60 weren’t even a sparkle in Volvo’s eye, and the Swedish automaker has come a long way to arrive at this power combination. Along with its electric motor, Iron Maven boasts a combined output of 415 hp and 472 pound-feet of torque.

In total, the project took 18 months to complete. Starting with old school bodywork and fabrication, the Girl Gang crafted panels from scratch and 3D-printed door handles and door lock actuators. Lateiner and friends had to accept a certain amount of cutting and welding as part of the process. They sliced open the floor of the PV544 and slashed out the firewall to essentially “fit 15 pounds into a five-pound bag,” Lateiner said.

After a year and a half, they did it. Chemical company BASF provided the custom Rebelberry paint to get it ready for its appearance at SEMA. Only some of the professional and amateur mechanics, welders, and painters got to see the final build in person, but the results will last way past this show. This is more than a conversation starter.