Its latest high-tech, low-touch outpost is a collaboration with Amazon Go. 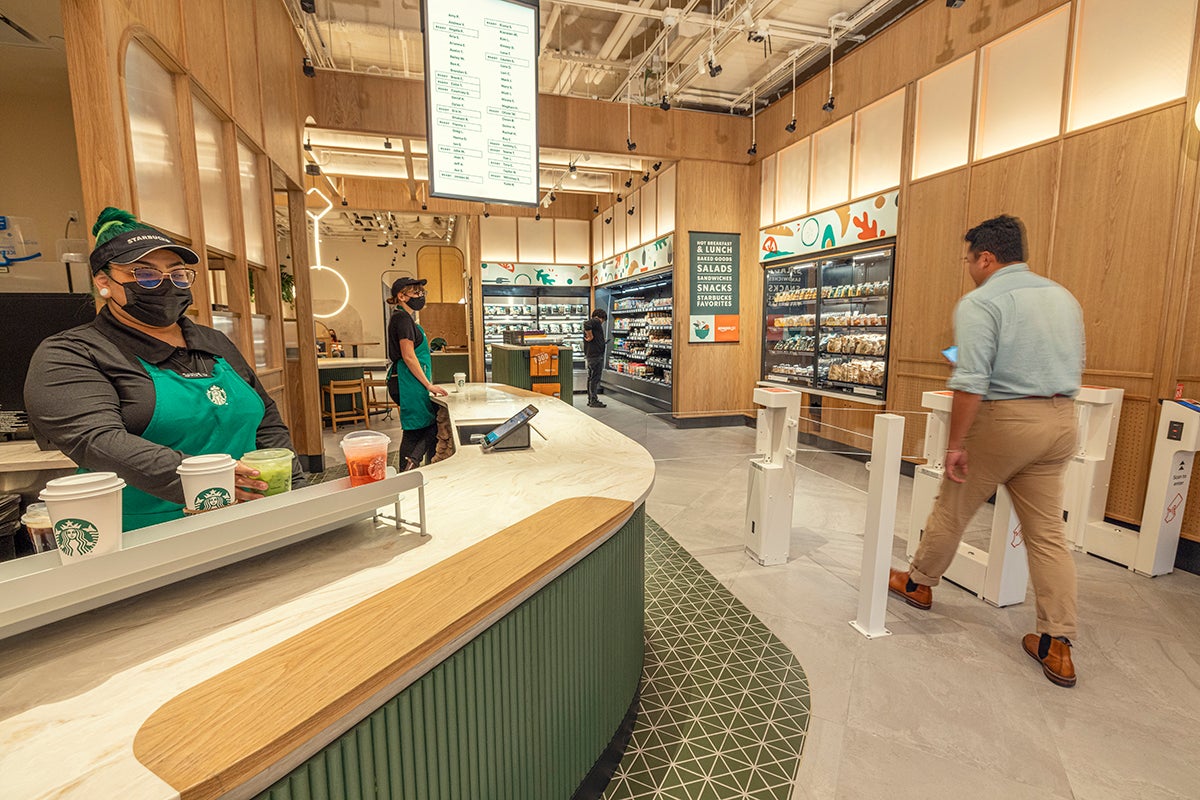 In this store, pickup your Starbucks and shop at Amazon Go. Starbucks
SHARE

Starbucks is adding new meaning to the idea of a coffee “to go” with its latest outpost in New York City. The store, which opened Thursday, is cashierless, meaning that customers can use the company’s order-ahead app and Amazon Go’s Just Walk Out technology to check out so they can grab a drink or snack without having to open their wallets in store.

Those that opt for using the Starbucks app will pick up directly from a barista, much like they would at a typical Starbucks store. The Amazon Go section requires customers to download the Amazon shopping app, add a credit card, and then scan a code to enter. Anything you take off the shelves in this area is added to your “virtual cart,” and after you leave,  the total price is deducted from your card on file within a few hours, according to Starbucks. And while the new outpost is called “Starbucks Pickup with Amazon Go,” there will also be seating for anyone interested in a more traditional coffee shop experience.

[Related: Venmo and Amazon team up to streamline your checkout]

Starbucks first announced it was planning to pivot to more grab-and-go-style stores last year in response to Covid-19’s impact on customer purchasing, as CNN Business explained, with stores reporting a significant shift towards takeout orders. According to a June 2020 federal filing, Starbucks is looking to open about 300 stores in this vein, though it’s unclear how many of those will utilize Amazon technology. The two companies did say they have additional stores already in the works for 2022, including another in New York City at Times Square. Aside from taking advantage of both company’s digital offerings, the locations give customers the option to purchase some sandwiches, snacks, and other items sold in Amazon Go stores alongside their Starbucks standbys.

Amazon had also previously announced intentions to expand its Just Walk Out technology beyond the company’s dedicated Amazon Go convenience and grocery stores. In March 2020, Reuters said Amazon had “several” signed deals to provide this system of cameras and sensors to other companies, though the retailer at the time declined to share names. More recently, Amazon announced it will be opening two of its Whole Foods stores with the technology in 2022.

There has been a notable shift towards cashierless models over the past year, with companies investing more heavily than previous years in robots and self-checkout systems in response to the new pandemic shopping landscape and labor shortages. And while Amazon’s Just Walk Out technology was a novelty when the first Amazon Go store opened to the public in 2018, ironically attracting lines just to enter the store, a number of other companies have since given cashierless stores a try. In fact, Starbucks competitor Dunkin’ already has its own cashierless California store utilizing Mastercard’s Shop Anywhere technology, meaning customers on both coasts who prefer a cup of coffee before human interaction are now in luck.