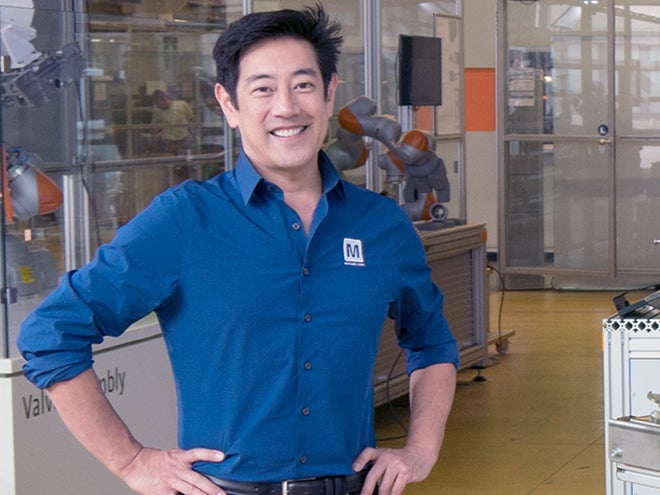 We often talk about robots working for us—even replacing our jobs, but what about robots as co-workers? At the KUKA development lab in Augsburg, Germany, scientists are building robots that can help professionals with tedious and dangerous tasks, leaving the humans to work on more complex problems in a safer environment. Grant Imahara traveled to Germany to learn more about the lab’s collaborative robot. KUKA has developed the first robot approved for human-robot collaboration (HRC): the KUKA LBR iiwa. LBR stands for “Leichtbauroboter,” German for lightweight robot, and iiwa is for “intelligent industrial work assistant.” The LBR iiwa has fast-reaction time and can easily find and handle delicate components. It can also learn new skills and retain knowledge just like a human employee and handle tasks independently. Collaborative robots are ideal for repetitive and dangerous tasks that can cause injury to humans and act as an assistant to human workers rather than a replacement. These robots also work side-by-side with humans, rather than in a separate part of a factory or behind safety gates. The LBR iiwa is part of what’s called Industry 4.0 (or Industrie 4.0), also known as the fourth industrial revolution, in which machines communicate and cooperate with each other and humans over the cloud. It has four tenets: interoperability, information transparency, technical assistance, and decentralized decisions. Incidentally, the term Industrie 4.0 comes from a German government project that looked at computerizing the manufacturing industry.

Grant visits the KUKA lab and talks about what it’s like for humans to collaborate with robots rather than supervise them, and how we can learn to coexist with robots, rather than to think about them in the abstract. The video also examines safety issues, how these collaborative robots differ from traditional “helper” machines, where the human-robot jobs are and how much of the workload robots should take vs. humans. Also, Grant explores the role of AI and machine learning as it pertains to the future of collaborative robotics.

The LBR iiwa is just a piece of how robots are changing our role in the world. Next, Grant is off to Japan to see how humans and robots are working together outside of the lab at a groundbreaking hotel.

Sponsored Content series is brought to you by Mouser Electronics and our suppliers Analog Devices, Intel, Microchip and Molex.