It's not politics. It's the internet. 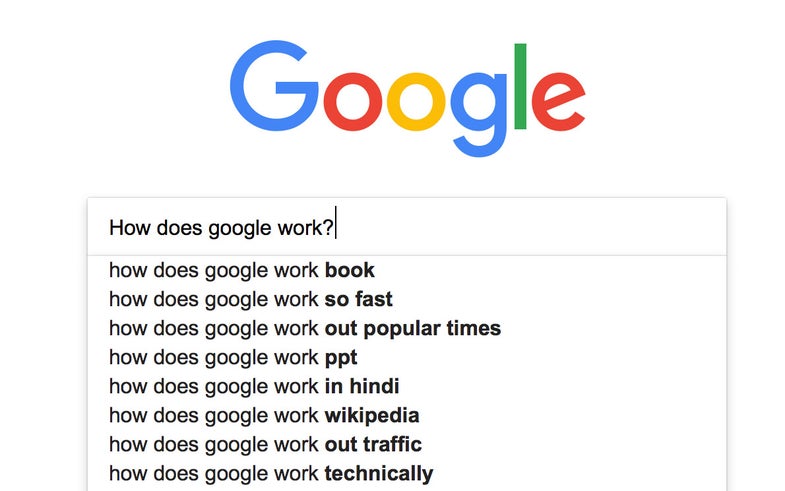 Google search powers trillions of inquiries a year, but for those on the outside of the company, precisely how that engine works is a mystery. Some people, like President Donald Trump, see political bias in this opacity. But while the exact algorithms that power Google search are unknown, the way it generally works—and some of its history—are knowable. And the fact that it is somewhat mysterious is actually a good thing for the average internet user.

Google’s search system is powered by proprietary algorithms that deliver results based on what it thinks the person wants in return. Broadly speaking, those hidden Google search engine gears are taking into account commonsense factors like key words—the terms that appear in an article’s headline, URL, and the body of the text—as well as the way websites link to one another. Further complicating the issue, a user’s specific Google results will differ as the company tries to customize results based on their web history or location. A search for “coffee” in Manhattan should deliver different results from the same search in Chicago. The algorithms behind that process are similarly veiled.

So while we don’t know exactly how Google’s algorithms work—and the company says it adjusts them hundreds of times per year—there are tactics that marketers and other professionals use to try to push their content up in the results. Search engine optimization (SEO) plays a large role in the order in which results appear, which means bigger companies with more resources to dedicate to the practice can excel. Powerful organizations might have entire departments dedicated to the practice, whereas smaller outlets rely on less effective tactics. At best, SEO is a good business practice, and at worst, an opportunity for savvy creators to attempt to cheat the system, which leaves Google in a quandary about how much info it should share in the first place—and reveals why it’s so important to have a search engine that privileges results that have earned their spot at the top of the rankings.

“It’s an ecosystem that’s pretty well understood, other than the algorithms themselves,” says Miklos Sarvary, a professor of marketing at Columbia Business School, referring to SEO and the algorithms the power Google search.

“Google’s objective is not to have some political outcome,” stemming from search engine results, Sarvary says, especially when it can, like any big company, lobby for their interests in Washington, D.C. “They have got other fish to fry than fool around with left-wing and right-wing political bias.”

“Their objective really is to satisfying the searchers,” he adds.

That analysis squares with Google’s official stance in response to Trump’s tweets; the company’s statement reads: “When users type queries into the Google Search bar, our goal is to make sure they receive the most relevant answers in a matter of seconds. Search is not used to set a political agenda and we don’t bias our results toward any political ideology. Every year, we issue hundreds of improvements to our algorithms to ensure they surface high-quality content in response to users’ queries. We continually work to improve Google Search and we never rank search results to manipulate political sentiment.”

It’s also worth pointing out that the term “bias” is different from “positive” or “negative.” In the case of search results, a “bias” would be an artificial ranking designed to promote a certain agenda; it is possible for search results to be both unbiased and largely negative or positive.

The issue remains that for a user typing a term into Google’s engine, the behind-the-scenes machinations are mysterious. But if they weren’t, people would manipulate the system to get their business’s website featured higher.

While today it’s become a politically charged topic, the roots of Google’s search engine technology date back to a much different era, when Google was in its infancy.

“Google’s big innovation at the time—and this has shaped the way that it approaches search ever since—is to look not only at the keywords that are listed on a page,” says Shuman Ghosemajumder, the CTO at cybersecurity firm Shape Security and the former Google “click fraud” czar, “but to look at how that particular page and site relates to the rest of the internet ecosystem.” For example, that was a step towards ensuring that a website that put a keyword in white text against a white background over and over again didn’t win the search results for that term.

Interestingly, the seeds of that work began with research that Larry Page, Google’s co-founder, was carrying out at Stanford University in the 1990s. He didn’t have search in mind then. “Amazingly, I had not thought of building a search engine,” Page said of that time period, according to Adam Fisher’s oral history of Silicon Valley, Valley of Genius. “The idea wasn’t even on the radar.”

But of course, the company did create a search engine, and today, Google describes what it does in general terms this way, from “Analyzing your words” to “Ranking useful pages” to “Returning the best results.”

“They don’t reveal everything that goes into the search algorithm, or all of the systems that power Google search,” Ghosemajumder says. “The downside of complete transparency would be gaming—you would have many people looking to take advantage of whatever they could that Google would reveal in order to try and come up higher on search results than would actually be justifiable or would actually be relevant for most users.”