It picks you up when you're ready to leave your hotel. 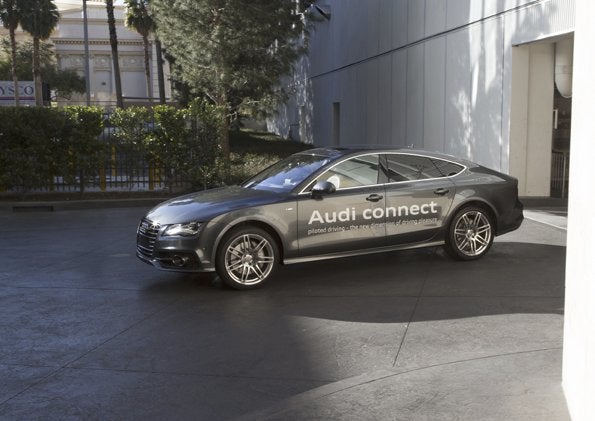 Move over, Google: Audi has demonstrated its own self-driving car here at CES 2013, although engineers involved with the project say its most likely a decade away from production.

Last year, Audi presented its vision of a “self-piloting” car, where the driver could choose to cede control to the car during a traffic jam, for example, taking over when he or she wanted to drive. “Our vision of piloted driving is when I don’t want to drive, I allow myself to be driven,” said Ricky Hudi, chief executive engineer of electrics/electronics at Audi AG, during a press conference here.

This year, those executives said, Audi’s self-driving car is a reality. A day after the press conference, Audi representatives showed off a stock Audi A7 sedan, equipped with additional sensors, in two settings: during a traffic jam, and negotiating the tight confines of a parking garage. Popular Science viewed the latter demonstration.

Here’s how it works: the autonomous cars that Lexus showed off, plus Google’s own Toyota Priuses, use Light Detection and Ranging (LIDAR) technology developed by Velodyne, which creates a “map” of the car’s surroundings using a rapidly rotating laser beam. At its press conference, Hudi said that Audi has developed its own, much smaller LIDAR that it intends to mount in the A7’s grille, eliminating the unsightly “can” at the top of other vehicles.

In the demonstration, Audi used a prototype smartphone app to “call” the car from a parking spot to the front of the Mandarin Oriental Hotel in Las Vegas. The car started by itself, eased its way out of the garage, turned a corner, and parallel parked. Audi then showed off the car returning to the spot, parked normally between two cars.

Automatic parallel parking is an optional feature on several cars, including European-specific Audi models, and the “radar” that Audi helped the car park are stock features. Negotiating rope obstacles, parking gates, and other cars required the car to “know” where it was at all times, however. Vehicle-to-vehicle communication was also used.

According to Audi senior engineer Annie Lien, Audi maintains several sets of test vehicles: a set for close-quarters perpendicular parking, and the “traffic jam” set, among others. The latter vehicles are equipped with several more sensors, including LIDAR, radar, and ultrasonic sensors. Although they can negotiate the state’s highways at whatever speed Audi chooses, Lien said they’re being tested only at speeds up to 60 km/h (37 MPH) or so. In 2010, however, Audi’s driverless car climbed the windy mountain roads of Pike’s Peak in 27 minutes, versus the 10 minutes or so the fastest human drivers require.

Why will it take a decade for self-driving cars to enter production? Two reasons: governments and miniaturization. Only Nevada is moving ahead with testing of autonomous vehicles, although California and Florida are not far behind. Also, according to Hudi, self-driving cars require a trunkful of electronics, in addition to the other sensors. Audi will need to hide that extra computing horsepower within the existing electronics to maintain the sense of effortless elegance the brand is trying to project.