An automatic pedestrian-detection system can warn drivers when people are likely to step out onto the road, and cushion a collision. 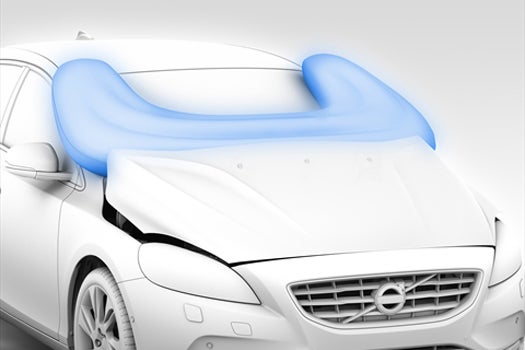 Volvo, the Swedish carmaker known for its safety engineering (a Volvo engineer invented the modern 3-point seat belt), has turned their focus to keeping those outside the car safe too. Starting with their Volvo V40, they’ve introduced the first car airbag for pedestrians.

First introduced at the Geneva Motor Show in March, the 2013 V40 has now gone on sale in Australia, though it likely won’t be sold in the U.S.

Though the National Highway Traffic Safety Administration reports that total traffic fatalities are decreasing, American pedestrian and cyclist fatalities have been on the upswing. Of the 32,367 traffic fatalities in 2012, 16 percent were not inside the car. Volvo is not the first automaker to try to design cars that are safer both inside and out.

In response to European Union pedestrian safety laws passed in the early 2000s, Jaguar began making some of its international models with a Pedestrian Contact Sensing System. It launches open the car’s hood if it senses pedestrian contact, hopefully softening the impact of a collision and preventing them from hitting their head on the engine below.

In November 2012, TNO, a Dutch company, debuted an airbag prototype designed to cushion bikers at the International Cycling Safety Congress.

Volvo’s system combines this type of technology with an automatic Pedestrian Detection system that can apply the brakes if a driver doesn’t respond in time to a person stepping in front of their car.

Radar within the grille of the car detects the distance between an object in front of the car, while a camera in the rear-view window determines what the object is. The system is programmed to warn a driver with sound and a flashing light if a pedestrian is likely to step out in front of the car. If the driver doesn’t respond and the system recognizes an imminent crash, it brakes the car automatically. It can also brake to prevent collisions with another vehicle.

The auto-detection system is designed for urban areas, and can stop a car at speeds up to about 21 miles per hour, or can slow it down at higher speeds. If it can’t prevent a crash, it deploys a pedestrian airbag outside the car. The pedestrian airbag system is active between speeds of 20 to 50 km per hour, or about 12 to 30 per hour — the speeds at which most pedestrian accidents occur.

Before the airbag deploys, seven sensors on the front of the car determine if a human leg comes into contact with the bumper. An airbag raises the hood of the car 10 cm and extends to cover part of the windshield, deploying in less than a second. The extra space between the hood and the engine compartment allows the hood to dent and cushions the pedestrian’s impact.