The Safer, Faster, More Efficient Commute Of The Future

Wouldn’t it be nice if your car and the road just got along? 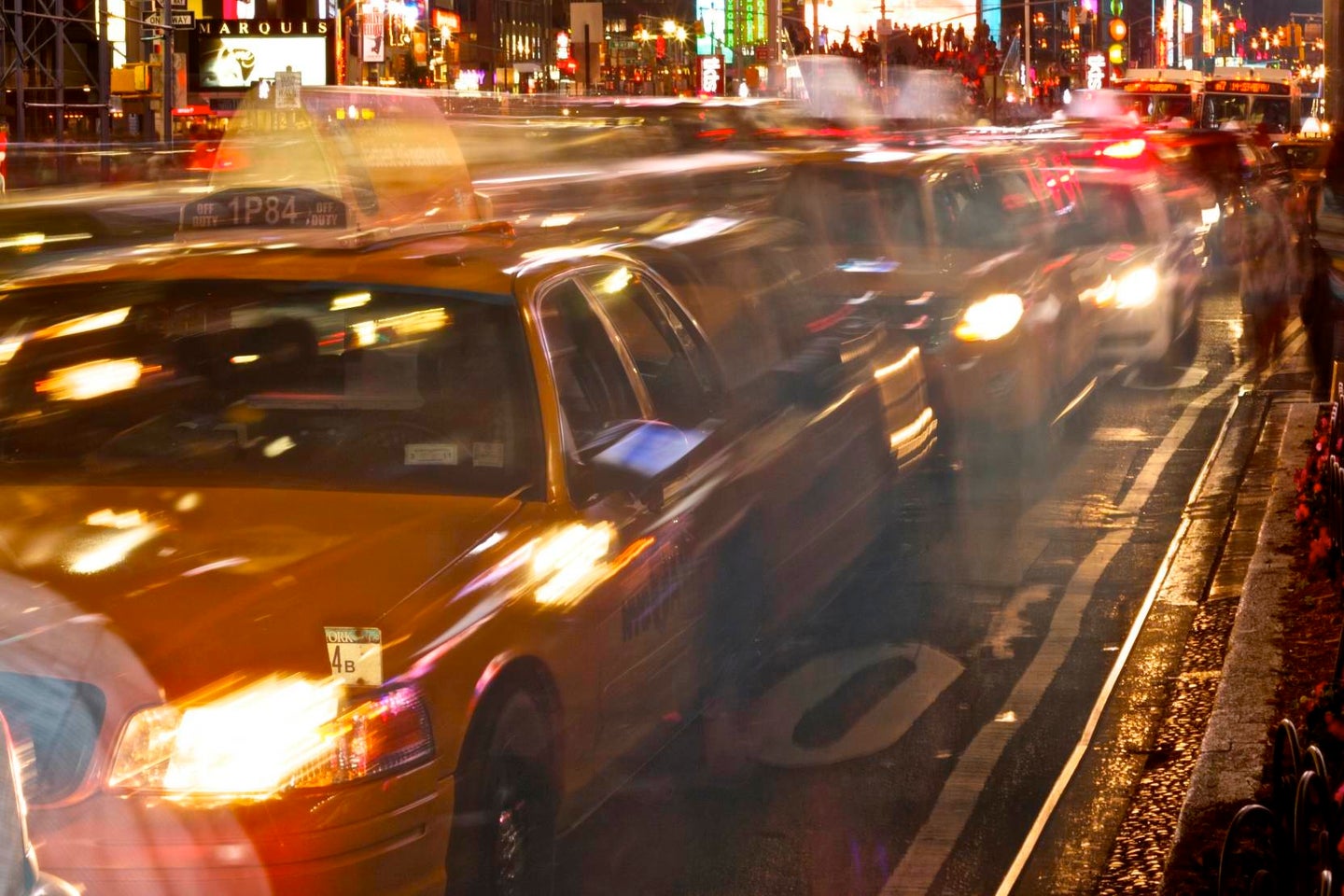 Traffic sucks. Even the Department of Transportation thinks so. Someday in the not too distant future–think somewhere between Uber picking you up when you’re drunk and the arrival of super fast self-driving cars–your commute might be very different.

Last week, IT company Cisco announced they’re selling a new suite of technologies that could improve traffic and car safety. One of the major components of their technology is increased vehicle-to-vehicle (V2V) communication. “Think of it as vehicles that are talking to each other,” says Susan Shaheen, a transportation engineer at the University of California, Berkeley, who was not involved in Cisco’s project.

Vehicles equipped with V2V technology can exchange information with similarly equipped cars, including their speed and location, hopefully making traffic move more smoothly, and preventing accidents caused by human error. Cisco’s group of technologies (including cameras, routers, and transmission devices) provide a way to integrate the V2V technologies that auto companies like GM are working on, to help them connect to each other and eventually to city infrastructure.

But what does it mean for you?

Let’s take a look at a day in the life of your future self…or at least the parts you’ll spend in your car.

8:06-8:20 AM: You haven’t had your coffee yet, and when you get to a stop sign, you don’t notice that the car in front of you has already started applying their brakes. Luckily, your car does notice, and it brings you to a stop just in time to prevent a fender bender. You pull onto the highway, and your car starts communicating with the cars around you, finding the ones that are going the same speed, and creating a platoon, minimizing stop-and-go traffic.

“We can all travel more seamlessly,” Barry Einsig, Global Transportation Executive at Cisco, tells Popular Science. Preventing car crashes is one of the main appeals of vehicle-to-vehicle (V2V) technology, which is growing swiftly. Researchers at technology research firm Gartner recently predicted that in five years, 250 million cars on the road will have a connection to the internet, making V2V communications easier, and hopefully preventing collisions.

Like Cisco and other companies, the government is banking on the idea that connected vehicles will make driving safer in the future. In fact, V2V may eventually become a requirement.

“V2V crash avoidance technology has game-changing potential to significantly reduce the number of crashes, injuries and deaths on our nation’s roads,” the National Highway Traffic Safety Administration’s David Friedman said in 2014, back when the administration announced their intent to encourage the use of the technology. “Decades from now, it’s likely we’ll look back at this time period as one in which the historical arc of transportation safety considerably changed for the better, similar to the introduction of standards for seat belts, airbags, and electronic stability control technology,” Friedman said.

8:20-8:40 AM: It is so tempting to use the High Occupancy Vehicle Lane, but you know cameras along the route will be watching, counting the number of people in your car. Since it’s just you this morning you decide not to risk the heavy fine. As you get closer to your office, an interconnected network of cameras finds an open parking spot near your building and your car directs you there. You park quickly and easily, paying with your phone or directly from your car.

Cameras are already everywhere, and soon they could be used in a myriad of transit applications, from monitoring highways for traffic, tolls and rule-breakers, to keeping an eye on urban traffic violations.

“Of course, there are privacy concerns that have to be addressed,” Einsig says. And he’s right—a network of cameras watching the roads sounds like something out of Minority Report, or any other dystopian-future movie ever made. But, as in the parking example, having a network of cameras watching traffic could be good for you. It can also be good for public safety. Traffic monitoring can help cities figure out where logjams are, reduce lines at tollbooths, and make it easier to locate cars involved in Amber Alerts.

Other companies, including Canada’s Miovison are also focused on developing traffic surveillance and data collection networks to deploy in cities.

7:00 PM: You’re leaving work a few minutes late for dinner. You get into your car and head for home. As you get to the end of the street, where you normally would turn right, your car lets you know that there’s been an accident two blocks away, and suggests that you turn left instead to avoid the traffic. In addition to redirecting you and other motorists, preventing slowdowns, a centralized system dispatches emergency vehicles to the crash. As EMTs arrive on the scene, the wrecked car has already transferred notable medical conditions (like allergies to medicine) to the emergency workers. Your car also notices that there are a lot of cars heading over the bridge along your detour, and warns you of the slowdown.

“You’ll be much more aware of these situations that are directed to your mobile device or your vehicle itself,” says Shaheen. “You’re getting more real-time information, and a set of different choices to pick from.”

Shaheen says that the interconnected technology could also be used to reduce carbon emissions caused by sitting in traffic jams or at stop lights. Less time on the road and less of an impact on the environment? Yes please.