Printing physical objects from data is about to transform our world. As told by Hugh Evans 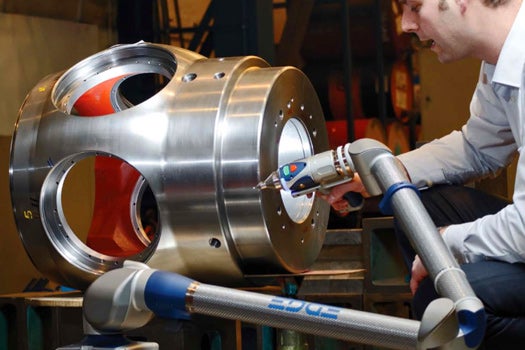 Hugh Evans is a vice president at T. Rowe Price Associates. He is the lead portfolio manager of the Distribution Management Service, and serves on the Investment Advisory Committee of the Small-Cap Value Fund and Small-Cap Stock Fund.

I have a pretty unique perch at T. Rowe Price, as the person who’s got one foot in the public markets and one foot in the private equity markets. I scan the venture capital world to make sure that we’re on top of these private companies that the venture capitalists are creating, and get to know them two, three, four, five years before their IPO (Initial Public Offering).

It’s a very useful knowledge pipeline for us, to watch developments through the eyes of the venture capitalist, and I’ve seen a lot of the most exciting things coming out of private equity.

From my vantage point, 3D printing is right up there as one of the most exciting innovations I’ve seen in the 20 years I’ve been around here. I think it’s going to change the way goods are manufactured across many industries.

In order to wrap your head around this, file away what your mind tells you about printing or pictures. A normal printer squirts ink onto paper, but a 3D printer layers atoms on top of each other to create (or print) actual objects.

I can explain this in more detail by taking us through the history of the 3D-printing industry. What we now call 3D printing was called rapid prototyping for many years. An engineer would design an object as a CAD (computerized aided design) file, and then send that file to a machine to produce the real thing.

But for years, the plastics and the metals that were used were just not robust enough to create a prototype that you could be proud of. They resembled paraffin waxes. They could create the parts, but those parts tended to be flimsy. Because the end product didn’t have structural integrity, the technology was really just for engineers who were creating a product in CAD and needed to see what it looked like in real life.

The revolution took place when companies like 3D Systems started designing radically new materials. They came up with nanocomposites, different blends of plastics, and different blends of powdered metals. They were then able to create a part that, if you held it in your hand, you’d think it was steel. You can throw it down on the ground against cement, and it looks and acts just like steel.

It’s impressive how the industry has graduated from flimsy, waxy plastics to very, very robust materials that can literally be used as a machine part, rather than just a prototype of a part.

THE FUTURE IS NOW

And so the invention of these new materials has allowed this industry to go from being bottled up in the lab to what many people call DDM—Direct Digital Manufacturing—and others call “additive manufacturing.”

These new materials allow this 3D printing to be adopted by aerospace, automotive. Jaguar is using the technology for rapid product development. So is the Bell Helicopter division of Textron.

It’s amazing. I was at an event recently where these guys from Barcelona had a game console with a camera attached, and had sort of rejiggered it. For fun, they’d take a picture of you with it, and then print it on a 3D printer. The things some of these people are doing—it’s just amazing.

It’s pretty intuitive to apply this technology to the automotive and aerospace industries, and jewelry has always been a big market. But one of the most exciting areas is actually dental fabrication.

You might already have a crown that was built by a 3D printer. Five years ago, that crown would have been made by hand—hand-sanded and hand-created. This technology is taking over that task. Now you go to the dentist, and you don’t bite into the clay anymore to make a mold of your mouth. Your dentist just wands your mouth with the 3M wand and makes a digital file of your mouth. It happens instantly, and then the dentist teleports that CAD file and has the implant at his office the next day.

One company I’m excited about is using 3D printing to make prostheses. It’s a venture-backed company in San Francisco called Bespoke Innovations. There are a large number of amputees in America and around the world—I believe something like two million people have some sort of prosthetic limb or device.

The prosthetics industry had always been one-size-fits-all, but now they are taking Army vets and other people who need prostheses, taking a lot of measurements of their body movements and angles, and building custom limbs. Not every leg extension is the same. Some have different weight-bearing characteristics, different angles, a different way the feet move. Bespoke Innovations takes all this ergonomic information, imports it, and creates a CAD file, from which they can literally print out the limb that is used by the customer. (For more on 3D printing and medicine, see our article at T. Rowe Price Connections .)

That, to me, points the way to what’s so exciting about the field. It’s the epitome of mass customization: a product that is relatively similar for most people, but customized to fit you and your specific needs.

THE PROMISE OF INSTANT CAD FILES

The other thing that’s accelerating the industry is the development of laser scanners. A company called FARO Technologies produces a handheld laser that you can point at an object, and the laser will create a CAD/CAM file of what you’re pointing at in real time.

The data from the laser reading is imported into a CAD/CAM file, and so you can instantly create a CAD/CAM file with this laser technology. Even the labor intensity of creating a CAD file is reduced as you can create instant CAD files through this device.

So now you can picture yourself walking down the street, point, click, get a CAD file, and click again, and it’s printed out an hour later. You saw a flower, you pointed and clicked, and now you’ve printed a replication of that flower, and it’s on your desk.

A concern with these wands is how they fit into our notion of intellectual property, and how patent law is enforced in a world where people are empowered to replicate real-world objects on their own. It’s a conversation that we’ve had around digital copyrights for years, but we should expect to see it cross over into the analog world as well.

That will be a concern, especially as the capabilities of this technology continue to develop. But even now, you can go on YouTube and search for keywords like “3D printing and dental,” or other related keywords, and you will find so many clips in which you can actually see the process.

Six years ago the cheapest machine out there was $30,000, but most were $100,000. Today you can get a capable 3D printer for around $1,299, which launched at the Consumer Electronics Show this year.

At that price, the marketplace opens up to individuals like us. It could be as soon as three years from now that people will have a 3D printer at home to make toys, napkin holders, curtain rings, and whatever is needed.

That’s why 3D printing is so interesting. It’s not just tied up in the engineering world anymore. It’s impacting a large number of industries, and becoming more relevant to consumers. I’m seeing that even high schools now have 3D printers. I just ran into a high school teacher the other day who teaches software classes, and he was telling me, “Oh, I just bought my first 3D printer.”

It’s exciting to see this technology begin to reach its full potential. A few years ago it was a little ahead of its time, but not anymore. It’s here today.

For more on 3D printing—as well as other installments of T. Rowe Price Connections, an ongoing series about finding opportunities in the global economy—
click here.

Investing in small companies involves greater risk than is customarily associated with larger companies. Stocks of smaller companies are subject to more abrupt or erratic price movements than larger-company stocks. Small companies often have limited product lines, markets, or financial resources, and their managements may lack depth and experience.
3D Systems composed 0.75% of the T. Rowe Price Small-Cap Stock Fund’s portfolio and 1.88% of the T. Rowe Price Small-Cap Value Fund’s portfolio as of June 30, 2012. The following securities were not held by either one of the funds as of June 30,2012: Bespoke Innovations, Jaguar, Bell Helicopters, Faro Technologies. The manager’s views and portfolio holdings are historical and subject to change. This material should not be deemed a recommendation to buy or sell any of the securities mentioned.
T. Rowe Price Investment Services, Inc., distributor.