It will likely command a hefty price hike on a car that's already well over $400,000. 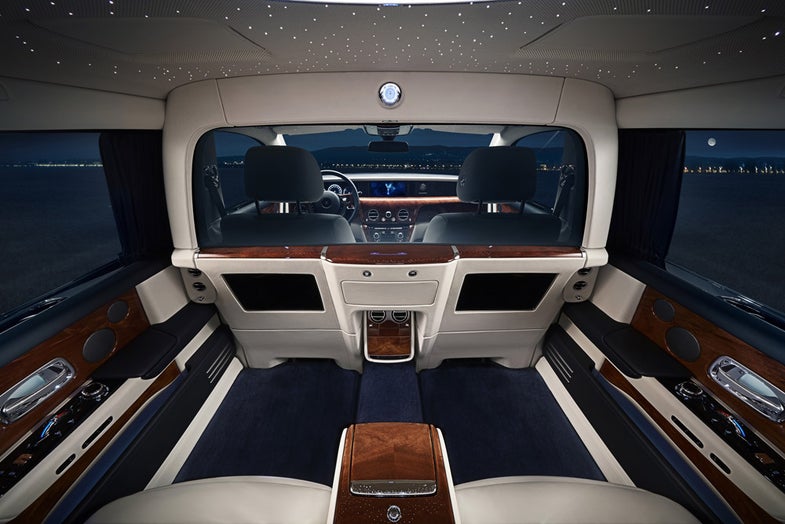 The Rolls-Royce Phantom is, according to Rolls-Royce (and my ears), the quietest car in the world. The Phantom’s engineers saved several hundred pounds of weight by building the new vehicle with more aluminum and less steel—and then promptly reinvested all the weight savings into more sound dampening. They only stopped making the cabin quieter when it started to impede the ability of the driver to hear approaching emergency sirens.

According to Rolls Royce, the 2018 Phantom has almost 300 pounds of noise insulation built-in. Areas of the car like the bulkhead have double layers of alloy “skin” with sheets of foam and felt in between to keep the sounds of the road from making its way into the rolling mansion. The windows are made from triple-thick 0.2-inch glass. Even the tires have an extra layer of foam inside to significantly damp road noise in the cabin.

But the clever engineers in Goodwood, home of the Rolls Royce headquarters, realized that being able to hear a siren only matters to the driver. As an awful lot of Phantom owners have a chauffeur, adding more privacy for those in the back is a natural next step.

That’s why Rolls-Royce has the new Privacy Suite, an option for the new Phantom that cocoons the rear passengers in a glorious bubble of isolation. It physically separates the front and rear cabins with a new wall and electrochromic glass panel. It allows those in the rear the choice between seeing the road ahead or, with the flick of a switch, to frost the glass and keep the driver from seeing what’s going on in the back seats.

A “frequency-specific compound” keeps voices from making it up to the driver, too. There’s an intercom though, allowing passengers to call Jeeves at will, though the chauffeur will need to request permission to talk to the boss.

An opening in the wall allows items to be passed between the front and rear cabins. In its press release, Rolls-Royce notes that the aperture is “discretely illuminated to ensure passengers are satisfied with the nature of the documents or objects before they receive them.” Excellent.

Rear privacy curtains are equipped to the Privacy Suite as well, allowing passengers to block out the entire world for privacy while they… well, we’ll never know, will we?

Pricing wasn’t disclosed (if you have to ask…) and it isn’t even available in the U.S.A. because it doesn’t comply with requirements for side-impact airbags. Privacy obsessed Americans will have to wait for Rolls-Royce to come up with a cone of silence, I guess.