Dive into the wonderful and wistful world of video game design

MoMA’s new exhibit features 35 notable games plucked from across the years, many of which you can play. 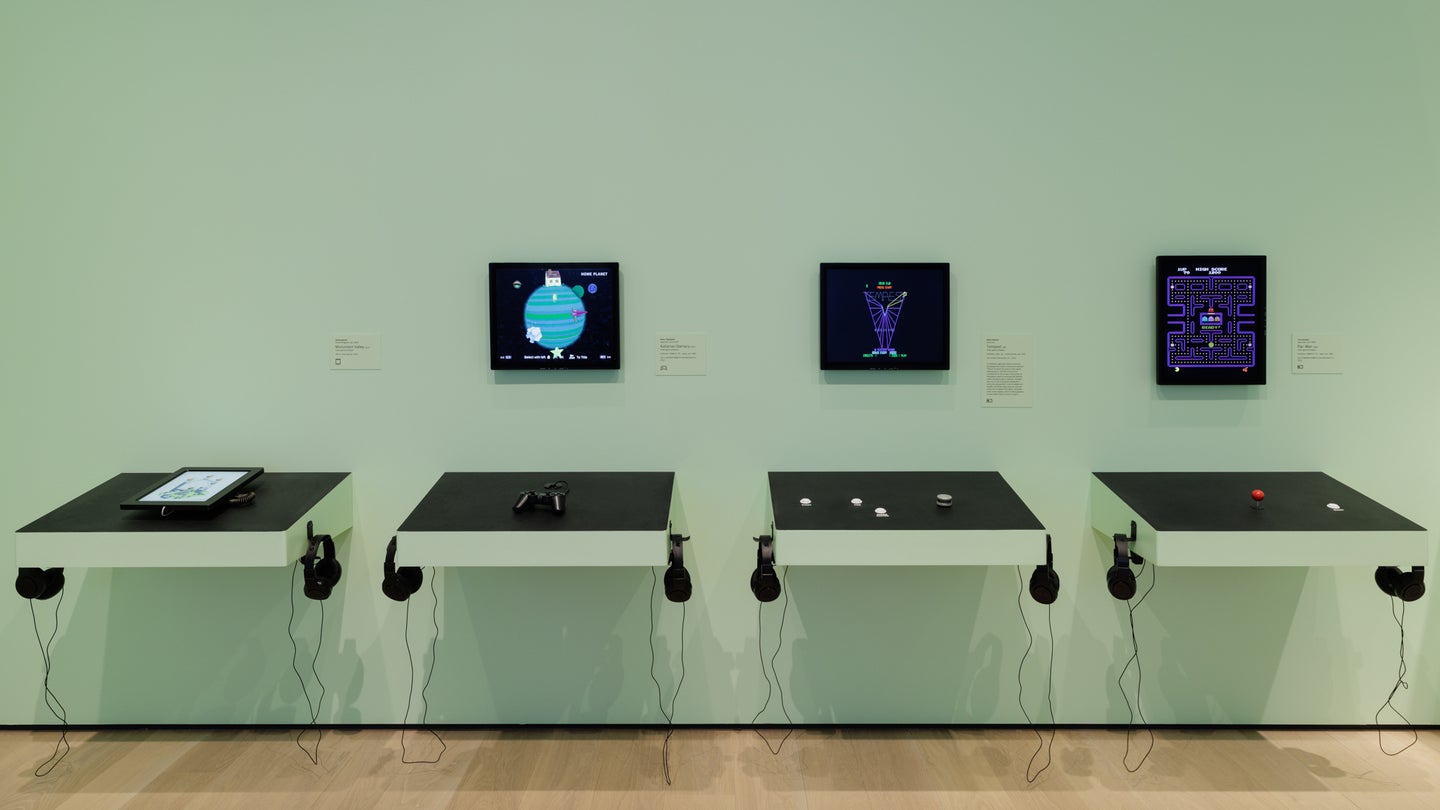 Is it me, or does it seem like the vaporwave aesthetic is once again in vogue? I’m seeing resurging interest in neon colors and signs, as well as fashion trends that have been dormant for more than a decade. An artist I saw in concert this summer projected an early computer screen and a play-through of the “Pac-Man” game during their set. We could chalk it up to the pandemic-induced collective nostalgia, but there’s a certain emotion evoked by watching the iconic glowing characters lag their way across the screen.

It’s the same feeling I get as I stare at the introductory plaque that greets visitors at a new exhibit at the Museum of Modern Art in NYC. The logo, printed in black, is interspersed with phosphor-green animated graphics, featuring familiar figures from “Pac-Man,” “Pong,” “Tetris,” and “Space Invader.”

The exhibit, titled “Never Alone,” is dedicated to 35 video games plucked from different points in time between 1972 and 2018, and it’s a showcase of the intents and executions of interactive design. It’s opening this weekend and is free for the general public.

“Interactive design is so present in our lives. Here, you have video games, but everything, from the MetroCard machines we’re set to lose, to ATMs, to the website of the government, is interactive design,” says Paola Antonelli, senior curator at the MoMA. “We are emphasizing video games’ place within a larger discussion about design, art, and culture.”

Video games are a good way to examine how humans interface with technology and each other. They contain channels through which users can communicate with others and port into digital universes; and they can shape people’s perceptions with just a few lines of code. The games that MoMA selected were judged on their aesthetic, narrative, and technical qualities—the creativity of their codes, choreography of player behavior, and use of space.

It’s easy to discount video games as works of serious art. But in recent years, beyond play, games and video games have attempted to prove themselves as viable channels for preserving, commenting on, and engaging with culture. The exhibit itself is named after the newly rereleased video game “Never Alone,” created by Kisima Inŋgitchuŋ in 2014. In it, users follow a young Iñupiat girl as she searches for the source of an environmental disaster.

“Never Alone” is organized in a way that allows visitors to understand how different aspects of video games come together. One section, called “The Input,” examines the ways in which users physically interact with video games through objects like keyboards, knobs, joysticks, touchscreens, or the clicky wheel of the original iPod.

Another section, called “The Designer,” focuses on the dialogue a designer creates with a user, the spaces that they construct, and all of the various strategies that they use to make the game accessible (or abrasive).

The third section is called “The Player,” highlights the role of player performances, and how individuals can put their own personal spins on games like “SimCity” and “Minecraft.”

To tie together everything sonically, as you would in a game, a score composed of different morsels from the 35 video games’ soundtracks is broadcasted through the exhibition.

There are other related works included in the exhibit as well, such as the @ sign. The @ sign is a story of a timeless symbol that was redefined when Ray Tomlinson used it in 1971 to connect the name of the person to the name of the machine. He adopted the symbol as a stand-in for technical programming language in the development of the US government’s Advanced Research Projects Agency Network’s email system.

Other works of note are the sketchbooks of Susan Kare, the original artist who designed icons for Apple’s first computer operating system, the Macintosh, and a series of robots.

The delicate art of engineering and game design

For those who don’t consider video games to be engineering marvels, it’s helpful to note that the first documented video game was created in 1958 by a nuclear physicist at Brookhaven National Laboratory. It takes hard science to create realistic worlds, movements, and graphics. All the commands, gameplay, objects, sonics, storyboards, rules, scenarios, rewards, and responses had to be programmed—pixel by pixel, bit by bit. Since the genesis of video games, design and engineering have been intertwined.

“Especially to a design person, technology has always existed. It was not always digital, but it was always there. It was always a way to document culture, and a way for artists and designers to actually express the possibilities of an era,” says Antonelli. “I feel that many of the video games that you see here really try to push with their elbows to the limits of the technology at that time.”

Video game design co-evolved with engineering breakthroughs. And although the technology set certain boundaries on what designers could do, this exhibit aims to show how well designers used the tools at their disposal to captivate people.

“You can argue that there is the same level of sophistication in Asteroids and in EVE online, just there was a different technology that was available,” Antonelli says, considering that back the 1970s, users could not network computers and did not have a whole web to link up people and exist in a world onto its own. “When you see something like Pong, that’s an amazing game for that time.”

One of Antonelli’s favorite games from the exhibit is “Tempest,” created in 1981 by Dave Theurer. It emulates Theurer’s childhood nightmare about monsters emerging from a hole in the ground, and was one of the first games that used one-point perspective to produce an illusion of dimension.

“Pac-Man,” the greatest selling arcade of all-time and a playable game on display at the exhibit, is another example of this ingenuity. Players advance through dot-filled mazes by avoiding ghosts and eating fruits and power pills. “It’s a cultural touchstone but it also is a brilliantly designed game. Toru Iwatani designed different behaviors for every one of the ghosts—there’s an algorithm that governs the behavior of each one,” says Paul Galloway, collection specialist at MoMA. “The red one is hyper-aggressive and will always come after you. The blue one is kind of a space cadet and gets confused really easily. It’s this game that was coded on a minuscule amount of RAM, and he was able to eke out, essentially, a kind of AI behavior from each little ghost.”

And Keita Takahashi’s nonsensical and silly game “Katamari Damacy,” where users roll up clutter and shoot the clutter-ball into the sky to make stars, has “this magnificent use of physics that’s going on with rolling things into a ball, and then the ball exerts more gravity, and it grabs more things. So it’s a combination of a delightful sense of play with some very serious game mechanics,” Galloway says.

The challenges of preserving games across the eras

To preserve and display the games, MoMA worked with IT experts, outside gamers, game designers, digital conservators, and general counsel (because acquiring games means acquiring the relationship with the company). Since the physical components of video games have changed dramatically over time, there are a unique set of challenges for preserving each entry.

“In one way, preserving Pac-Man is easy because it’s a small amount of code and it’s a really simple system. On the other hand, if you want it to be accurate, you’re dependent on other components that wear out faster and just aren’t really designed to last for hundreds of years,” Galloway says.

For example, “Monument Valley,” a game where users have to guide a princess through M.C.-Escher-like structures with swipes and taps, is designed to be played on a touchscreen. That means it has to be either on the Android system or iOS. “There’s already cases of games that came out on iOS in 2010 that don’t work anymore. And without Apple continuing to support these older systems, then you’re dependent on them,” says Galloway. “There’s a wealth of online communities that are making emulators and making sure that all the cablings from the 70s, 80s, 90s, are still working. You can play things on Playstation emulators and Nintendo emulators. That’s not really as much of a thing for iOS games or Android games.”

That’s why MoMA has been working closely with the companies behind the games to keep various avenues of preservation open.

An unusual cornerstone of community

Outside of the human inventiveness behind their hardware and construction, video games are considered culturally valuable because they’ve become a lens through which researchers study culture, and subculture, both online and off.

Galloway grew up in the era of arcade cabinets in the 80s, where nearly indestructible “Pac-Man” machines braved the tirade of tipsy customers and wailing children, and where “Street Fighter” became a cultural zeitgeist.

“There was a kind of really amazing culture and community that developed around that, but those were still relatively local and small scale,” Galloway says. That has changed in some ways, but not so much in others. He notes that when his son plays Roblox or Minecraft, he’s often on a call with a friend, or meeting people via a digital community. “There’s far more people playing together than before there was internet connectivity.”

Shared online spaces have flourished on platforms like Discord, Twitch, and YouTube. And internet moments have bloomed around “Untitled Goose Game,” “Among Us,” and “Minecraft,” just to name a few, especially so during the pandemic, when much of human interaction shifted to screens. Video games, too, are continuing to evolve with the increasing commonplace appeal of newer tech like virtual reality and augmented reality.

Now, more than ever, humans are becoming increasingly aware of how much digital interfaces permeate everyday life. The lasting influence of video games on their design can be observed everywhere. Gamification can be seen, as well, in the user experience design of many non-game platforms today, like the language-learning app Duolingo. This appealing element takes a a great deal of thought, inspiring backstories, and investments to iterate. Orchestrating the way in which different software, hardware, and human responses come together is an experiment in art and science.

Never Alone: Video Games and Other Interactive Design will be on display at The Museum of Modern Art in Manhattan, New York through July 16, 2023.